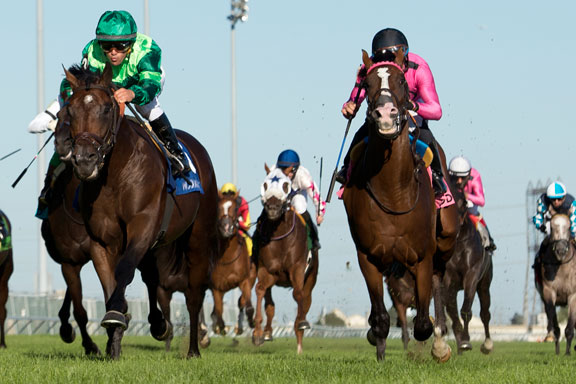 Fog of War, bet hard off of a debut win sprinting on the Saratoga turf, gave his backers some anxious moments before ultimately proving best in Sunday's GI Summer S. at Woodbine and locking up his spot in the GI Breeders' Cup Juvenile Turf.

Rallying from off the pace to score by a neck in a rainstorm Aug. 13 at Saratoga, the $400,000 Keeneland September buy was well-backed throughout the wagering stretching out to a mile here and broke well as the clear favorite. Finding a cozy spot through from third in the pocket through a :23.36 quarter, the bay dropped back a spot past a :46.20 half as longshot pacesetter Wallace (Run Away and Hide) made a break for it. Saving ground while patiently handled on the turn, he idled for much of the stretch drive, but accelerated when coming off cover at the eighth pole to overtake War of Will despite racing on his left lead and eke out the victory.

“I like the way he did it,” winning rider Javier Castellano commented. “He's a very talented horse and I think the key was I tried to teach him something for the future, for the next race. It's the kind of horse that you don't want to be on the front with everybody chasing, you want to teach him something and let him win the race and go forward. I think he's got a lot of potential and he's coming around very well.”

Fog of War is the 18th Grade I winner for his superstar sire and is the second foal out of Coolmore's G3-winning Say, following SW full-brother Naval Intelligence. He has another yearling full-brother who sold for $500,000 to Cromwell Bloodstock as Hip 371 Tuesday at KEESEP. Say was bred to American Pharoah this spring. Second dam Riskaverse was a dual Grade I-winner on turf who went for $5 million at Fasig-Tipton November in 2005. This is also the extended female family of dual champion Havre de Grace (Saint Liam) and MGISW Tonalist (Tapit).