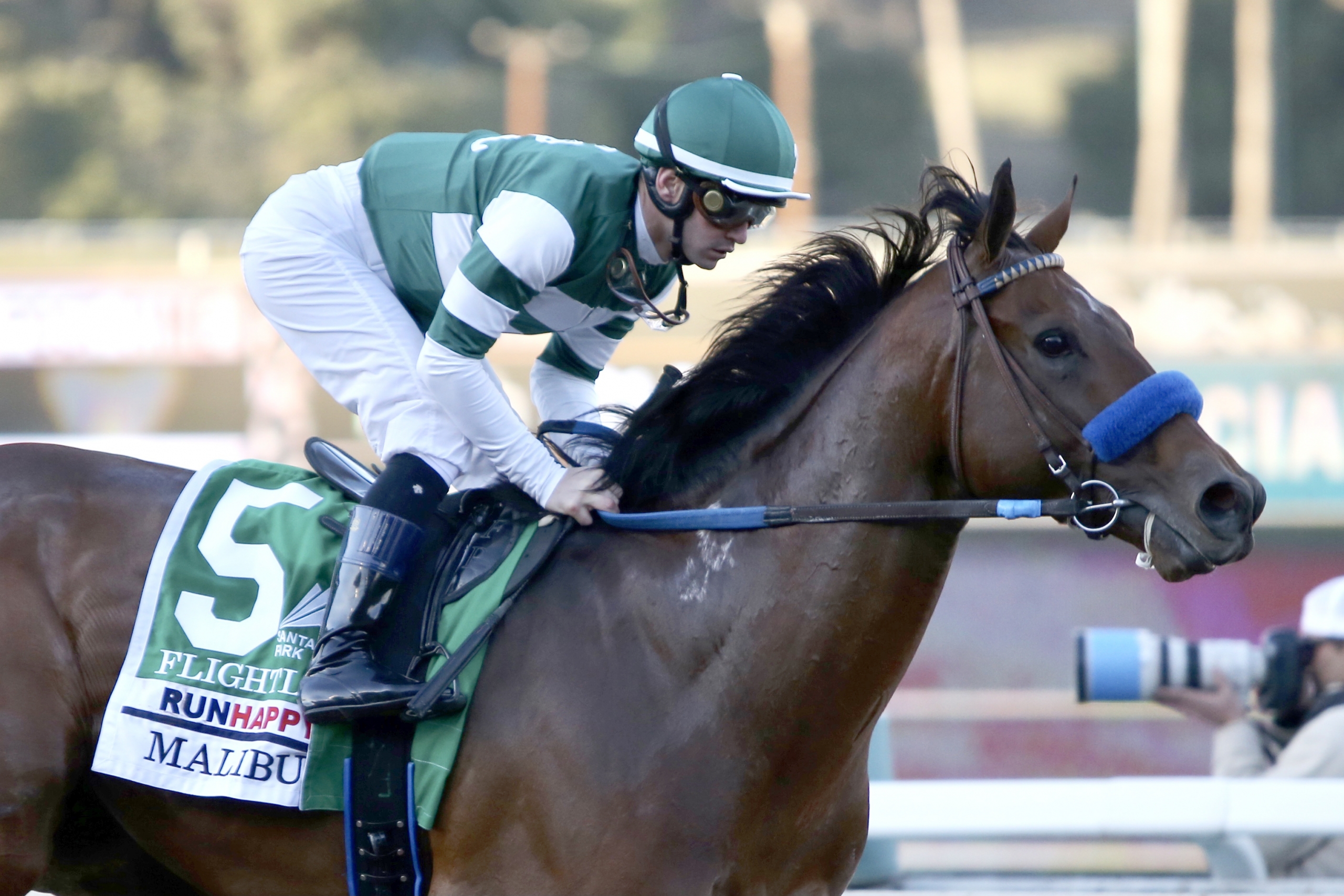 Flightline (Tapit), who had given hints of greatness while opening his career with two supremely easy victories, officially arrived with an eye-popping victory in the GI Runhappy Malibu S. at Santa Anita Sunday.

For Bill Farish of co-owner Woodford Racing, the Malibu result confirmed the faith his team has had in the colt all along.

“We hoped to win this, but to do this against this kind of field, this was the real class test for him and I think he answered it the way we thought he would,” Farish said.

Off a touch slowly, the bay recovered and clicked off an opening quarter in :22.01 and a half in :44.48 while under an easy hold. Asked to lengthen once heads were turned for home, Flightline continued to widen on the front end without being asked a single question by Flavien Prat and coasted under the line 11 1/2 lengths clear of Baby Yoda (Prospective). The final time, over what was a dull strip during Sunday's program, was a spectacular 1:21.37, better than three seconds faster than the time recorded by Kalypso (Brody's Cause) in the GI La Brea S. a couple of races prior.

“I was in cruise control the whole race, galloping freely,” Prat said. “He was quite impressive. I wanted to get a good position and get myself into the race. My idea was to get out there running and see what happened. He has been brilliant so far. He really has been quite amazing.”

A $1-million graduate of the 2019 Fasig-Tipton Saratoga sale, Flightline earned no-doubt 'TDN Rising Star'-dom with a 13 1/4-length romp on his local debut Apr. 24. Gone for some 4 1/2 months thereafter, Flightline resumed with a 12 3/4-length success in a first-level Del Mar allowance Sept. 5, prompting questions on whether a Breeders' Cup appearance might be in the offing. After some deliberation, connections demurred, opting to train up to Sunday's race.

“I've been stressing the last 20, 30 or 40 days getting ready for today,” trainer John Sadler admitted. “There is a lot of pressure on you, but it is the pressure you want. It's like the high school coach for LeBron. You know you have something special and he is much the best. This horse is there. You just don't want to screw it up.”

As for where his budding superstar might appear next, Sadler said, “The next race is up to the horse. We have to be true to the horse. We will chart the course from there. This horse is so brilliant. This is not an ordinary horse, this is a very special horse. We want to do right by the horse and all other things will fall into place.”

Feathered, who was second in the 2015 GI American Oaks, has a yearling full-brother to Flightline who RNA'd for $390,000 at this year's Fasig-Tipton Saratoga Sale, and a weanling half-brother by Curlin. Her 2-year-old colt by Pioneerof the Nile was exported to Russia after selling for $100,000 at last year's Fasig-Tipton October sale. Feathered, who was purchased by Jane Lyon's Summer Wind Farm for $2.35 million at the 2016 Keeneland November sale, was bred to Into Mischief this year. Flightline is the 95th graded winner for Tapit and the first out of an Indian Charlie mare.