Fleet-Footed Volatile Goes for Grade I Glory in Vanderbilt 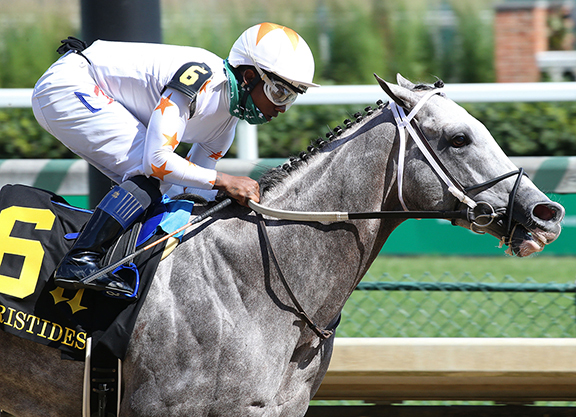 Of the five horses signed on for Saturday's GI A. G. Vanderbilt H., two are already winners of Grade I races at Saratoga, and a third has been successful at Grade III level while placing in Grade I company. In a different year, any of the three could go favored in the six-furlong dash, but not this one, as they all have the very exciting and very fast Volatile (Violence) to beat.

His sire's priciest offspring, having fetched $850,000 as a Keeneland September yearling nearly three years ago, the gray colt hinted at a fair bit of ability last season, winning two of his three starts with an upward Beyer trajectory. He has been nothing short of sensational in two outings this season, good for a 7 1/2-length allowance victory at Oaklawn Apr. 24 before rolling home to score by eight lengths in the June 6 Aristides S. at Churchill. In the latter event, Volatile was just off a half-mile split of :44.38, but nevertheless sprinted his final two panels in a spectacular :23.19 to earn a 112 Beyer. A repeat or even a slight regression will make him his sire's second Grade I-winning sprinter in the last month (No Parole, Woody Stephens S.).

The evergreen Whitmore (Pleasanty Perfect) scratched from a Keeneland allowance in favor of this spot. The 7-year-old made the most of his lone Spa appearance to date, coming from off the pace to win the 2018 GI Forego S. The chestnut was typically brilliant over the winter at Oaklawn, where he won the GIII Count Fleet Sprint H. for the third time in four years Apr. 18. The in-form Joel Rosario takes over at the controls.

Mind Control (Stay Thirsty) is a dual Grade I winner at the Spa, having annexed the Hopeful S. in 2018 and last year's H. Allen Jerkens S. Winner of the GIII Toboggan S. and GIII Tom Fool H. at Aqueduct over the winter, the bay may not have handled the off track when a well-beaten sixth to subsequent GI Runhappy Met Mile hero Vekoma (Candy Ride {Arg}) in Belmont's GI Carter H. June 6.