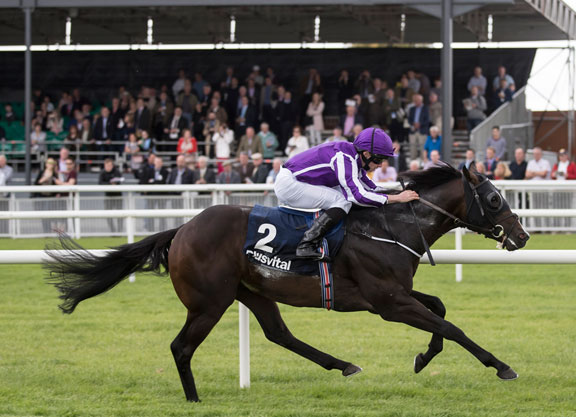 US Navy Flag (War Front), who won the G1 Middle Park S. and G1 Dewhurst S. last term, could head for the G1Tattersalls Irish 2000 Guineas at The Curragh on May 26 following his “inconclusive” fifth-place run in Sunday's French equivalent at ParisLongchamp. The US-bred made much of the running in the Poule d'Essai des Poulains, but stumbled rounding the home bend and after meeting interference in the final furlong, passed the post in fifth place. Several jockeys subsequently voiced their concerns about the condition of the ground, which led to a 30-minute delay to the French 1000 Guineas and a change of course.

“We were happy with his run, considering what happened,” said trainer Aidan O'Brien. “We didn't say anything when he came in at all, but these things happen. We went there to see about the mile, but it was a little bit inconclusive. He might come back to the [G1] Irish Guineas if the ground is nice [on May 26], then we could look at [Royal Ascot]. The Irish Guineas will tell us whether we go sprinting or stay at a mile.”