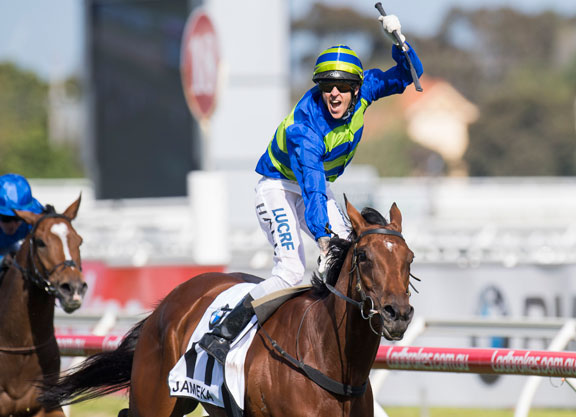 A Handicap is a Handicap…

When previewing a Group 1 race, it is all too easy merely to try to find the best horse in the race. That’s obviously fair enough; but when it is a Group 1 handicap, the situation is no different from any other handicap, i.e. that the key is generally to find the best-handicapped, rather than merely the best, horse.

Ever since Jameka (Aus) (Myboycharlie {Ire}) landed the G3 Naturalism S. at Caulfield on 17th Sept., the 4-year-old loomed as potentially the blot on the handicap for the G1 BMW Caulfield Cup. That day she dominated a field deep in both quality and quantity under 55.5 kilos, so the drop to 52.5 kilos (115.5 lb) was eye-catching. In fact, even without the affirmation of her ability which the Naturalism S. provided, her form at both two and three made the 52.5 look very lenient.

As a 2-year-old, Jameka had taken the second most prestigious juvenile race in her home state of Victoria, the G2 VRC Sires’ Produce. At three her Classic form in both Victoria and New South Wales was rock-solid. In Melbourne, she finished second in the G1 Thousand Guineas at Caulfield before taking the G1 Victoria Oaks at Flemington; in Sydney she finished third in the G1 Rosehill Guineas, second in the G1 Australian Derby and fourth in the G1 Australian Oaks. 52.5 in the Caulfield Cup? Go home, you good thing!

As a Group 1-winning grandson of Northern Dancer (Nearctic) from the immediate family of Northern Dancer, it was easy to predict from the outset that Danehill (Danzig) might become an influential stallion. When he sired the G1 Golden Slipper winner with each of his first three Australian crops (in 1994, ’95 and ’96) such a prediction seemed set to come true in glorious style. We now know that Danehill was not merely an extremely good sire of 2-year-old sprinters: he made a mighty mark as sire of sprinters and stayers and of stallions and broodmares. In short, he was a massive influence for class.

Danehill did not enjoy the same instant success in the Northern Hemisphere, but he eventually proved himself a champion there too, topping the General Sires’ Table of Great Britain and Ireland in four of the five years from 2003 to ’07 inclusive. Two of the horses who got him off the ground there were Danehill Dancer (Ire) and Danetime (Ire), both trained for Michael Tabor in Newmarket by his old friend Neville Callaghan. They were sprinters of roughly similar ability, notwithstanding that Danehill Dancer was significantly more precocious and won two Group 1 races as a 2-year-old, while Danetime did not hit form until he was a 3-year-old and never won in black-type company. Both retired to stud relatively unheralded, Danehill Dancer on the lower rungs of the Coolmore ladder and Danetime at Tally-Ho Stud.

Both horses excelled at stud, most notably with Danehill Dancer completing his ascent by topping the General Sires’ Table of Great Britain and Ireland in 2009. Danetime too climbed his way up the rankings, but sadly died in 2006 at the age of 12. His true merit was only becoming clear at the time.

Among Danetime’s best offspring were two G1 Prix Morny winners Myboycharlie (Ire) and Bushranger (Ire), who both won that prestigious 2-year-old sprint after their father’s death, in 2007 and ’08 respectively. Both have enjoyed a good year as stallions in 2016, and Jameka’s Caulfield Cup victory has been another reminder that Myboycharlie could be the son of Danetime to reach the greater heights which death prevented his father from scaling.

Like his grandsire Danehill before him, Myboycharlie is defying the fact that he himself was only a sprinter by siring good horses across the distance spectrum. Jameka is a black-type winner from 1400m to 2500m and must surely have a fair chance in the G1 Emirates Melbourne Cup over 3200m. This is easy enough to understand as, although hers is basically a short-distance family, there are some high-class staying stallions in her pedigree. Her second, third and fourth dams were daughters of G1 VRC Derby winner Grosvenor (NZ) (Sir Tristram), Derby winner The Minstrel (Northern Dancer) and Luthier (Fr) (Klairon {Fr}), winner of the Prix Lupin and sire of seven Group 1 winners at 2400m or farther including G1 Prix de l’Arc de Triomphe hero Sagace (Fr).

Studs That Keep on Giving…

We see it time and again that good studs keep churning out good horses. Having bred the world champion sprinter Black Caviar (Aus) (Bel Esprit {Aus}) and her top-class half-brother All Too Hard (Aus) (Casino Prince {Aus}) as well as several other high-class horses from the family, Rick Jamieson’s Gilgai Farm near Nagambie in Victoria would have an indelible place in the annals even if it never produced another winner. However, it keeps hitting the headlines, with Jameka’s Caulfield Cup victory merely the latest landmark triumph for this over-performing nursery.

Gilgai Stud offered Jameka as a yearling at Inglis’ Melbourne Premier Yearling Sale in March 2014, where she was bought by her trainer Ciaron Maher for A$130,000. Her dam Mine Game (Aus) (General Nediym {Aus}) in retrospect, can be seen has having been very well bought by Dermot Farrington when fetching $190,000 at the Magic Millions Conrad Jupiter Yearling Sale at the Gold Coast in January 2007. Mine Game was a good winner in Melbourne, coincidentally landing the opening race on Caulfield Cup Day in 2008 and is now shaping up as an excellent broodmare. Jameka is only her second foal. The third, Nikitas (Aus) (Snitzel {Aus}), who fetched $280,000 as a yearling, was twiced group-placed in Queensland as a 2-year-old last season.

Jamieson’s policy on stallion selection for his hand-picked broodmare band is worth considering, “I really don’t take into account how commercial a stallion is. I’m happy to utilise the services of any stallion, but every horse I breed always starts with the mare…It really does boil down to how much the stallion itself is going to suit my mare and is not confined to how the resultant foal will sell in the ring.”

Ever since the Breeders’ Cup was inaugurated in 1984, winning a race at the great meeting has conferred a particular honour on a horse. This distinction has been a passport to stud for many stallions over the years, as results from the three days of the Melbourne Racing Club Carnival at Caulfield have reminded us.

Artie Schiller (El Prado {Ire}) was one of the stars of the Breeders’ Cup at Belmont in 2005, taking the G1 Breeders’ Cup Mile. He has subsequently been carving out a good dual-hemisphere career, most recently splitting his time between WinStar in Kentucky and Emirates Park in New South Wales. Two of his 3-year-olds played starring roles at Caulfield: Flying Artie (Aus) landed the G3 Blue Sapphire S. over 1200m on the second day of the Carnival and Good Standing (Aus) took the G3 Norman Robinson S. over 2000m on Caulfield Cup Day, a race which is often a very good trial for the G1 Victoria Derby two weeks later.

While the economics of the modern stallion industry mean that nowadays many of Australia’s best horses do not have a chance to prove their durability, the Australian Thoroughbred has always been admired for his toughness. This still applies today, and few horses better conform to the ‘Aussie battler’ stereotype than the admirable 8-year-old sprinter Our Boy Malachi (Aus) (Top Echelon {Aus}), who took his record to 19 wins from 26 starts by taking the G2 Dilmah Caulfield Sprint over 1000m on Caulfield Cup Day with a brilliant last-to-first burst.

Affectionately known as ‘The Rockhampton Rocket’, Our Boy Malachi spent most of the first part of his career trained at Rockhampton in north Queensland by John O’Sing, under whose care he won 12 times from only 13 starts. When it was clear that Our Boy Malachi was so good that he ought to be racing in the cities down south, his owners, the Donovan family, sent him south to join the training team of John Hawkes and his sons Michael and Wayne. Now aged eight, the tough chestnut gelding seems as good as ever, and has now won at Group 2 level in both Melbourne and Sydney, with earnings closing in on the million-dollar mark.