First Winner For Ulysses At Killarney 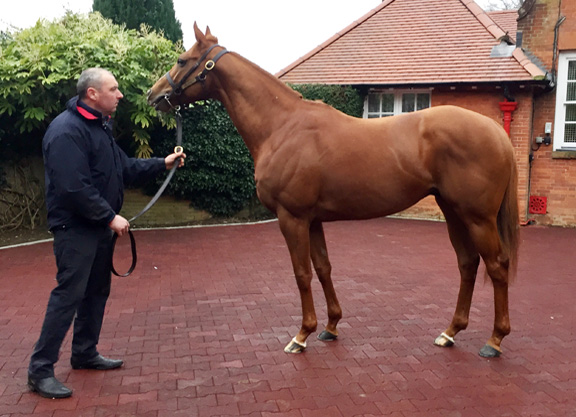 Cheveley Park Stud's Ulysses (Ire) (by Galileo {Ire}) was the latest first-season sire to be represented by a first winner on Monday as Flaxman Stables Ireland's Piz Badile (Ire) took Killarney's opening Irish Stallion Farms EBF Maiden over a mile. The first foal out of the Listed Prix Zarkava winner and G2 Prix Corrida runner-up That Which Is Not (Elusive Quality), the Donnacha O'Brien-trained colt tracked the early pace in second and travelled easily to the fore passing three out along with The Aga Khan's Karakoul (Ire) (Fast Company {Ire}). Headed by that rival two out, the 3-1 second favourite regained the advantage close home to prevail by a neck under Gavin Ryan. “We always thought he was one of our best ones, he's a beautiful big horse and did well to win as he was green and raw and was against a few rivals with experience,” the winning trainer said. “Hopefully he is a smart horse for the future. He is massive and wouldn't have run this year, only he was working that well. Whatever he does this year is going to be a bonus and will be a real horse next year. It's an all-10-furlong type of pedigree–Ulysses won the Juddmonte and the mare was ten furlongs. That's what he'll probably end up getting. He is the only Ulysses horse I have and I think he is smart anyway.” Remarkably, That Which Is Not who also has a yearling colt by Shamardal and a 2021 filly by Kingman (GB), was the only black-type performer out of the operation's high-class mare Shiva (Jpn) (Hector Protector), who took the G1 Tattersalls Gold Cup, G3 Brigadier Gerard S. and G3 Earl of Sefton S. and was placed in the G1 Champion S. and G1 Eclipse S. Shiva is also the second dam of Threat (Ire) (Footstepsinthesand {GB}), who captured the G2 Gimcrack S. and G2 Champagne S., the G3 Derrinstown Stud 1000 Guineas Trial runner-up Radiantly (GB) (Aussie Rules) and the G2 Coventry S. third Eltezam (Ire) (Kodiac {GB}). Her half-sister Light Shift (Kingmambo), who was the heroine of the G1 Epsom Oaks, is the dam of Ulysses himself whose winning exploits included the G1 Juddmonte International and G1 Eclipse.