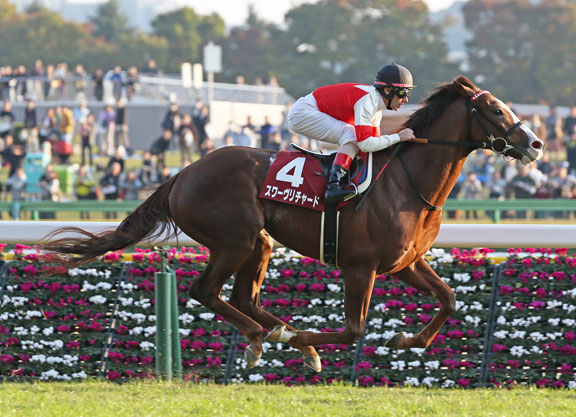 Suave Richard (Jpn) (Heart's Cry {Jpn}) was a key player in last year's Japanese Classics, but came through with his first Group 1 win in Sunday's G1 Osaka Hai. Suave Richard raced off the fence with just one in the field of 16 behind rounding the bend for the first time, while the year-old dual Group 1 winner Satono Diamond (Jpn) (Deep Impact {Jpn}) sat four lengths off the lead on the rail and last year's G1 Japan Cup winner Cheval Grand (Jpn) (Heart's Cry {Jpn}) traveled midpack. Suddenly commencing a bold move midway down the backstretch, Suave Richard circled the entire field in just under three furlongs and was a little under a length the best turning for home. The white-faced bay held his advantage under mostly hand riding from Mirco Demuro and found the wire three-quarters of a length the better of a fast-finishing Persian Knight (Jpn) (Harbinger {GB}), the winner of last year's G1 Mile Championship, with last year's G1 Satsuki Sho (Japanese 2000 Guineas) winner Al Ain (Jpn) (Deep Impact {Jpn}) sticking on for third after following Suave Richard into the stretch.

“Since the pace was very slow, I decided to make an early bid,” said Demuro. “He responded so well, I had absolutely no doubts in him and he stretched beautifully. He didn't change legs in the [right-handed] Arima Kinen, but today he did which is a promising factor–something to look forward to from now on.”

Suave Richard was sixth, beaten three lengths, behind Al Ain in the Satsuki Sho last year before running Rey de Oro (Jpn) (King Kamehameha {Jpn}) to three-quarters of a length when second in the G1 Tokyo Yushun (Japanese Derby). He won the G2 Copa Republica Argentina over 2500 metres before finishing 1 3/4 lengths adrift of Kitasan Black (Jpn) (Black Tide {Jpn}) in fourth in the G1 Arima Kinen on Dec. 24. He is now two-for-two this year, having taken the G2 Kinko Sho on Mar. 11.

Suave Richard's second dam is the GII Sorrento S. winner Career Collection (General Meeting). His dam Pirramimma (Unbridled's Song), sent to Japan as a yearling, was unsuccessful on the track herself but has produced the Group 3-placed Bandwagon (Jpn) (White Muzzle {GB}) in addition to Suave Richard. Pirramimma's most recently recorded produce is a 2-year-old colt by Orfevre (Jpn).