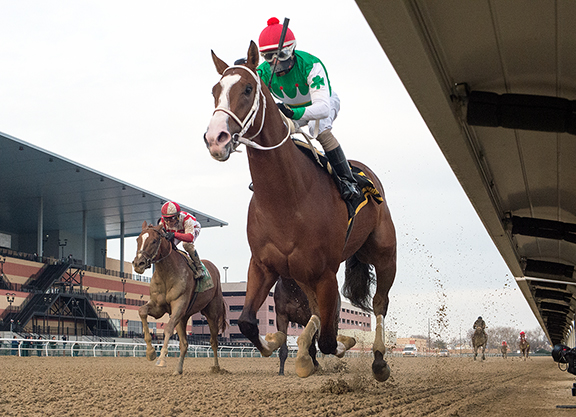 Maximus Mischief (Into Mischief–Reina Maria, by Songandaprayer), one of three sons of 2020's leading sire on the Spendthrift Farm roster, was represented by his first foal when a colt was born early Saturday, Jan. 9. The bay colt is a Florida-bred out of Rosetta's Gift (Two Step Salsa) and is also the first foal for the mare.

“This colt is very nice with a lot of size for a first foal,” said Angela Ingenito, who bred both the foal and his dam. “The mare is a maiden and rather plain, but the foal looks like [Maximus Mischief] who has certainly moved up the mare. I'm very excited. I see a lot of Into Mischief. He has a nice hip, a lot of bone, a good front end, and good head and neck. It's a nice representation of the sire.”

Maximus Mischief was undefeated in three starts at two, culminating in a front-running score in the GII Remsen S. After one start at three–a third-place finish in the GII Fasig-Tipton Holy Bull S.–he was retired due to a soft tissue injury and entered stud at Spendthrift last year. He covered 196 mares in his first book and will stand for $7,500 this year.