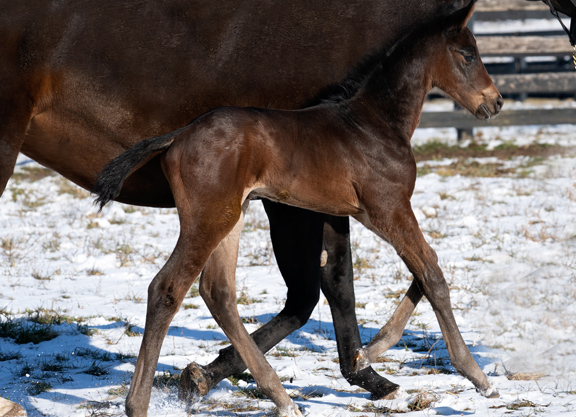 The first foal by group-placed Lost Treasure (Ire) (War Front) is a colt out of Little Miss S (Candy Ride {Arg}). The mare is a half-sister to Grade I winner Crisp (El Corredor).

“How fitting that the first foal by this regally bred group-placed son of War Front from the immediate family of Galileo (Ire), would be out of a half-sister to Grade I winner Crisp,” said John G. Sikura, President of Hill 'n' Dale Farms, which stands the 6-year-old stallion. “That's what happens when you have great partners like Glen Hill Farm who sent the mare to Lost Treasure.”

Tracey Caudill of Watershed Equine, which bred the foal, reported, “Little Miss S had a magnificent Lost Treasure colt this morning. If they all are like him, you guys have a goldmine of a stud. The only foal I've had to compare to this Lost Treasure colt is the Army Mule I foaled last year for Hugh Moore out of the mare Deceive.”

“I am a big believer in this stallion's chances,” Sikura said. “I couldn't ask for a better start to this promising young stallion's career.”