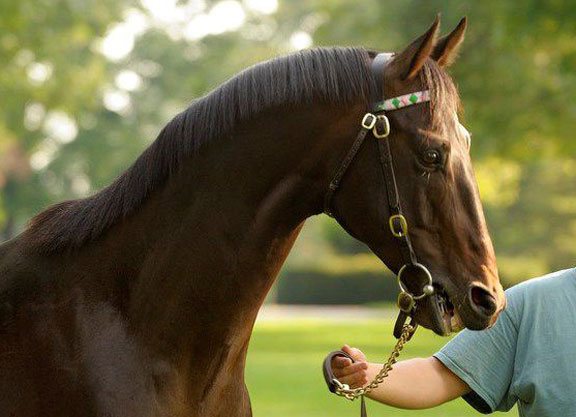 There was very little on form between the main protagonists for Saturday's G2 Summer Mile at Ascot, but one who did have some play in his profile was Tilsit (First Defence) and the Juddmonte homebred duly made that class edge tell to prevail for a career-best success. Last seen finishing a head second to Skalleti (Fr) (Kendargent {Fr}) in the G1 Prix d'Ispahan over an extra furlong and 55 yards at ParisLongchamp May 30, the 4-1 favourite followed Century Dream (Ire) (Cape Cross {Ire}) wide of the other runners throughout the early stages and stuck close as that stalwart kicked for home at the top of the straight. Taking until the furlong pole to master his veteran rival, the homebred who had won last year's G3 Thoroughbred S. at this trip was driven out by Kieran Shoemark to score by a 3/4 of a length, with Al Suhail (GB) (Dubawi {Ire}) a length behind in third. “I felt we won quite cosily and he possibly wasn't doing a whole lot in front, but that's just him–he doesn't show much at home,” the jockey said. “Even cantering to the start, he was looking at everything. He's still relatively unexposed, so I think he can continue to progress.”

Despite the substandard nature of the opposition, very few horses can win a novice race by 19 lengths as Tilsit did on Newcastle's Tapeta last June and his next start saw him beat My Oberon (Ire) (Dubawi {Ire}) in Goodwood's Thoroughbred S. at the end of July. Fourth on his 3-year-old finale in the G2 Joel S. at Newmarket in September, the homebred was sent to Riyadh for the Feb. 20 Neom Turf Cup but could manage only fifth in that 10 1/2-furlong contest prior to his European comeback when again in front of My Oberon but behind Skalleti in the Prix d'Ispahan. This puts the winner in the mix for the July 28 G1 Sussex S. and Shoemark thinks the race could suit. “When they set off into group 1 company again, I think the tempo of races are just run that little bit quicker and you can ride a little bit more efficient race,” he said. “He's won at Goodwood before last year and I do think he's better on quick ground too. He's an exciting prospect.” Charlie Hills's assistant Jamie Insole told the Racing Post, “You'd have to face Palace Pier, but every horse is beatable and Tilsit won at Glorious Goodwood last year, so likes the track.”