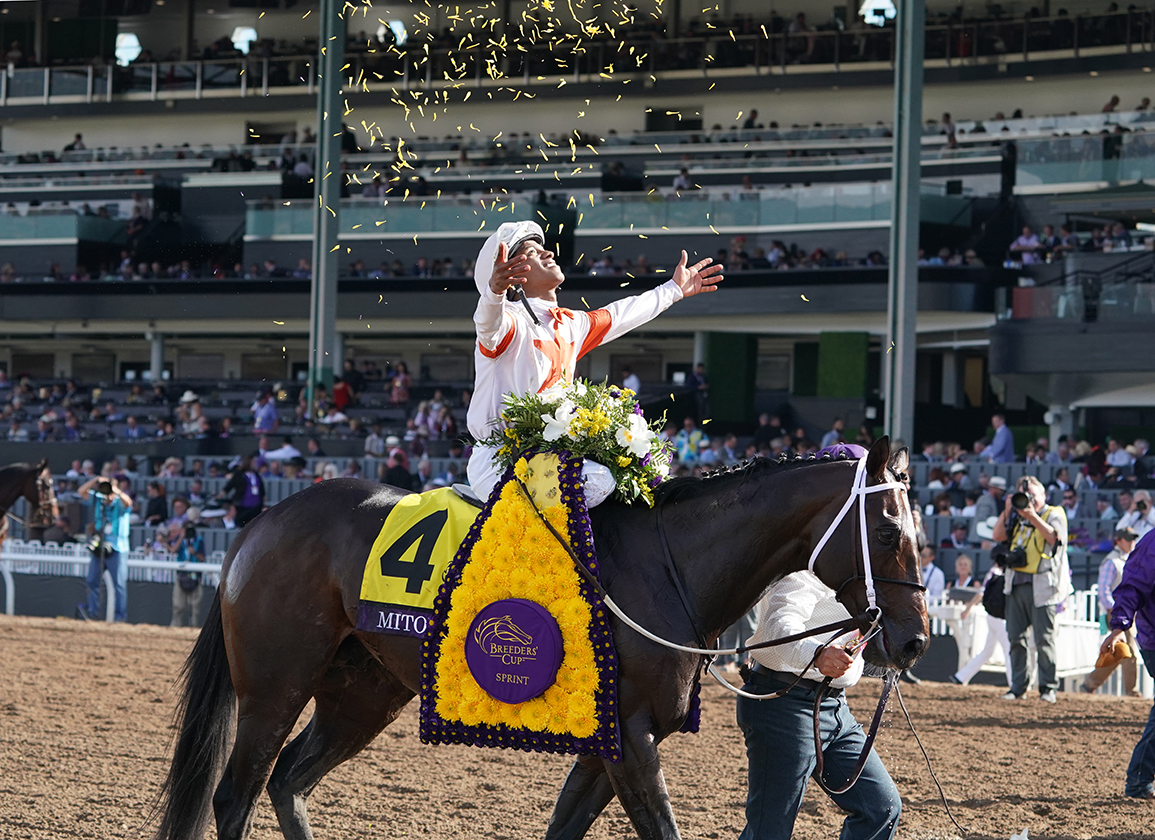 The 2022 class of first-crop yearling sires features a diverse batch of Kentucky-based young stallions including a pair of Breeders' Cup champions, two sons of reigning top sire Into Mischief, five graded stakes winners at two and five Grade I winners on turf. Throughout the course of the yearling sales season, we will feature a series of freshman sires as their first crop points toward the sales ring.

Mitole (Eskendereya – Indian Miss, by Indian Charlie) is a barn favorite for Spendthrift Farm's Stallion Sales Manager Mark Toothaker for several reasons, perhaps a big one being that, as Toothaker joked, “He's easy on a guy trying to sell stallion season.”

The 2019 GI Breeders' Cup Sprint champion bred over 200 mares in each of his first few years at stud, including that tough third season where many promising stallions are lucky to get 100. What has made Mitole so extremely popular?

“I think with Mitole, the biggest thing with him was just how fast he was,” Toothaker explained. “Steve [Asmussen] even said that this is the fastest horse in the world. He was hard to beat at any distance and we feel like that's what breeders have gravitated toward is his speed. The demand for him has just been amazing through the first three years.”

Bred by Edward A. Cox Jr., Mitole was a $20,000 yearling turned $140,000 OBS April 2-year-old. Campaigned by William and Corinne Heiligbrodt and trained by Steve Asmussen, the colt out of future Broodmare of the Year Indian Miss (Indian Charlie) got his first win in his third start, defeating a field of maidens by 10 lengths as a young 3-year-old. He got his first stakes win two months later in the Bachelor S. at Oaklawn Park.

“We were chasing another stallion that day,” Toothaker recalled. “When I came back to the office, I told everyone that I may have seen the best 3-year-old in the country. They thought I was talking about the other horse, but I was talking about Mitole. This was April of his 3-year-old year and he got a 107 Beyer. This horse was just incredible.”

Mitole was sidelined after a win in his next start in the Chick Lang S. due to a splint injury, but returned at four to capture six of his seven starts in 2019, including the GI Churchill Downs S. on the Kentucky Derby undercard, the GI Runhappy Metropolitan H. over MGISW McKinzie (Street Sense) and the GI Forego S. in stakes-record time. He culminated his season with a career-high 112 Beyer Speed Figure in the GI Breeders' Cup Sprint and retired with over $3 million in earnings as the 2019 Champion Male Sprinter and Horse of the Year finalist.

Launched with an initial stud fee of $25,000 in 2020, Mitole's fee was brought down to $15,000 the next year when Spendthrift reduced stud fees for most of their roster in 2021. Toothaker said that as the young stallion's first foals arrived, breeders started calling with the hopes of bringing their mares back to him.

“People have loved the way these things look,” Toothaker said of Mitole's first foals. “They have great hips on them, they look like him, and they just look fast.”

Mitole sent 56 weanlings and short yearlings through the ring at the breeding stock sales. 46 sold to average $80,608 and place their sire among the top 5 first-crop weanling sires in North America in 2021. His colt out of Rode Warrior (Quality Road) sold for $285,000 at Keeneland November to Spendthrift Farm and Bill and Corinne Heiligbrodt while another colt at the same sale brought $200,000.

At the upcoming Fasig-Tipton July Sale on July 12, Mitole will be represented by 13 members of his first crop.

“I feel like as we go around and do our notes out there, it's going to be a lot of the same,” Toothaker said. “It will be a horse that looks like we could take to the 2-year-old sale and it could go fast and have a chance to hit a big lick, or, it could be a horse that trainers are going to take to the track saying that we could come out with this 2-year-old and mean business from the get go.”

Brookdale Sales will send Hip 9, a Mitole colt out of the Lonhro (Aus) mare Limit, through the sales ring at Fasig-Tipton July for breeder Mineloa Farm. Martin O'Dowd said that everyone at Mineola has been impressed by this colt from the start.

“He's very, very nice,” O'Dowd said. “He's correct and has a great mind and a lovely walk. In the paddock, he just moves beautifully with a fabulous, low stride. The mare has a very deep family and it's a family that runs on dirt and turf.”

At the same sale, Rosilyn Polan's Sunday Morning Farm will send a Mitole colt through the ring as Hip 51. The yearling is out of Sweetness Galore (Rock Hard Ten), a daughter of GISW Tribulation (Danzig). Polan's favorite thing about the youngster, she said, is his powerful stride.

“I love that he is not only so fluid when he walks, but he's so purposeful,” she explained. “He acts like he's planning ahead with every footfall and just reaching for the finish line. He's a fun one to have.”

Toothaker said that he is anticipating high demand for Mitole's yearlings from a wide variety of shoppers.

“It's exciting because Bill and Corinne were active at the sales supporting him and they're going to try to have these things ready to roll as well,” he said. “I feel that the 2-year-old pinhookers all the way to the people going to the races are going to want to have a Mitole. Everybody likes fast.”