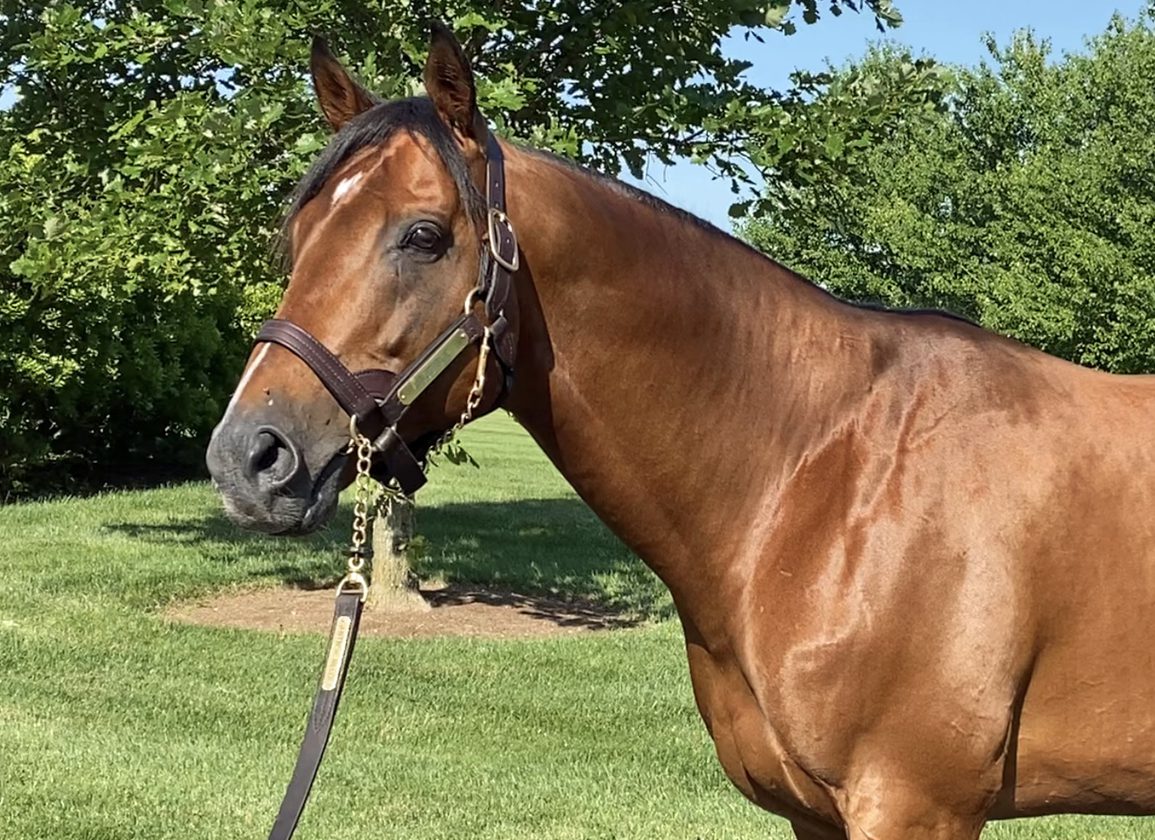 Audible has seven yearlings heading for the Fasig-Tipton Saratoga Sale

The 2022 class of first-crop yearling sires features a diverse batch of Kentucky-based young stallions including a pair of Breeders' Cup champions, two sons of reigning top sire Into Mischief, five graded stakes winners at two and five Grade I winners on turf. Throughout the course of the yearling sales season, we will feature a series of freshman sires as their first crop points toward the sales ring. Check out the first few editions of our series here.

WinStar Farm's Liam O'Rourke vividly recalls the day that breeders got their first look at Audible (Into Mischief – Blue Devil Bel, by Gilded Time) just after the new stallion moved into the stud barn.

“We had a little party here to welcome him to the WinStar stallion barn and when we brought him out in front of breeders, there was an immediate draw to him,” O'Rourke explained. “He's just such a eyeful and is among the very best of the physicals by Into Mischief. From that point, people started shouting for seasons.”

Demand to breed to the 2018 GI Florida Derby winner was so high that Audible was the most popular first-year stallion in WinStar's history, breeding just over 220 mares in his debut season with a $25,000 stud fee.

“Demand for him has been extremely strong through all three years he's been here,” O'Rourke reported. “Right from the get go, there was a buzz around town on Audible.”

A $175,000 New York-bred yearling pinhook and a $500,000 2-year-old purchase for WinStar Farm and China Horse Club, Audible broke his maiden as a juvenile for Todd Pletcher and returned at three to take the GII Holy Bull S. by over five lengths and the GI Florida Derby by three. He ran third to Justify in the GI Kentucky Derby and later added another victory in the Cherokee Run S. Audible retired at four with over $2 million in career earnings.

“They're a very consistent group,” he noted. “He throws great substance, plenty of length, great quality and good bone. They're a robust, muscular type but with lots of length and they look like they can stretch out. The feedback from breeders was very positive from the start and we realized pretty early on that he was going to have a big November.”

With his first yearlings at the Fasig-Tipton July Sale, Audible's progeny continued to trend upward. Seven of his nine lots sold for six figures, led by a colt out of I'm Guilty (Verrazano) that brought $220,00 to Bradley Thoroughbreds and a second colt out of Wonder Stone (Super Saver) that sold to Gus King for $200,000.

“Some of the best judges were on the Audibles in July, including Donato Lanni, Peter Bradley, Travis Durr and Nick de Meric,” O'Rourke said. “He has seven entered at the Fasig-Tipton Saratoga Sale, which is more than any other freshman sire, so we think that's a great sign.” 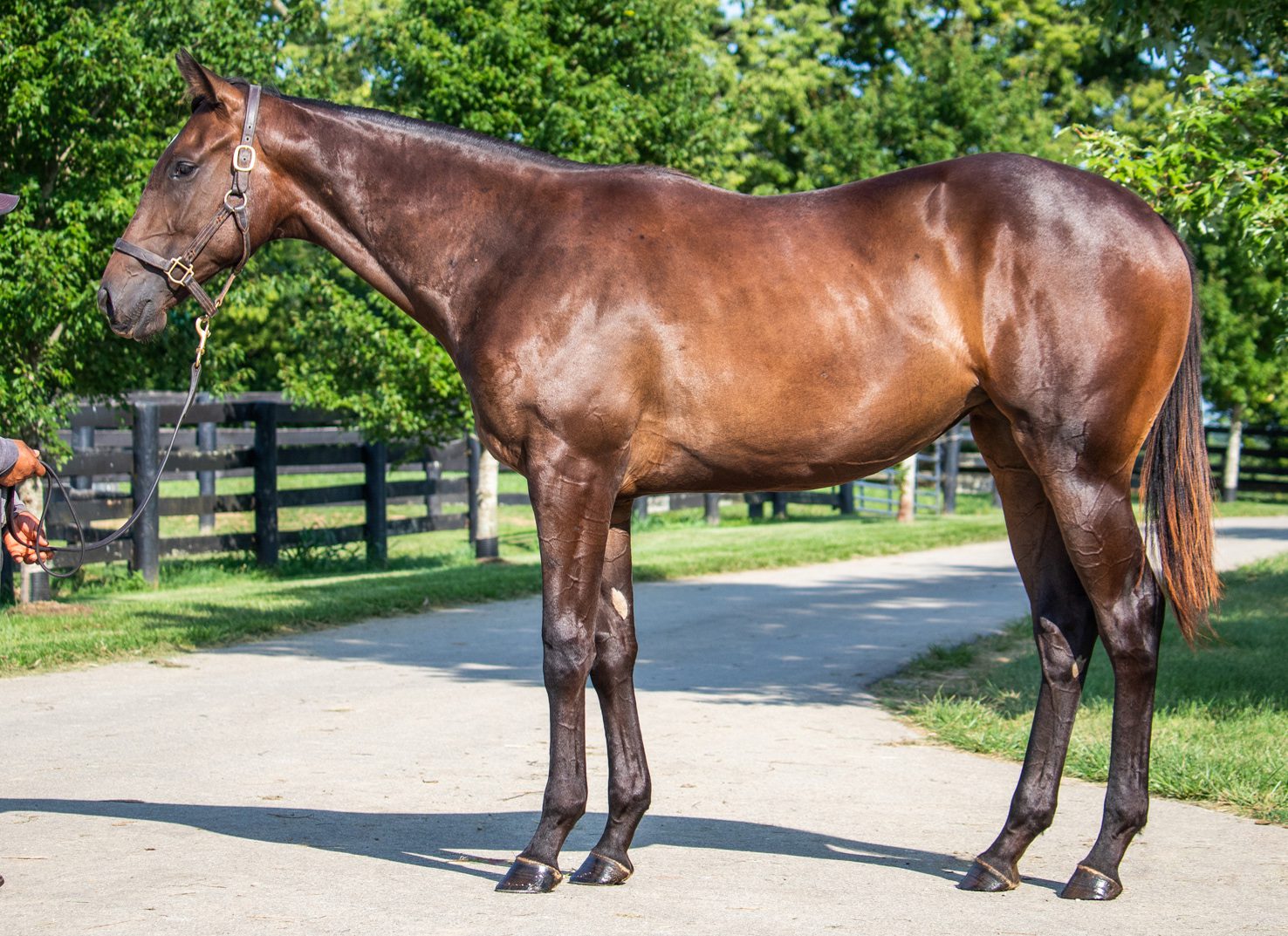 One filly bound for Saratoga will represent the Machmer Hall consignment as Hip 43. The yearling out of Patsy's Kim (Dixie Union) was bred by Teresa Little and was a private purchase for Machmer Hall Sales. Carrie Brogden said that the youngster is the type of yearling that their consignment hopes to offer in Saratoga.

“She's big and fancy and two-turn, but looks like she'll have speed,” Brogden said. “She vets, she's correct and she's got a classy brain. Our farm has a share in Audible. I was a big fan of him as a racehorse and obviously WinStar has an incredible track record making stallions. We had two Audibles in July and they were more of a pinhooker-style horse. Both of them looked very speedy. This [Saratoga-bound] filly has a lot more scope and stretch.”

Of the Audibles that have been on her farm, Brogden said that all have shared one trait that she has also noticed in Into Mischief's progeny and the offspring of other sons of the champion sire.

“They all have the Into Mischief brain,” she said. “When you're pushing the feed cart, they're always whinnying and beating down the door for feed. For me that's a wonderful sign of a racehorse because it means they're not going to back out of their feed tub. It's a common theme that I see again and again.”

Another yearling slated for the sales ring in Saratoga is a colt out of Peter Blum's homebred Tapit mare Sundown. The gray will sell as Hip 97 with Bridie Harrison.

“We like this colt a lot,” Harrison reported. “He's tall with a lot of leg and great length. Audible added a lot of size and scope to Sundown. This is certainly one of her bigger foals. He's a very nice mover and has a great temperament.”

After the Select Sale in Saratoga, nine Audible yearlings will go through the ring at the Fasig-Tipton New York-Bred Sale.

As Audible's progeny soon begin making their way to the racetrack, O'Rourke said to look for them to come out in force early next year.

“He was a precocious horse,” he noted. “He breezed fast and then went out and performed as a 2-year-old on the racetrack. His sire line has precocity so I do think there's going to be precocity there, but with the way he's built, I think they are built to carry that speed a route of ground. They'll be able to go around two turns with their length, but do so in a front-running fashion.”