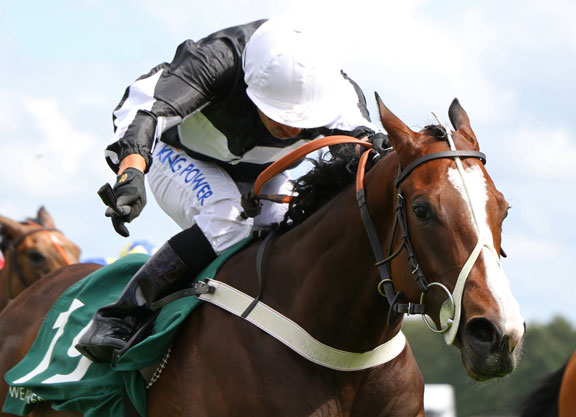 ASCOT, UK–Which would you rather have: the colt who topped the opening session at Keeneland the previous day, or all 127 animals who found a new home at Ascot yesterday? You could have corralled the whole herd of them for less. But the beauty with Thoroughbreds, of course, is that each and every individual that changed hands at the Tattersalls Ascot Yearling Sale–for an aggregate £1,356,850, up 24% in only the third year of the auction–retains the right to prove their relative valuation all wrong, once broken and sent in training.

After all, that’s exactly what happened with several graduates of last year’s sale. Besides the four fillies who have won listed races, they also included a £28,000 colt beaten just a neck in the G2 Norfolk S. over the road at the Royal meeting; and, one of the fairytales of the season, the £3,000 filly Bettys Hope (GB) (Anjaal {GB}), who completed a hat-trick for Rod Millman when scooping a £122,925 pot in the Weatherbys Super Sprint at Newbury in July.

Certainly the sale seems to be finding an auspicious niche, pitching to trainers or pinhookers with a regard for the up-and-at-’em youngster. There was a nice buzz to the sales grounds through the day, a solid clearance rate (79%, from 73% last year), and the level of business–albeit obviously from a low base-advanced steeply, given that this is often said to be a very porous sector of the market.

Head of Ascot Sale Matthew Prior commented, “The Ascot Yearling Sale has enjoyed a hugely successful year on the track. We were cautiously optimistic coming into today’s sale, having produced an improved catalogue, and an increased buying bench has led to strong demand for those popular lots. As ever we must thank both vendors and purchasers alike for their growing support of this upwardly mobile sale, which has firmly established its position in the calendar.

Nobody is more convinced of the sale’s virtues than Tom Palin of Middleham Park Racing, who found the Norfolk runner-up here last year (with Federico Barberini). Ventura Rebel (GB) (Pastoral Pursuits {GB}), sent to Richard Fahey, won his first two starts for Middleham Park before running at Ascot in the silks of Abdullah Menahi. That was obviously a rewarding experience all round, and Fahey will now be asked to repeat the trick after the sale’s first £50,000 transaction.

To be fair, even at that price lot 72 represented value simply as a daughter of Whitsbury Manor’s £55,000 flagship cover Showcasing (GB). Consigned by her sire’s home farm, this filly brought a pedigree that underpinned the speed you’d associated both with Whitsbury and this auction–her first three dams are by Sakhee’s Secret (GB), Efisio (GB) and Thatching (Ire)–with a degree of quality, being out of a half-sister to Group 2 winner Temple Meads (GB) (Avonbridge {GB}) who has produced Moraawed (GB) (Swiss Spirirt {GB}) to reach a rating of 91 this summer.

“This sale has been very kind to us,” confirmed Palin as agent Mouse O’Ryan signed the docket. “We had Ventura Rebel last year but also [Dante meeting scorer] Wedding Date (GB) (Dandy Man {Ire}) at the first one. It’s definitely a sale on the up, it’s one we’ve been targeting, and we’ve been to see the vast majority of the horses here. And for me this filly was a particular standout.

“She has a great step on her, a great walk, and good size and scope. Obviously Showcasing needs no introduction, and there’s plenty of black-type on the page. Hopefully she can be not too far off the half-brother that Shadwell have.”

Palin suggested that this auction was profitably slipstreaming the progressive profile of the Goffs UK Premier Yearling Sale at Doncaster. “We came away from Donny with nine, which was not quite as many as we had hoped,” he said. “I think we got 11 there last year, and 15 the year before. Their pedigrees have been getting stronger so for middle-market buyers (at best) like us, it’s been getting harder and harder there. But these athletic horses have got to go somewhere, and it’s looking like it could be here.”

Ross Doyle is another who said he likes the way the sale is developing and–thanks to the unfortunate withdrawal of lot 34, a half-sister to one of last year’s star graduates in Listed National S. winner Flippa The Strippa (Ire) (Outstrip {GB})–he can be credited with its most purposeful five minutes yet after giving a total £77,000 on consecutive animals into the ring.

Lot 33, a brisk-stepping filly by Starspangledbanner (Aus) presented by Jamie Railton, made £40,000; while lot 35, a colt by the flourishing Footstepsinthesand (GB) consigned by Hegarty Bloodstock, required £37,000. This latter has a second dam to conjure with, as a Nijinsky half-sister to that wonderful filly Diminuendo.

“And a good physical, very well prepped,” noted Doyle. “We’ve been lucky with the sire, too, with Larchmont Lad (Ire) and now Mums Tipple (Ire). The filly is another very good physical, a good mover, and is obviously by a very good sire of fillies.”

Another hoping to build on past success was Henry Candy, albeit in his case the trusted template was a mare. For lot 148, a filly by Mehmas (Ire), is out of Symbol Of Peace (Ire) (Desert Sun {GB})–whose son Treaty Of Paris (Ire) (Haatef) won the G3 Acomb S. for Kingston Warren in 2013, before his sale to Hong Kong.

Treaty Of Paris raced for Alex Frost–driving force behind the Alizeti Group’s bid for the Tote–and he was at Candy’s side as the gavel came down at £45,000 for a filly astutely pinhooked by Clonmult Farm, whose Vikki Hancock picked up this elegant filly for just €8,000 as a foal at Goffs last November. That was good work, granted a page full of achievers: the dam’s half-sister won no fewer than 25 races while the third dam, G3 winner Sing Softly (GB) (Luthier {Fr}), was very fertile in both winners (including the celebrated Chester Cup winner Top Cees (GB) (Shirley Heights {GB}) and producers.

Candy has repeatedly excelled with horses dredged from the lower market, not least with Treaty Of Paris who cost just £16,000 at the Doncaster breeze-ups. “The page is just winners, winners, winners,” he reasoned. “Like Treaty Of Paris she’s a great walker, and she’s just a racy filly–maybe a fraction weak behind, but I think she’ll strengthen up when she goes off to Alex’s stud now.”

Most transactions, obviously, remained at a functional, sleeves-rolled-up level. But there was some reflected glamour to lot 28, a Cable Bay (Ire) filly co-bred by that shining star of ITV Racing, Francesca Cumani.

The first foal of an unraced mare by broodmare sire legend Pivotal (GB), she was knocked down to trainer Michael Bell for £32,000, the docket being signed by Jackson-Stops Bloodstock. Alison Jackson, Cumani’s collaborator in the project, was on hand to declare that she was retaining a stake in the filly.

Bell will do his best to oblige. “She’s a very nice filly and I’m a fan of the sire,” he said. “In fact I’ve got two Cable Bays and they’ve both won.”