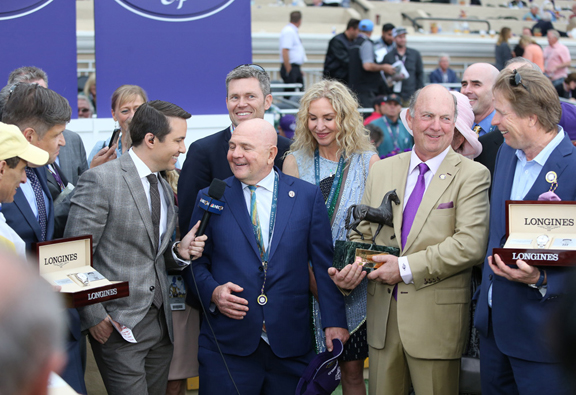 Chuck Fipke likes to challenge himself. That's why he became a geologist. That's why he sold his stake in Canada's Ekati Diamond Mine, the discovery that made him wealthy, to be able to further explore the rest of the planet. It's also the reason he's coming off of two enormous Grade I victories in three weeks and is, naturally, pointing both winners toward the world's richest horse race.

At the 2007 Keeneland November sale, Fipke made a big splash when he went to $2.5 million to secure the previous year's GI Kentucky Oaks heroine, Lemons Forever (Lemon Drop Kid). That's where he met Dallas Stewart, who campaigned and co-owned the filly with Willis Horton.

“I went over to congratulate him because that's what you do and we had a small talk,” Stewart recalled. “He said, 'Hey, I'm going to send you some horses one day. I've been watching you.' I said, 'Man, that would be great.' He sent me some horses, we had a couple of winners right off the bat, Lemons Forever had one baby who was OK, then Unbridled Forever came down the pike and she was a superstar. Then Forever Unbridled came.”

A daughter of Unbridled's Song, Unbridled Forever placed in five graded stakes as a 3-year-old before busting out in the GI Ballerina S. the following summer. But it's her one-year-younger full-sister who has taken Fipke and Stewart into a new echelon.

Like her kin, Forever Unbridled progressed markedly from three to four, going from a Grade III winner as a sophomore to a multiple Grade I victress the next season, capturing the GI Apple Blossom H. and GI Beldame S. in 2016. But even that was just an appetizer for her 5-year-old success. After running down the brilliant Songbird (Medaglia d'Oro) in the GI Personal Ensign S. at Saratoga, the bay gave Fipke and Stewart one of the biggest thrills of their lives by triumphing in the GI Longines Breeders' Cup Distaff Nov. 3 at Del Mar.

“Forever Unbridled is a pretty awesome horse,” Fipke said. “She's a long-legged, beautiful animal. Her conformation is unreal. She's got the physical down. And if you notice in her last four races, she's never been whipped. We don't whip her, she goes by encouragement, and we feel that if she was whipped, she wouldn't win. It's in her heart. You don't have to whip somebody who has a great heart.”

A year before Fipke went to the mat for Lemons Forever at KEENOV, he had turned heads with his purchase of Title Seeker (Monarchos), an unraced daughter of undefeated Hall of Famer Personal Ensign (Private Account), for $1.7 million. The filly was pregnant with a foal by Seeking the Gold. That foal became Seeking the Title, who captured the GIII Iowa Oaks and was placed in the GI Gazelle S. for Stewart in 2010.

Seeking the Title's first three matings were with Perfect Soul (Ire), who gave Fipke his initial Grade I score in the 2003 GI Shadwell Turf Mile en route to a Sovereign Award for Champion Turf Horse. The second mating produced Seeking the Soul, who RNA'ed for $37,000 as an OBS June 2-year-old in 2015.

Seeking the Soul proved to be a fortunate buyback. Graded stakes placed as a sophomore, he has found a whole new gear as a 4-year-old this fall. Closing into a slow pace to be third in the Lukas Classic Sept. 30 at Churchill, the colt broke the track record for 1 1/16 miles on the Keeneland dirt in a nine-length allowance romp Oct. 21. That effort got Fipke and Stewart planning aggressively.

“He ran so big at Keeneland, I immediately started talking to Mr. Fipke about the Breeders' Cup Classic and told him that we should consider it,” Stewart said. “He listened and we talked about it, but we came to the decision–me, Sid Fernando and Mr. Fipke thought it would be better for the whole family, coming back in two weeks, I might get him out there and wish I wouldn't have brought him out there and then that would mess us up. We didn't really have enough time to figure it out, but I was thinking about it.”

Instead, Stewart stayed home with Seeking the Soul, and the colt rewarded him. Given a near 8-1 chance in the GI Clark H. Nov. 24 at Churchill, he took advantage of a ground-saving ride by John Velazquez and held gamely for a 3/4-length upset.

“He's one of those horses who can really run, has a natural way of going and so you're blessed whenever you get a horse like that,” Fipke said. “It's what everybody is hoping to get. If you go and visit him in the stable and look at him next to all the other horses, he's just different. He's like a loaded gun ready to go off. He's a serious racehorse.”

Fipke announced in the winner's circle of the Distaff that Forever Unbridled would be pointed toward the $16 million GI Pegasus World Cup Invitational Jan. 27 at Gulfstream. Now he has thrown Seeking the Soul's hat in the ring to challenge likely Horse of the Year Gun Runner (Candy Ride {Arg}) as well.

“He could win the Pegasus,” Fipke said. “Gun Runner is the horse to beat, nobody can take anything from him, he's wonderful, but the bull at the top of the mountain, they don't stay there forever.”

Fipke is looking to purchase one $1 million entry for Forever Unbridled and find an investor to buy Seeking the Soul's spot in the gate.

“We have the two that could go in the Pegasus, both might go in, I think we're going to reserve a spot for one of them,” Fipke said. “John Velazquez would like to ride the colt, so we're hoping that will come about.”

In his day-to-day work, Fipke is soaring as well. Closing in on another potentially large diamond mine in northern Canada, he is active in an array of different explorations across the globe.

“We're working in Brazil, Morocco, we explore for everything, diamonds, base metals, gold,” Fipke said. “It's in my blood. I've been trained to find mines and that's what I do.”

As for racing, Fipke is sure to savor his high points in a challenging sport.

“The horse business can be so depressing for months and months,” he said. “For all the horses and races that you lose, there are not too many winners, so it's kind of neat that you keep pressing on and all of a sudden, you get a couple good horses. It's so hard to get a good horse. It's not easy. It requires a great team and you can't have any holes or weaknesses in the chain. You have to cover everything.

“There are many good horses, super horses sometimes, that break down. You can think a horse is going to do so well, everybody loves it, then the horse breaks down or there's a throat issue or something like that and it just destroys everything. It's pretty lucky when you can get a couple of good horses who can break down all the barriers and beat all those odds.”

Luck aside, Fipke has built a foundation for his operation off of just two mares he believed in over a decade ago. And the entire team has enjoyed the fruits of their lineage.

“To be a part of these two families, I've got to thank Lemons Forever and Seeking the Title,” Stewart said. “They got us where we are today. Two of the strongest [families] in the world if you ask me.”