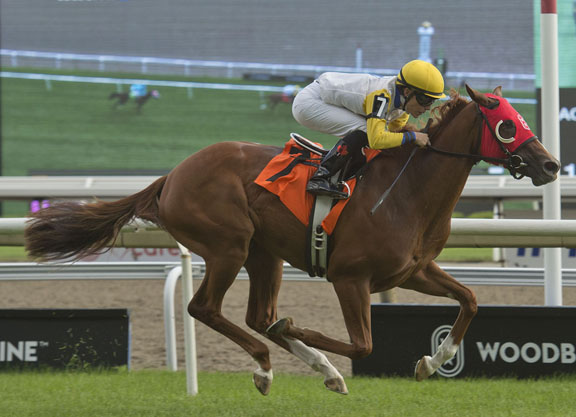 Debutante Lady Speightspeare (Speightstown) followed in the hoofsteps of close relative and stablemate Shirl's Speight (Speighstown) Saturday to garner the 'TDN Rising Star' distinction off of a sharp unveiling over the Woodbine turf. Given a 4-1 chance off a steady, but unassuming series of drills over the Tapeta, the chestnut broke a half-step slowly but was rushed up in between rivals by Emma-Jayne Wilson to take over. She doled out and opening quarter of :22.65 with pressure to her inside, but was asked for a bit more rounding the bend and opened up a couple of lengths on her competition. Challenged by well-bred fellow firster Angelou (Curlin) after posting a :45.88 half, Lady Speightspeare was resilient in the stretch as she swatted away that rival and spurted clear again to don cap and gown by a promising 3 3/4 lengths with a gap of six back to the third finisher.

The winner is out of these connections' Lady Shakespeare (Theatrical {Ire}), winner of the 2010 GII New York S. Lady Shakespeare is out of GISW Lady Shirl (That's a Nice), making her a full to MGISW Shakespeare and a half to GI Breeders' Cup F/M Turf upsetter Perfect Shirl (Perfect Soul {Ire}). Perfect Shirl is responsible for the 3-year-old colt Shirl's Speight, a dazzling eight-length winner over this same course and distance July 4 who doubled up with a clear-cut success in the GIII Marine S. three weeks later. Shirl's Speight is pointing for the GI Kentucky Derby.

Lady Shakespeare produced a colt and filly by More Than Ready in 2019 and 2020, respectively, and was bred back to Fipke's GI Runhappy Metropolitan H. winner Bee Jersey.