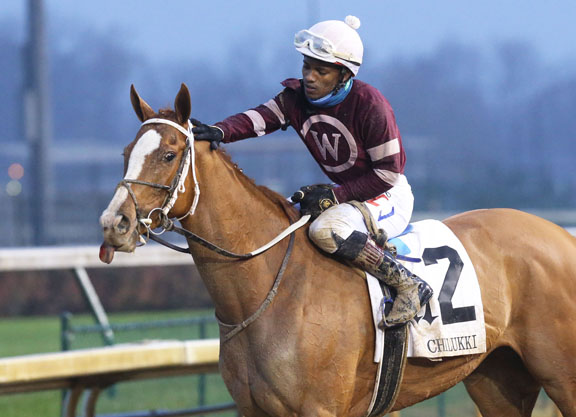 Winchell Thoroughbreds's multiple graded stakes-winning homebred Finite (Munnings) invades from the east to face off against a talented group of sophomore fillies in the seven-furlong GI La Brea S. at Santa Anita Saturday. Trained by Steve Asmussen, the chestnut put together a four-race win streak which included scores in the Rags to Riches S. and GII Golden Rod S. at Churchill late last year and continued at Fair Grounds with victories in the Silverbulletday S. and GII Rachel Alexandra S. She went to the sidelines following a fourth-place effort in the Mar. 21 GII Fair Grounds Oaks and was well-beaten when returning over the Kentucky Downs turf Sept. 15. She got back on track with a narrowly beaten runner-up effort to Venetian Harbor (Munnings) in the Oct. 17 GII Raven Run S. at Keeneland. She is cutting back to seven furlongs for the La Brea following a win in the one-mile GIII Chilukki S. at Churchill Downs Nov. 21.

Grand Farm Family's Himiko (American Pharoah), a $1-million Fasig-Tipton November weanling, jumps up to stakes company and stretches out to a mile following a pair of impressive victories. The Bob Baffert trainee suffered through three troubled trips to begin her career before breaking her maiden going six furlongs at Santa Anita Oct. 18. She romped home by 6 1/2 lengths in a 6 1/2-furlong optional claimer at Del Mar last time out Nov. 8.

Trainer Chad Brown, who swept into Southern California to dominate holiday racing at Del Mar around Thanksgiving, sends out the lightly raced Motivated Seller (Into Mischief) in the La Brea. The Klaravich Stables runner opened her career with a front-running six-length victory at Gulfstream last January. Off nine months after that effort, she returned to add a Belmont Park allowance Oct. 11 and she was closing late when second behind Merneith in the Fort Springs.