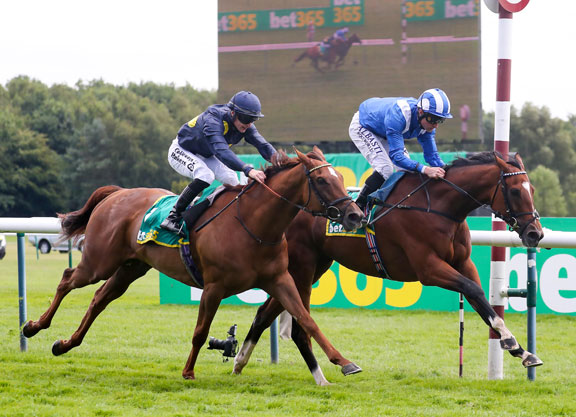 After an opening fixture with intrigue in patches but light on significant action, Doncaster’s St Leger meeting steps up a gear on Thursday as the G2 Park Hill S. and G2 May Hill S. feature for the fillies and mares. The former, long known as the “Fillies’ St Leger”, offers a fascinating clash between the generations with Shadwell’s formidable 4-year-old Enbihaar (Ire) (Redoute’s Choice {Aus}) at the mercy of weight-for-age having to give 10 pounds to the fast-improving year-younger Dame Malliot (GB) (Champs Elysees {GB}). Enbihaar comes here on the back of wins in the 12-furlong G2 Lancashire Oaks at Haydock July 6 and the G2 Lillie Langtry S. over just short of this trip at Goodwood Aug. 3. The manner of her five-length success in the latter contest marked her as a potential top-level performer, but the form has subsequently failed to prove more than moderate and she will have to be at her best here.

“We did consider the Irish St Leger, but Sheikh Hamdan decided he’d rather keep her at home for the time being,” the owner’s racing manager Angus Gold explained. “I saw her work last Saturday and she certainly looked in top form, so I would hope she’ll run very well. If all goes well, she can go to France on Arc weekend [for the G1 Prix de Royallieu at ParisLongchamp Oct. 5].”

Anthony Oppenheimer’s Dame Malliot burst onto the scene when taking Newmarket’s Listed Aphrodite S. by five lengths July 20 and followed up in Deauville’s 12 1/2-furlong G2 Prix de Pomone on unsuitably testing ground Aug. 18. “She’s obviously got a Group 2 penalty to carry, but I think she’ll be better suited by this ground,” trainer Ed Vaughan commented. “The ground was just too soft for her in France last time, but she got away with it on the day. She should get the longer trip–being by Champs Elysees out of a Galileo mare. She’s only done routine work since her last run, but she seems in good form so we’ll see how we go.”

In the May Hill, it is the juvenile fillies who star in a Guineas and Oaks pointer with Sheikh Mohammed Obaid Al Maktoum’s Cloak of Spirits (Ire) (Invincible Spirit {Ire}) understandably attracting much attention after her impressive Ascot debut July 26. Successful by 3 1/2 lengths in a smart time, the Richard Hannon trainee looks to be more about miling speed than middle-distance performer on pedigree and this mile trip is possibly as far as she wants to go. “We fancied her to run well at Ascot on debut, but didn’t quite expect her to do it the way she did so we very quickly knew we had a good filly on our hands,” Hannon said. “This race has been the plan ever since and hopefully we can go on to the [Oct. 11 G1] Fillies’ Mile [at Newmarket] after this. Obviously it’s a good race, but she’s a good filly and I’m really excited about seeing how far she can go.”

Aidan O’Brien collected this 12 months ago with Fleeting (Ire) (Zoffany {Ire}) and puts forward Passion (Ire) (Galileo {Ire}) who opened her account over this trip on yielding ground at Cork 10 days previously. As a ful-sister to the Leger hero Capri (Ire) she falls much more into the Oaks category and she is most likely to be sent forward as she was last time. That may mean an early engagement with Alan and Mike Spence’s West End Girl (GB) (Golden Horn {GB}), who made virtually all when capturing the seven-furlong G3 Sweet Solera S. at Newmarket last time Aug. 10.

“She was impressive last time out, when she went a bit quick really but still won and was even going away at the finish,” Mike Spence said. “She doesn’t look like a middle-distance filly to me. Her dam was quick and won over six furlongs, but she is by Golden Horn so it will be interesting to see how she does over the winter. It looks a competitive race, Aidan O’Brien’s was very impressive last time out and she looks like she’ll excel over middle distances next year.”

Along with West End Girl, Chasemore Farm’s homebred Boomer (GB) (Kingman {GB}) boasts pattern-race-winning form having come out on top in the seven-furlong G3 Prestige S. at Goodwood Aug. 24. Strictly on form, she has something to find with West End Girl on a line through Dark Lady (GB) (Dark Angel {Ire}) who was beaten by both in the Sweet Solera and Prestige. “We were delighted with her win last time out and the step up in trip should suit,” trainer Tom Dascombe said. “She’s like her mother [Wall of Sound (GB) (Singspiel {Ire})] in that she’s improving with every run and is a real trier.”

In an intriguing renewal, John Gosden saddles Tweenhills and Meridian International’s impressive Aug. 28 Kempton scorer Run Wild (Ger) (Amaron {GB}), Charlie Appleby the Aug. 17 course-and-distance maiden winner Alpen Rose (Ire) (Sea the Stars {Ire}) and Hugo Palmer the authoritative Newmarket winner Powerful Breeze (GB) (Iffraaj {GB}). The latter scored by 2 3/4 lengths in a seven-furlong novice contest Aug. 23 and is out of a Godolphin mare who was an impressive scorer herself over this trip as a 2-year-old. “We’ve always liked her and she came to hand quite quickly, scoring on debut at Newmarket,” Palmer said of Dr. Ali Ridha’s bay. “Everything has gone well since and we’re hoping to get some black-type. On pedigree, the step up in trip should suit her.”