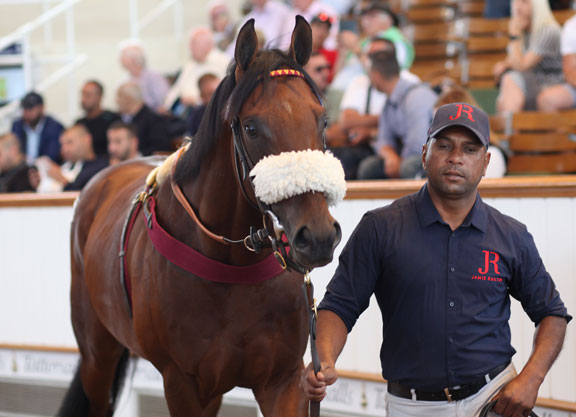 New King (GB) (lot 710) became the second-highest priced horse in the history of the Tattersalls July Sale when selling to Australian-based agent James Harron for 450,000gns.

Consigned by Jamie Railton as agent, the well-bred son of Frankel (GB) appealed on paper, having brought his official rating to 102 with an impressive eight-length win over nine furlongs last time out. In fact, he was the reason for Harron’s presence in Newmarket. He said, “I haven’t been to this sale for a few years and I specifically came for this horse. European horses have been doing extremely well in Australia, especially in the last few years, and Timeform is a very handy guide for us in sourcing suitable horses.”

New King was bought for a group of existing clients, though his future trainer and a potential campaign have yet to be decided. Explaining his appeal, Harron commented, “He’s a lovely horse– he’s not overly big but has very good form and is highly rated by Timeform. If you compare him to horses exported from Britain to Australia, he fits the profile of those who have done very well previously. We all know how difficult it is to get horses like this and he has been very well-managed.”

Last year’s July Sale was a tough act to follow, particularly with fewer horses offered this year, but in spite of this figures increased across the board. Strong trade over the three days saw 93% of lots find new homes; bettering last year’s 87%. They contributed to an increased total aggregate of 12,748,800gns, while the average improved by 11% to 23,830gns, and the media grew by 20% to 12,000gns.

At the conclusion of sale, Tattersalls Chairman Edmond Mahony reflected, “This has been another strong renewal of the Tattersalls July Sale. Two lots selling for more than 400,000 guineas for the first time at this fixture, a record July price for a filly in training and improved figures in all the key indicators of turnover, average, median and clearance rate are about as many positives as one could wish for.”

Mahony said he was delighted by the variety of buyers active. “Domestic British and Irish buyers have been prominent and every sector of the market has been further boosted by international demand, which has included the sale-topping 450,000gns 3-year-old colt New King, who was purchased by leading Australian based bloodstock agent James Harron, the prolific buying of our loyal buyers from the Gulf region and a particularly strong contingent of buyers from Greece,” he said. “There have been buyers at Park Paddocks this week from more than 30 different countries and it is a source of pride that many of them would view Tattersalls as their primary, if not only, source of Thoroughbreds year-after-year.”

Jono Mills was among those who tried but failed to secure the top lot, but gained some compensation when buying the next most expensive horse, listed winner Inverleigh (Ire) (Excelebration {Ire}) (lot 824), for 350,000gns. Offered by Michael Downey, who owns the 3-year-old in partnership with Kildaragh Stud’s Antoinette Kavanagh, the colt ignited a hard-fought bidding duel with Dubai trainer Ahmed bin Harmash, who was standing with Amer Abdulaziz of Phoenix Thoroughbreds. The resulting price repaid Kavanagh and Downey’s faith in Inverleigh, who they had originally bought as a foal for €30,000.

“He didn’t make the yearling sales,” explained Downey. “Peter Kavanagh’s son Roderic always said he was good, from the day he broke him, but when he didn’t breeze well, we decided to retain him.”

He quickly rewarded connections, winning on debut before running consistently in stakes contests. Commenting on Inverleigh’s career to date, Downey said, “Ger Lyons did a fantastic job with him and he’s always run very well–he only once ran out of the placings at stakes level. He was second in a Group 3 last time out and his form is very strong.”

So why part with him? “We’re traders, we’re dealers,” explained Downey, adding, “We thought we’d sell him at the July Sale when he had some mileage left in the tank for someone else.”

Gassim Mohammad Ghazali claimed top honours on the buyers sheet, with his 18 purchases totalling 1,316,000gns. Contributing to his haul was 160,000gns buy Make A Wish (Ire) (No Nay Never) (lot 735), who won a seven furlong handicap on the Coral-Eclipse undercard on her final start for Simon Crisford.

Standing alongside the leading Qatari trainer, agent Will Douglass commented, “She ran very nicely at the weekend. Those races are hard to win, especially on the Eclipse undercard. She’ll qualify for a lot of races in Qatar, so hopefully we can squeeze a bit more out of her. She’s by a good sire in No Nay Never, plus you would expect her to like firm ground, which is obviously important for us.”

The Kevin Prendergast offering Sam Langford (Ire) (Footstepsinthesand {GB}) (lot 821) will join Make A Wish at Ghazali’s stable, with the recent maiden winner valued at 92,000gns in the ring. The 3-year-old finished third on debut and was narrowly denied next time out, before scoring over a mile by 3 1/2 lengths.

Mags O’Toole forced Oliver St. Lawrence to 130,000gns for four-time winner New Show (Ire) (New Approach {Ire}) (lot 862A), his fifth purchase of the week for Fawzi Nass. The 4-year-old’s appeal was obvious, the agent explained. “He was a lovely looking horse and ticked all our boxes, right up to the outside ring, where he showed a very sensible attitude.”

Offered by trainer Michael Bell’s Fitzroy Stables as a wildcard, New Show is a son of top race mare Music Show and has proven form on good-to-firm ground.

Among St. Lawrence’s other purchases on the day was the Jamie Railton-consigned Wiretap (Fr) (Charm Spirit {Ire}), catalogued as lot 711 and for whom he parted with 75,000gns for. Trained by David Simcock, the June winner brought his official rating to 83 when upped in class last time out when he finished third.

From the same consignment came lot 708, Military Law (GB) (Dubawi {Ire}), also owned and bred by Qatar Racing. Nasir Askar, who operates in Dubai as Oasis Stable, was the successful purchaser at 110,000gns and his racing manager commented on their newest recruit, “He has been running very well, especially last time out, and with his rating he will qualify for the Dubai Carnival. We believe he has a good chance of suiting racing in Dubai and will dream of running him on World Cup night.”

A 2-year-old winner over a mile, Military Law was last seen winning a competitive handicap over the same distance in June. Trained by John Gosden, he is a half-brother to listed winner Marina Piccola (Ire), whose son French King (GB) won Doha’s valuable local Group 1, the Amir Trophy, before posting back-to- back Group 2 victories in Germany.

Later in the afternoon, Nasir Askar went to 60,000gns for lot 743, Scat King (Ire) (Scat Daddy), consigned by Richard Hughes’s Weathercock House Stables. The 3-year-old gelding had primarily raced on the all-weather and gained his maiden win at Southwell by six lengths in April.

Another bound for sunnier climes is Count Calabash (Ire) (Big Bad Bob {Ire}) after selling for 100,000gns to bloodstock agent Paul Harley, acting on behalf of Abdul Rahman Fahd Al Bawardi’s Emblem Stables. Harley, who previously trained in Germany, explained what drew him to lot 794: “He’s been bought to go to Saudi Arabia, where they race on dirt, so his high all-weather rating of 102 was a big draw. The 5-year-old factor was a concern, but with his form on the all-weather, he could be a very good horse in Saudi Arabia.”

Harley also mentioned that the bay came highly recommended by trainer Eve Johnson-Houghton, who added Fearless Warrior (Fr) (Sea The Stars {Ire}) to her string earlier in the day at a cost of 90,000gns. Consigned by Jamie Railton as lot 709, the half-brother to two stakes winners won his maiden as a 2-year-old before finishing second in a valuable 10-furlong contest at Newmarket.