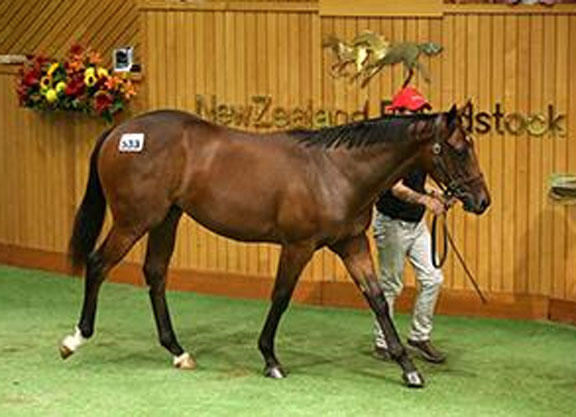 As was the case at the Premier Sale, the Select Sale enjoyed strong international participation. Buyers from Hong Kong, Australia and Singapore accounted for 54% of the aggregate while domestic buyers bought 78 Lots (56% of those offered) for $3.1-million, or 46% of the days turnover.

The session's co-toppers are both destined for future racing careers in Hong Kong, with plans to receive their early education in New Zealand, after being sold for NZ$180,000. First up was lot 533, a son of Zacinto (GB), who sired last year's G1 New Zealand Two Thousand Guineas winner Ugo Foscolo (NZ). The colt was picked up by Bryce Tankard's Waikato Bloodstock in conjunction with Kangyu International Racing.

“Thankfully for us after the last couple of days it was a lot easier to buy a horse and we were able to purchase four lots,” Tankard said. “The Zacinto colt is a stand-out being a quality individual with great presence that we were keen to secure as soon as we first laid eyes on him. He will do his early education here in New Zealand and then if he goes as good as he looks he will be racing in Hong Kong.”

Equaling the top price later in the session was lot 622, a son of Casino Prince (Aus) from Waikato Stud who was hammered down to TP Racing.

Colts dominated the day, filling the first 21 spots on the leaderboard and accounting for all 16 six-figure offerings. The second most expensive sale was lot 638, a son of Group 1 sire Per Incanto for NZ$170,000.