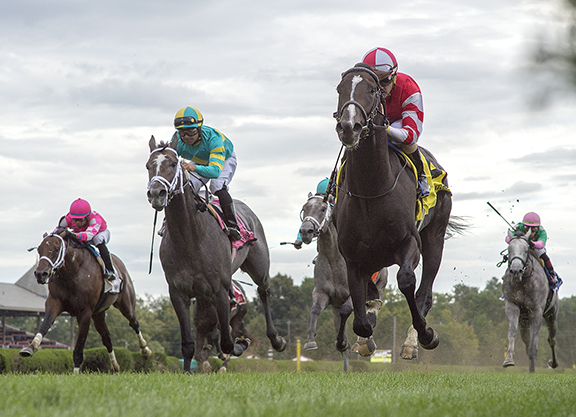 Fighting Seabee became the first stakes winner for his freshman sire Summer Front (War Front) with a decisive score in the GIII With Anticipation S. at Saratoga Wednesday. A debut winner going a mile on the lawn at Ellis Park July 6, the bay colt was bet down to 5-1 from a 10-1 morning-line quote. Seizing the early advantage, the bay avoided trouble as a slow-breaking Our Country (Constitution) rushed up and attempted to push through on the fence, interfering with Tuggle (Point of Entry) and Andesite at the back of the compact bunch heading into the first turn. New York-bred Fly Fly Away (First Samurai), a half to talented turf sprinter Disco Partner (Disco Rico), pressed from a head second on the fence as Fighting Seabee walked the dog through opening splits of :24.21 and :50.50. Fly Fly Away called it quits in the lane and Field Pass took up the baton, but proved no match for the pacesetter, who had plenty left in the tank. Fighting Seabee kept on finding to hold that one at bay.

“We got lucky,” said winning rider Brian Hernandez. “Going into the first turn, we were on the lead and I heard a couple of guys holler back there but in a short field that can happen. No one really wanted to go and we all were bunched up. Luckily, we were on the right horse that was able to put us in a good position. Going into the second turn, I let him out and he picked it up just to where we were able to get moving and he was able to hold all of those other horses off. He crossed the wire with his ears up, so you got to be confident about that.”

“We've had our luck with our horses breaking their maidens at Ellis earlier in the season,” said winning trainer Ken McPeek. “Of course, this horse was ready before this meet started. He won down there going two-turns and we wanted to keep him at two turns. He's been a horse that's been really easy. We've been around enough young horses over the years that the good ones standout. He's never been outworked in the mornings and up to now in the afternoon as well. It's a good position to be in and hopefully he takes us to the [GI] Breeders' Cup [Juvenile Turf].”

Runnymede Farmpurchased Broke N Dixie for $27,000 at the 2015 Keeneland November sale. Fighting Seabee is the unraced mare's only reported foal. The winner's second dam is stakes winner Blushing Dixie, who is a half-sister to multiple stakes winner Queen Greeley (Mr. Greeley). Blushing Dixie produced a filly by American Pharoah in 2018 and a colt by Cairo Prince this year.