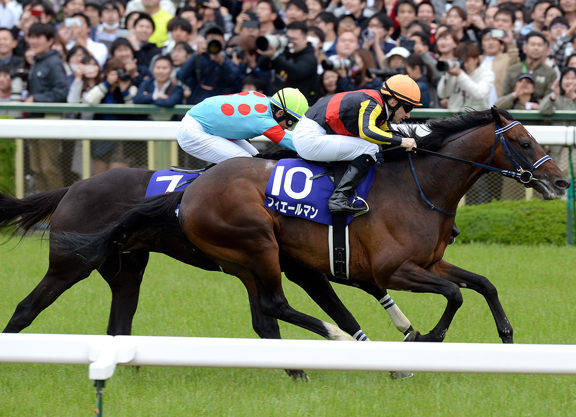 Older horses take center stage at Kyoto Racecourse Sunday in the G1 Tenno Sho, and featured among the entries is last year's winner, Fierement (Jpn) (Deep Impact {Jpn}), who has been set as the 2-1 early choice to become the fifth horse in the history to win the spring even in consecutive years. Winless since last year's Tenno Sho, he was third in the G2 Sapporo Kinen in August before finishing 12th in the G1 Prix de l'Arc de Triomphe. Most recently, he was fourth behind Lys Gracieux (Jpn) (Heart's Cry {Jpn}) in the Dec. 22 G1 Arima Kinen.

“He didn't handle the ground in the Arc, but his run in the Arima Kinen was encouraging, given what a tough race it was,” explained trainer Takahisa Tezuka. “He's since been at Northern Farm Tenei for a break, and after returning to the stable on [Apr.] 3rd, he's been moving well and showing that he's in good condition.”

You Can Smile (Jpn) (King Kamehameha {Jpn}) has proven his consistency, winning six of 15 starts between 1800m and 3400m and has never finished off-the-board at 3000m or more. Fifth in this race last year, the 5-year-old finished fourth in the Tenno Sho Autumn before rounding out the season with a fifth-place effort in the G1 Japan Cup in November. In his 2020 return, he came from off the pace to win in the Mar. 22 G2 Hanshin Daishoten.

“He ran smoothly in the first half of the race last time, and picked up well between the third and fourth corners, getting a good run on the inside to go on and win,” said Yasuo Tomomichi. “He was [over] 12 kg for that race, compared with the Japan Cup, and that seemed to make the difference.”

In regards to his charge's progress since his victory, Tomomichi added, “In training Apr. 16, he worked solo on the woodchip course, but he moved well.”

Regular rider jockey Yasunari Iwata sustained a fall last weekend, and according to Tomomichi, “Things are on hold as to who might take the ride on You Can Smile.”

One of two runners trained by Katsuhiko Sumii in this season's Tenno Sho, Kiseki (Jpn) (Rulership {Jpn}) won the 2017 renewal of the G1 Kikuka Sho (Japanese St. Leger), but has been winless since. In 10 starts since that victory, Kiseki has finished better than third in six of those starts, including a third in the G2 Prix Foy at ParisLongchamp in September. Seventh over a rain-softened turf course in the Arc, the 6-year-old was fifth after a poor start in the Arima Kinen before returning this term to finish seventh as the favorite in his latest start in the Hanshin Daishoten.

Assistant trainer Takashi Kotaki commented: “He got off to such a poor start [in the Hanshin Daishoten] that a gate test was necessary with him. That was on [Apr.] 15th, and he passed that with no problem, so we've been able to get on with his training since.”

Yutaka Take, eight-time winner of the spring Tenno Sho, will ride Kiseki for the first time.