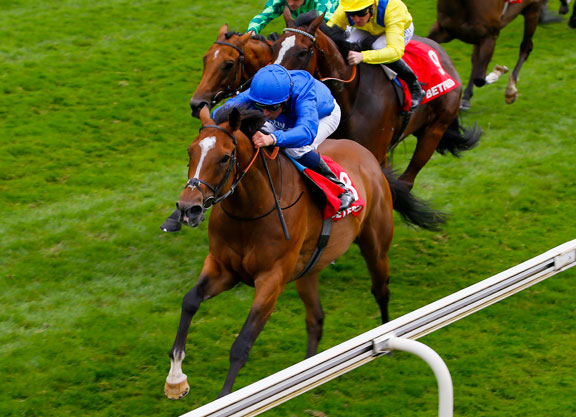 There is strong European interest in Saturday’s G1 BMW Caulfield Cup with three confirmed starters including Godolphin’s Scottish (Ire) (Teofilo {Ire}), Sir Isaac Newton (GB) (Galileo {Ire}) from Ballydoyle and Articus (Fr) (Areion {Ger}), trained in Germany by Andreas Wohler. Charlie Appleby thinks he has the right horse for the A$3m race and with Scottish having drawn gate seven, Appleby is more than hopeful. “I’m delighted with barrier seven,” said Appleby. “It gives Kerrin [McEvoy] plenty of options. If we can get a nice clear run into the race we are hopeful of being very competitive.” The German challenger Articus, drawn in stall eleven, won a Group 3 in Hannover in July and has since been purchased by Australian Bloodstock, whose Jamie Lovett commented, “I would suggest he would position up forward of midfield. It will depend on where the speed comes from. A few of those lightweights will probably roll forward from out wide.” Aidan O’Brien’s Sir Isaac Newton ran some solid races in Group 1 company over the summer and he is drawn between the other European pair in stall nine. TJ Comerford is overseeing the Coolmore colt’s preparation in Australia and is delighted with how he has adjusted to his new surroundings. “This lad is thriving and he looks magnificent, said Comerford. “He seems to be doing everything right in his work and I’m very pleased with him.” Current favourite for the race is the Ciaron Maher trained Jameka (Aus) (Myboycharlie {Ire}), second to Hartnell (GB) (Authorized {Ire}) in the G1 Turnbull S. last time and the filly will jump from barrier thirteen on Saturday. Maher is philosophical about the draw and told Racing And Sports, “It’s not the outside and it’s not the inside. You need to draw a barrier to win the race but I cannot control that. I can only control what I can and that’s getting the horse fit and she’s in good order.”