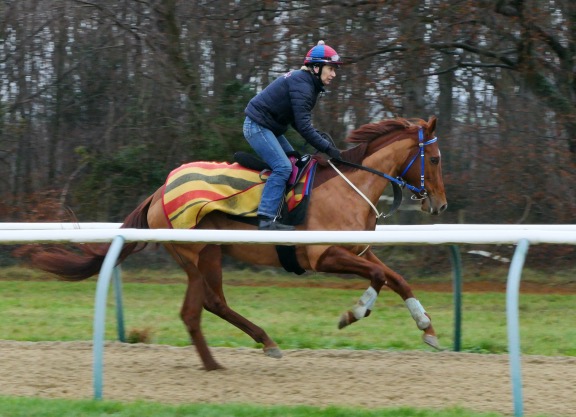 Newmarket's Craven meeting cranks up on Wednesday, with the G1 1000 Guineas aspirants tackling the G3 Lanwades Stud Nell Gwyn S. up the Rowley Mile that plays host to the May 2 Classic. As usual, the seven-furlong prep has some genuine prospects for the big occasion including Normandie Stud's TDN Rising Star Love Is You (Ire) (Kingman {GB}), who oozed class when beating the smart Gift List (GB) (Bated Breath {GB}) by 3 1/2 lengths in the Listed Radley S. on testing ground over this trip at Newbury in October. Roger Charlton has yet to win the 1000, but the homebred daughter of the G1 Coronation S. heroine Fallen For You (GB) (Dansili {GB}) has the right credentials on pedigree and a convincing performance here will see her offer stern opposition to the ultra-exciting but totally-unproven Santa Barbara (Ire) (Camelot {GB}) in over three weeks' time.

Jockey Jason Watson is hoping she can continue her trajectory towards the main event. “Love Is You is exciting. She has wintered well and looks great,” he said. “Steve Raymont, who rides her out every day, has been very happy with her. I've not sat on her, but I've confidence in the team and what they think and I think she should run well. Though she has won at Ascot and Newbury, which are pretty level tracks I don't think the track will be an issue as she is quite well-balanced. She won on heavy ground at the end of the season, but I don't think she necessarily needs that ground and I think good ground is what she wants. Stamina will be no issue, while she looks stronger this year and that seems to have increased her speed a bit.”

Also unbeaten is the Sangsters and James Wigan's Saffron Beach (Ire) (New Bay {GB}) with vital course-and-distance experience from both her debut and the G3 Oh So Sharp S. in the autumn. Trainer Jane Chapple-Hyam commented, “I feel that Saffron Beach has wintered well and she is training well. She looks fantastic in her coat. She has had no hiccups with her build-up and we have taken her over to the watered gallop two weeks ago to test her. She has developed into a 3-year-old and what she did at two was a bonus.”

Charlie Appleby puts forward Divine Light (Ire) (Kingman {GB}), who also scored over this track and trip on her sole start in October, while John and Thady Gosden supply another unexposed Kingman in Hissa Hamdan Al Maktoum's Chelmsford novice scorer Tawahub (GB). Appleby said, “Divine Light is a sharp filly, with a course-and-distance win under her belt. It looks a competitive renewal of the race and this should tell us where we are with her.”

The card gets underway with the Bet365 British EBF Maiden Fillies' S. for the 2-year-olds, where high-profile freshmen Ribchester (Ire) and Highland Reel (Ire) have representatives, while the Bet365 European Free H. hosts Godolphin's Feb. 25 G3 Meydan Classic winner Naval Crown (GB) (Dubawi {Ire}) who beat the fellow Charlie Appleby-trained Master of the Seas (Ire) (Dubawi {Ire}) there. He will have to be smart to give eight pounds to Eve Johnson Houghton's G3 Horris Hill S. runner-up Percy's Lad (GB) (Sir Percy {GB}), but the latter's trainer issued a note of caution when she said, “A few of mine appear to be needing the run and we have had some disappointing results, but he deserves to be there and he did nothing wrong last season. It was too soft for him at Newbury and we know he stays a mile and that is probably what he wants. I know we are dropping back to seven, but he is working well and I'm happy as I can be.”

In the G3 Bet365 Earl of Sefton S., Frankie Dettori announces his return to home soil as he partners Isa Salman Al Khalifa's impressive Mar. 27 Listed Magnolia S. winner Global Giant (GB) (Shamardal). Now turned 50, Dettori is relishing being back on his territory. “I'm looking forward to riding back in Britain and getting back on Global Giant, who is owned by a good friend of mine Sheikh Isa,” he said. “This looks a good spot for him and nine furlongs should be ideal. It is a good ride to have as my first ride back in Britain this year. I've really been enjoying things and I'm really looking forward to seeing people back at the races here. Fifty is a big number and it does scare me a bit sometimes, but the body feels good at the moment thank God and I'm enjoying my racing.”

The closing 10-furlong handicap has been won by Papal Bull (GB) (Montjeu {Ire}), Main Sequence (Aldebaran) and Old Persian (GB) (Dubawi {Ire}) and so can carry weight as an early guide to potential. Carrying topweight is Godolphin's Act of Wisdom (Ire) (Galileo {Ire}), a son of the disqualified 1000 Guineas winner Jacqueline Quest (Ire)  (Rock of Gibraltar {Ire}) who is on a four-timer for Old Persian's trainer Charlie Appleby.