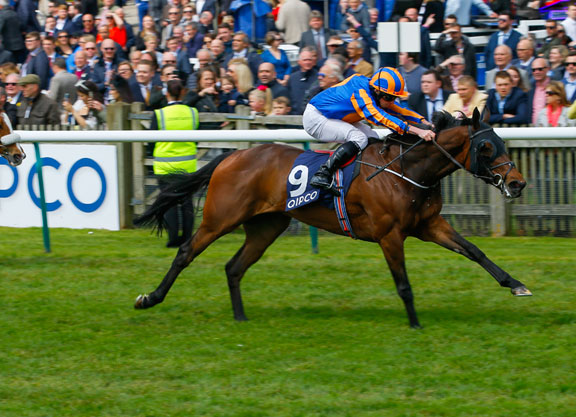 Starting 2016 as an Oaks prospect, Somehow captured the Listed Cheshire Oaks over 12 furlongs before finishing 24 lengths behind Minding (Ire) (Galileo {Ire}) when fourth after setting the pace in the Epsom Classic itself. Fifth in the Irish equivalent at The Curragh in July, the bay was tried in a visor for the first time when second to stablemate Best In the World (Ire) (Galileo {Ire}) in Cork's G3 Give Thanks S. staying at a mile and a half in early August before reverting to this trip to slam her rivals by seven lengths and upwards in the G3 Dance Design S. at The Curragh later that month. Runner-up in the Mar. 26 G3 Park Express S. over a mile at Naas on her return, she stepped forward to garner last Sunday's Listed Victor McCalmont Memorial S. over 100 yards further than this distance at Gowran Park.

This already weak-looking renewal was lessened further as Nezwaah (GB) (Dubawi {GB}) broke through the stalls and was withdrawn, but in Somehow it still fostered a filly who belongs firmly in this grade or better and she duly hammered home her superiority to continue Ballydoyle's momentum at the Guineas meeting. Held up towards the back early by Ryan Moore, she was sent between rivals in pursuit of Elbereth approaching the final quarter mile and needed only to be cajoled past that long-time leader before the furlong pole with the race already decided. Ridden clear with hands and heels from there, she was strong up the climb to outclass her rivals and join the forming queue in her stable for group one opportunity. “She's shown herself to be a high-class filly and dealt with them very easily,” Ryan Moore commented. Aidan O'Brien is pondering a tilt at the May 20 G1 Lockinge S. at Newbury. “We thought she was a very nice filly last year. She loves following pace and she quickens very well. She also likes fast ground, which is also a big help to her. We might have a look at the Lockinge or something like that.”

Elbereth's trainer Andrew Balding said, “It was worth having a go because she was 100 per-cent ready to run and she ran to the best of her ability. She is actually in the [G1] Coronation Cup [at Epsom June 2] and if it looks like it is going to cut up with only four or five runners, we might have a go at that as she handles the track well.” Aim To Please was well-beaten, but trainer Francois Doumen was surprised afterwards. “I didn't expect these undulations to be a problem for her, but they were,” he admitted. “It is the best field she has competed against, but she was running on well. It seems like there is still a bit of improvement in her. There is the [G2] Duke of Cambridge [S. at Royal Ascot June 21] for her and there are also options in France–we could wait for the [G1 Prix Rothschild [at Deauville July 30].”