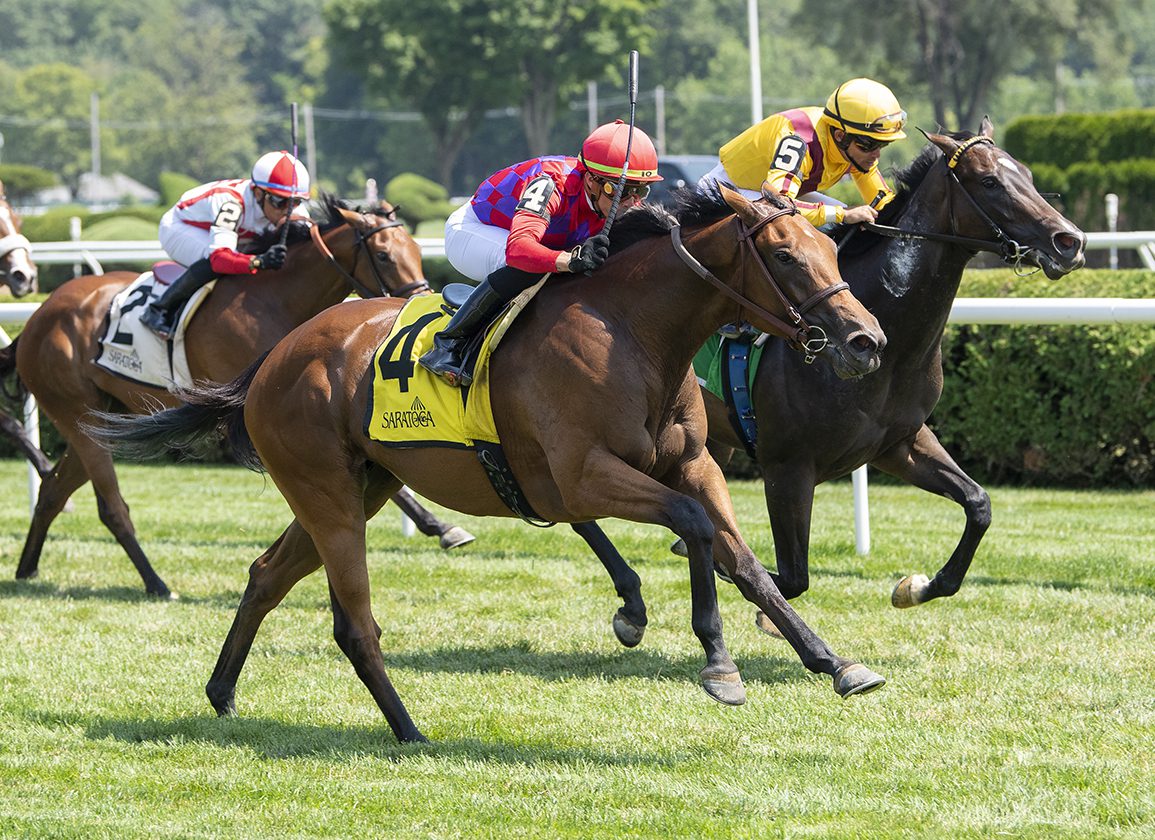 2nd-Saratoga, $105,000, Msw, 8-4, 2yo, f, 5 1/2fT, 1:02.45, fm, 1/2 length.
ALLURING ANGEL (GB) (f, 2, Fastnet Rock {Aus}–All of Me {GB}, by Teofilo{Ire}), a 48,000gns weanling purchase out of the 2020 Tattersalls December Foal Sale, went off as the 4-1 third choice Thursday in her career debut. Far back off the pace with only one horse beat through the opening furlong, she raced two wide outside of Gustiamo (Blame) before clearing to the rail midway around the bend. Under a ride past the quarter pole, Alluring Angel swung out five wide as the field straightened and began to rally with authority down the center of the lane. As pacesetter Illicit (Into Mischief) tired into the final eighth, post-time favorite Cowichan (Ire) (Kodiac {GB}) briefly took over from the three path before being inhaled on the outside by a fast closing Alluring Angel who stormed past in the final strides to win by a half-length. Illicit would fade to wind up fifth. The winner is bred on a similar cross to this owner's Star Devine (Ire) (Fastnet Rock {Aus}), who achieved 'TDN Rising Star' honors with a fast-finishing debut victory at Aqueduct in April 2021. Star Devine, who won last year's Galway S. at the Spa, is out of a daughter of the late Galileo (Ire), while Thursday's winner is out of a mare by Galileo's successful son Teofilo (Ire). All Of Me (GB), herself a half-sister to MG1SP I Can Fly (GB) (Fastnet Rock {Aus}), has since produced a yearling colt by Showcasing (GB) and dropped a colt by Earthlight (Ire) in 2022. Sales History: 48,000gns Wlg '20 TATFOA. Lifetime Record: 1-1-0-0, $57,750. Click for the Equibase.com chart or VIDEO, sponsored by TVG.
O-Lawrence Goichman; B-Michael E Wates CBE (GB); T-Jorge R. Abreu.