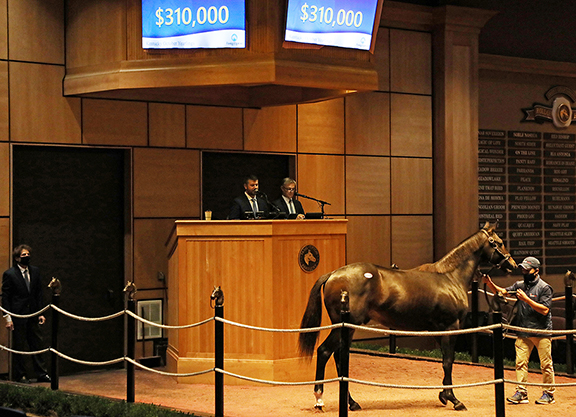 Session-topping hip 1398 in the ring | Fasig-Tipton

LEXINGTON, KY – The Fasig-Tipton Kentucky October Yearlings Sale–and the yearling sales season–concluded Thursday in Lexington with the market continuing to show resilience despite a plethora of worldwide uncertainties.

“All in all, I think it has to be considered a successful week,” said Fasig-Tipton President Boyd Browning Thursday evening. “If someone would have told me at the beginning of the week, or the beginning of the month, or certainly three months ago that the average would be down 10% and the median would be up 15% and the RNA rate would decline, I would have signed up for that immediately with no hesitation whatsoever. It was a legitimate market for four days. The buyers who were trying to buy the perceived better type horses said it was very difficult to buy. There was lots of competition for those horses. We are not going to sit here and say everything is lovely. Anytime a sale has a median of $15,000, it’s tough to make money. The economics of raising a yearling means there were a lot of unprofitable yearlings in this sale. But I think that’s been the case for several years.”

Brian Graves of Gainesway, which consigned two of the five yearlings to sell for $200,000 or over during Thursday’s session, said polarization was a continuing reality in the marketplace.

“It’s thin and everything has to be perfect,” Graves said. “You have to have a really good physical, you have to have a little sire power and you have to have a clean vet. And if you have those three things, you can get a fair to a good price for your horse. Everything else is very thin and shaky and there just isn’t any flexibility after that. Really it’s a free fall after that at this point in time with all the uncertainty and the COVID situation only makes it worse.”

Still, buyers were there for the perceived quality offerings.

Bloodstock agent Mike Ryan, who made Thursday’s highest bid when going to $310,000 to acquire a son of Classic Empire, said, “It’s a lot of work because it’s so spread out–1,500 horses over four days–but you do find some nice horses who missed earlier sales for whatever reason and sometimes a horse who didn’t sell at September comes back here, like that sale-topper yesterday [$600,000 son of Uncle Mo]. He was a beautiful horse. He doubled his price from September to now. It doesn’t happen often, but he was a really good colt. It’s the same old story. If you have a really good horse who vets clean and stands the critique of everybody, you’ll do well.”

Ryan has made almost every stop on the yearling sales scene across the globe, including at Tattersalls and Keeneland.

“I think it’s amazing,” Ryan said of the results he has seen this fall. “I think it just shows you how resilient we are. Thank God that racing resumed back in May because it’s the engine that drives everything. And without racing, we are nothing. But purses have gone back up again in New York, they are back to pre-COVID levels. So it is amazing, but it also very polarized. We just don’t have enough people who want to race a horse, enough people who want to pay $120 a day to want to run one. There are too many middle men, traders, not enough end-users. And that’s a problem, but it’s been remarkable. Who would have thought it? The uncertainty was unnerving and Fasig here in September was good and Keeneland was solid. But it’s the same story. You’ve got to have a nice horse. But that’s the way it is. People aren’t going to pay for average stock. If they like your horse, you’ll be rewarded.”

With the end of the yearling sales season, Ryan said with a smile, “We get a week off and we’ll be back here next Thursday looking at foals and mares.”

Bloodstock agent Mike Ryan went to a session-topping $310,000 to secure a son of Classic Empire on behalf of Seth Klarman. The yearling (hip 1398), who will be trained by Chad Brown, is out of Delay of Game (Bernardini) and from the family of graded winner Sanford and champion Johannesburg.

“He’s a really good colt with a lot of Bernardini in him and a beautiful mover,” Ryan said. “He’s a New York-bred which is nice, but I think he is an open-company class horse. I thought he was the best by the sire that I saw this week–one of the best horses I saw this week. I was surprised to have to go that far for him, but we really wanted him.”

Ryan continued, “Hopefully we will see him at Saratoga next year as a 2-year-old. He’s bred to go two turns, but he looks like a horse who will have natural speed and should be able to run in late summer of his 2-year-old year. We’ve had a lot of luck buying for Mr. Klarman and Chad Brown and I told him this was a horse we had to have and let’s try to get him.”

The yearling was consigned by St George Sales on behalf of his breeder, Dan Hayden’s EKQ Stables.

“I’m very happy with the result,” Hayden said. “I’m delighted that a superior judge like Mike Ryan got him also. He’s a lovely straightforward colt with a lovely motion and balance to him. He’s loaded with quality also. I like what I’m seeing from these Classic Empires.”

Hayden purchased Delay of Game, in foal to Street Sense, for $90,000 at the 2017 Keeneland November sale. The mare was bred and consigned by Godolphin.

“The first thing that appealed to me about the mare was her sire, Bernardini,” Hayden said. “The sky is the limit for his broodmares. I spoke with Danny Mulvihill from Darley who were selling her and he said she was solid with no vices. Kiaran McLaughlin, who trained her, also told me that her race record didn’t necessarily reflect her talent. He said she was a runner. It was also very appealing that she had such a deep family going back to Johannesburg and, of course, Pulpit through that great mare Yarn.”

Hayden continued, “Physically she’s a lovely, scopey, old-fashioned laid-back mare that just throws everything into her foals. They have great mental attitudes and are confident animals just like her.”

“The Street Sense filly could walk the pants off anyone and was absolutely bombproof mentally,” Hayden said. “The Classic Empire is the same and the mare has an absolute standout weanling filly by Accelerate.”

Of the yearling’s first trip through the sales ring at Keeneland last month, Hayden said, “I think he just came into the September sale a slight bit immature and just didn’t hit the mark in a slightly nervous market. He has matured well physically in the meantime and Archie St George and his whole team did their usual superb job and here we are. Spa Ready also broke her maiden impressively at Belmont first time out for Chad Brown and looks like she has a promising future. It’s always a help when they end up in the hands of a trainer like Chad.”

Gainesway sent a trio of yearlings, bred on foal shares, by its late sire Empire Maker through the ring at Fasig-Tipton Thursday and came away with three six-figure sales.

“Empire Maker is a super broodmare sire,” Gainesway’s Brian Graves said. “Everybody knows it and that only helps. People would like to have one and their chances to do that are running out.”

Bloodstock agent Tonja Terranova went to $200,000 to acquire a colt by the 2003 GI Belmont S. winner (hip 1173). The yearling is out of stakes-placed Bagatelle Park (Speightstown) and was bred in partnership with Dr. H. Steve Conboy.

“The colt was just everything you’d want to see,” Graves said. “He was leggy, he had good balance and a good walk.”

X-Men Racing purchased an Empire Maker filly (hip 1372), also for $200,000. Bred in partnership with Happy Alter, the Florida-bred bay is out of Curlin’s Mistress (Curlin), a full-sister to multiple graded stakes winner Curlin’s Approval and a half to multiple graded-placed ‘TDN Rising Star’ Apologynotaccepted (Fusaichi Pegasus).

Rounding out the trio of six-figure yearlings was hip 1197, a filly out of graded winner Belleski (Polish Number) who was bred in partnership with Thoreau, LLC. Down Neck Stable acquired the bay for $155,000.

“Both the fillies were very good physicals,” Graves said. “Unfortunately these days, if you don’t have that going for you, it’s impossible to get a good result.”