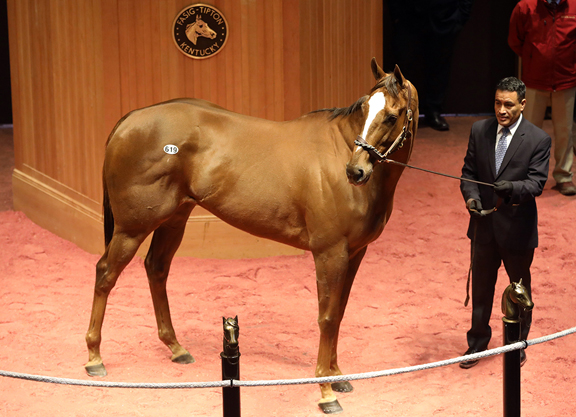 LEXINGTON, KY–After a bit of a quiet opening day Monday, trade was much stronger at the Fasig-Tipton Winter Mixed Sale Tuesday with Remedy (Creative Cause) topping the auction at $570,000. She was purchased by part owner Twin Creeks Racing, which bought out its partners in order to breed the mare to its emerging superstar sire Constitution.

A filly by Street Sense was the sale's most expensive short yearling and is headed to the Fasig-Tipton Saratoga Select Sale after Martin Keogh signed the $265,000 on behalf of Tami Bobo's First Finds. There was also a high-priced RNA in Evocative (Pioneerof the Nile), who left the ring unsold at $575,000.

Remedy, Evocative and Flashly (Denman {Aus})–who was the second highest-priced offering at $310,000 and sold in foal to American Pharoah–were all part of the supplemental catalogue.

“We got some really nice horses that came in late,” said Fasig-Tipton President Boyd Browning. “A horse like Remedy was a standout, but she would be a lovely mare wherever she is. I think sellers have confidence you can bring a quality horse in February and be rewarded.”

“It is a continuation of the world that we live in,” said Browning. “There are either multiple bidders on your horse or you pray to God you have one bidder. It is hard to appraise horses in the world we live in today. The ones who jump through the hoops bring significantly more than you thought and the ones that miss bring significantly less. You have to adjust your expectations after you get on the sales grounds.”

Buyers and sellers alike found the market to be a bit spotty with quality still in demand.

“It is very spotty, but the quality is very spotty so it is hard to gauge it,” said Frank Taylor, whose Taylor Made Sales sold the topper. “For a very good horse, there is definitely money here.”

Keogh saw the same from the buying side, saying, “It is the usual horse sale market–polarized. Everyone wants the quality individuals.”

Douglas Arnold found the market to be a soft, but was still optimistic as the sale season moves forward.

“I think that maybe it is a tad soft,” he said. “It is competitive for the horses that people want. I think there is a lot of optimism in the market place for good mares and good yearlings. I think all those things bode well going forward.”

The MGSP Remedy (Creative Cause) (hip 619) sparked some late fireworks during the supplemental catalogue, but when the dust settled she ended up in familiar hands with part owner Twin Creeks Racing buying out their partners on the $570,000 sale topper. Twin Creeks did their bidding over the phone with Fasig-Tipton's Reed Ringler.

Twin Creeks purchased Remedy for $200,000 as a Keeneland September yearling. Medallion Racing and Parkland Thoroughbreds bought in after she finished second in the 2018 GIII Comely S. The Brad Cox pupil retired with a record of 13-3-4-0 and earnings of $217,344. In addition to placing in the Comely, she also finished second in the GIII Remington Park Oaks.

“We bought her as a yearling and we had some guys buy into her as a racehorse, so we just bought them out,” said Twin Creeks's Randy Gullatt when reached by phone. “She is going to be bred to Constitution.”

He continued, “She was extremely popular. It was on the high end of what I thought.”

A half-sister to SW and GSP Harry's Holiday (Harlan's Holiday), Remedy is out of a daughter of blue hen Leslie's Lady (Tricky Creek), who is the dam of four-time champion Beholder (Henny Hughes), GISW Mendelssohn (Scat Daddy) and top sire and GISW Into Mischief (Harlan's Holiday). She was bred by Brereton and Ned Jones and consigned here by Taylor Made Sales.

“She is a very good-looking mare,” said Frank Taylor. “She can run some. She has the hottest pedigree going today. I think she can be a foundation mare for somebody. I think she was sold fairly, but I could have seen her bringing some more at a different sale.”

Remedy is the most expensive horse sold at the February Sale since Cinnamon Spice brought $700,000 in 2017.

Flashly (Denman {Aus}) is a nice horse in her own right, but was given a boost here as the only mare in the catalogue in foal to Triple Crown winner American Pharoah, who led the freshman sire standings last term. Bloodstock agent Hanzly Albina, acting on behalf of an undisclosed client, fended off all challengers to take home hip 630for $310,000.

“I think the covering sire is obviously doing very, very well,” said Albina, who did his bidding from the upstairs press box. “You can always use a mare in foal to American Pharoah and the pedigree has multi-generational excellence. It is a very good filly family and it is nice to get into it. She is a good-looking individual and it was a fair price.”

Flashly RNA'd for $285,000 at Keeneland November when selling with Taylor Made. In the interim, all of Zayat Stables' assets were put into receivership after MGG Investment Group sued Ahmed Zayat for $23-million and accused them of defaulting on their loans.

The appointed receiver, Elizabeth Woodward of Dean Dorton, supplemented six Zayat horses to the February Sale as hips 629 through 634 with St. George Sales. Flashly was the most expensive of the group. Stylish Ash (Malibu Moon) (hip 633) brought $31,000 from Marc Detampel; Nomee (City Zip) (hip 632) sold for $19,000 to M&M Racing in foal to Carpe Diem; and Megalicioius (Songandaprayer) (hip 631) brought $6,000 from M&M Racing carrying a foal by Paynter. Fateer (hip 629) and her Paynter yearling filly (hip 634) both RNA'd.

A daughter of Street Sense proved quite popular Tuesday and it was Martin Keogh who won out on the $265,000 short yearling. Keogh was acting on behalf of Tami Bobo's First Finds and indicated the filly would be pointed to the Fasig-Tipton Saratoga Select Sale. Hip 526 was the highest-priced short yearling of the sale.

“I bought her for a good friend of mine, Tami Bobo,” said Keogh, who did his bidding upstairs. “She was looking for a horse to go to Saratoga and that filly fit the bill. She was the best filly on the grounds and the best [short yearling] over the last couple of days. She has a quality pedigree. She just has it all loved her from the first day we saw her.”

He added, “We didn't think she would cost quite that much. But, for the good ones, you have to step up and pay for them. We are happy to get her.”

The gray filly is the first foal out of Froyo Star (Rockport Harbor), who breeder Southern Equine Stables purchased for $420,000 as a 2-year-old at the Fasig-Tipton Midlantic Sale. The 8-year-old mare is a half-sister to MGISW Sweet Reason (Street Sense); GSW and GISP Don't Forget Gil (Kafwain); and SW Battle Girl (Midshipman).

“She is a classy filly,” said Meg Levy, whose Bluewater Sales consigned hip 526. “She has a beautiful stride and is very correct. Times when people are looking at the market forward, having a filly with page is a great place to be. They have residual. It looked like she might have had one of the more real pages in the book. We sold Sweet Reason, who is on the page. It seemed like there were enough people wanting to play the short game that it worked out.”

The 4-year-old filly Chelsea Market (Verrazano) (Hip 460) was the only broodmare in the sale in foal to the late Pioneerof the Nile, which increased her demand Tuesday, summoning $250,000 from Stonereath Stud's Peter Berglar.

“It is a lovely pedigree,” Berglar said. “She is in foal to a sire, who unfortunately is no longer around. There won't be too many left, so that was the appeal for me. That was about where I wanted to be with her. I am glad I didn't find out if I had to stretch more.”

Doug Arnold made Tuesday's first six-figure purchase when going to $150,000 for Appeal to Win (Successful Appeal) (hip 390), who sold in foal to Flatter.

Consigned by Claiborne Farm, the stakes-placed bay mare is a half to MGSW Cool Cowboy (Kodiak Kowboy). This is also the family of stakes winner Afleet Lass (Northern Afleet). She has produced three foals so far, including a 2019 Connect filly who brought $125,000 at the recent Keeneland January Sale.

The 8-year-old mare's late cover did not deter Arnold, who hopes to breed her in 2020, but has not picked out her mate yet.

“I will probably breed her,” said the Buck Pond Farm owner. “We will just see how the foaling goes and how quickly she comes out of it and how early she foals. I am good with that June 2 foaling date because all of your good horses are born in May, right?”