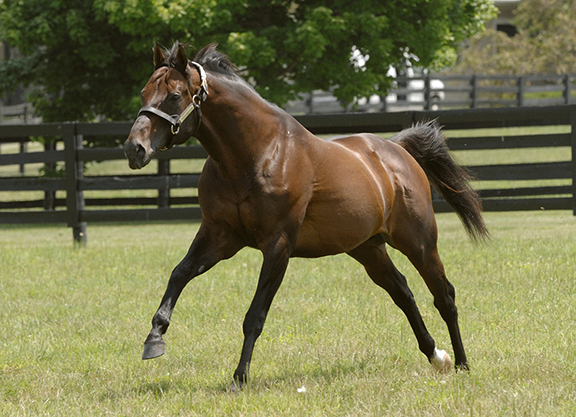 Candy Ride, a great-grandson of Fappiano, ranks among the leading sires of 2017| Lane’s End photo

If you look at the leading sires for 2017 you may deduce that the top two are there only because they have sired one major runner who won a ton of money, i.e., Arrogate for Unbridled’s Song and Gun Runner for Candy Ride (Arg). While that might be true on the surface, and while one might think neither will be that strong at the end of 2018, one might be in that forest-for- the-trees situation.

That’s because Fappiano, the tap root sire of those two stallions, has fired what could be just an introductory shot across the bow of the leading sires lists over the next five years. Fappiano, we say? Yes, indeed. The time has come to acknowledge that even though he was sired by Mr. Prospector, he effectively broke away from his sire’s line in terms of his descendants’ aptitudes both on and off the track to establish his own identity as a sire line founder.

Fappiano has always gone against the grain. For example, his name puzzled just about everyone when he first started racing because that sly kidder John Nerud, who bred him, named him after Joe Nichols, a great sports writer who was born Giuseppe Carmine Fappiano. (Nerud also carried this deception off again by naming Cozzene to reflect an Americanized version of how Italian-American stable hands referred to their cousins-their “cuggini.”)

Fappiano retired to stud in Florida, and by the time of his untimely demise at age 11, after moving to Kentucky, Fappiano had sired three sons who would establish strong Classic sire lines that live on today. They are Unbridled, through his sons Unbridled’s Song and Empire Maker; Cryptoclearance, through his grandson Candy Ride (Arg); and Quiet American, through his grandson Midnight Lute. Lest we forget, these three came after Fappiano established his reputation as a sire-of-sires with his son Roy, who dominated South American racing in the 1980s while standing in Argentina, Chile, and Brazil, before being repatriated to this country. Along the way, Fappiano also sired the talented speed influences Rubiano and Pentelicus, who did not carry on in male lines.

One of the most interesting things about how this line developed on pedigree is that none of the broodmare sires of Fappiano’s three leading sons are from the same sire line: Hoist the Flag (Ribot) for Cryptoclearance; *Le Fabuleux (Wild Risk) for Unbridled; and Dr. Fager (Fappiano’s own broodmare sire from the totally domestic line of Plaudit), for Quiet American. There are similar dichotomies in the broodmare sires of the leading sons of those three and most other successful Fappiano sons.

However, a study of the physical measurements of more than 80 of the sons and male-line descendants of Fappiano points out a consistent pattern of phenotypical and biomechanical similarities starting with the trait most obvious to the naked eye: Size.

Fappiano absolutely inherited overall balance and efficiency from both Mr. Prospector and Dr. Fager, but he got his size from the latter, who in several key respects was a couple of inches longer, or taller, than Mr. Prospector–dimensions which he passed on to Fappiano, who was very consistent in stamping his best running, and siring sons, with those important qualities. Those factors helped many of them sustain their natural speed over longer distances and are possessed by some of the tribe who are not necessarily large horses.

What they have inherited is an abundance of speed which we now see coming through in subsequent generations. All you need is to look at the leading second-crop sire, and it turns out that he might be bringing back some of the memories of the speed and tenacity of his sire’s influence with Empire Maker’s Bodemeister sitting there, thanks, in part, to Always Dreaming. (And we haven’t even begun to talk about Pioneerof the Nile and Twirling Candy).

Fappiano may not “be back,” for he never left us, but he is in the middle of his own renaissance, or, if you will allow linguistic purity, risorgimento.

Bob Fierro is a partner with Jay Kilgore and Frank Mitchell in DataTrack International, biomechanical consultants and developers of BreezeFigs. Bob may be contacted at [email protected].