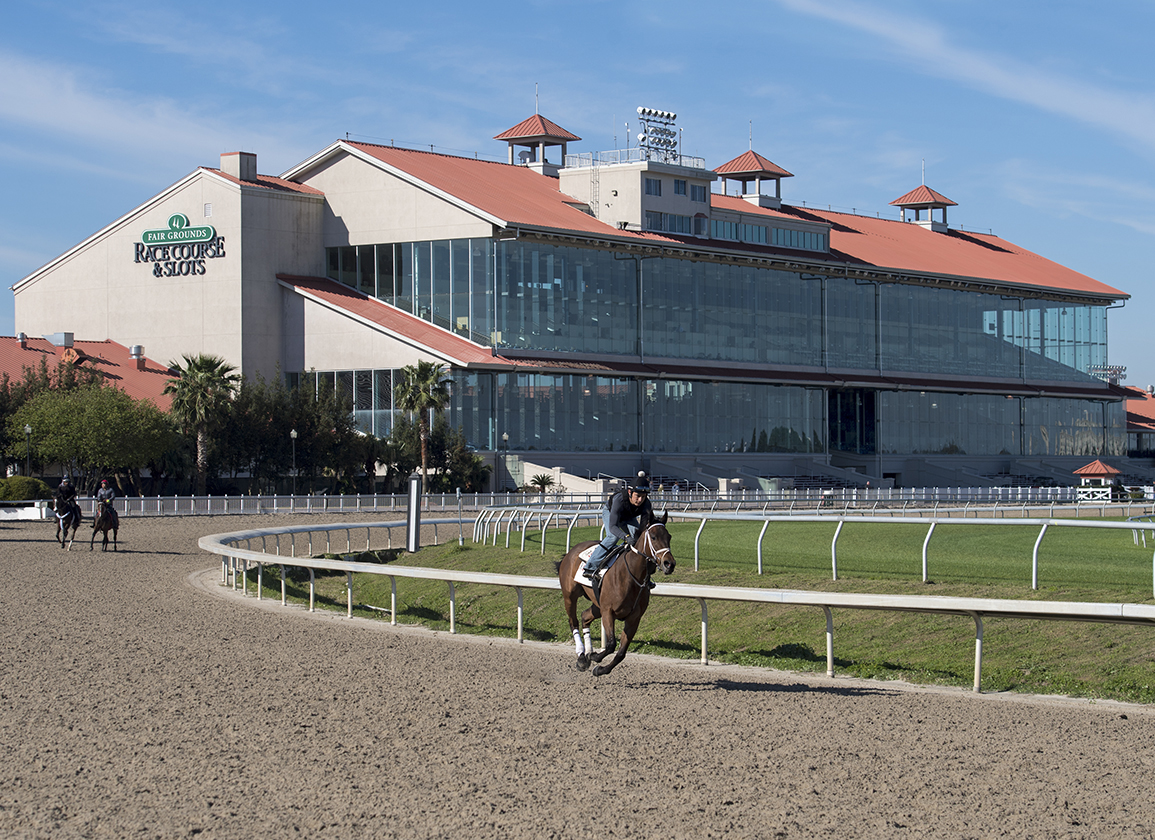 Jason Boulet, the Fair Grounds director of racing, was repeatedly pressed by Louisiana State Racing Commission (LSRC) member Tom Calvert Tuesday about whether or not his track would once again seek a statutory change to reduce its required number of race dates from 80 to 75 when the state legislature convenes its 2022 session Mar. 14.

The exchange did not yield a definitive answer beyond Boulet's disclosure that the Fair Grounds and its corporate parent, the gaming firm Churchill Downs, Inc. (CDI), would be in favor of participating in discussions among stakeholders that might reduce race dates in Louisiana with the goal of making it easier to fill entries at the state's four Thoroughbred tracks.

The dates statute wasn't on the agenda for the Jan. 18 LSRC meeting. But Calvert brought it up after Boulet reported that so far through the November-through-March meet, the number of starters per Fair Grounds race has dipped from 8.3 to 7.6 in a year-over-year comparison, a decrease Boulet termed “alarming.”

“The struggle for entries is a reality for us,” Boulet said, noting that the Fair Grounds has already had to obtain permission from Louisiana Horsemen's Benevolent and Protective Association (LHBPA) on three occasions during the current meet to card eight-race programs instead of the required nine.

But Boulet also noted that year-to-year comparisons are difficult nationwide because the COVID-19 pandemic has skewed the industry's metrics.

Boulet did manage to make the handle numbers sound rosier by offering a pre-pandemic comparison that stated the Fair Grounds handle is “actually trending up 7%” from the 2019-20 meet.

“Overall handle has been a struggle,” Boulet explained. “That being said, even with that, we've had positive video poker and slots revenues over the year. That's been good for us. And it allowed us to actually do a purse increase for 15%.”

Calvert then wanted to know if Fair Grounds or CDI has legislation either pending or planned to reduce the dates requirement.

“I'm not aware of that, sir,” Boulet answered.

“Wouldn't that be a good thing for you?” Calvert asked.

“I think that, in front of this commission, yeah, I mean, that's always been a very sensitive subject about touching that 80-day minimum statute,” Boulet said. “Again, the Fair Grounds is a proponent of trying to move forward with talking about overlap, and we hope that the conversation is brought forth to this commission. Of course, the HBPA has all the rights to be concerned about moving forward with allowing us to go below the 80 days…”

Calvert then pointed out that last year, the Fair Grounds and CDI advocated for just such a five-date reduction. He noted the provision was included in 2021 racing legislation, “but at the last minute it was pulled out of the bill.”

Boulet then said he has not recently met with the legal counsel or lobbyists the Fair Grounds employs, so he allegedly wasn't sure what might be in the legislative pipeline.

“What I'm saying, I think the commission would be receptive to it,” Calvert said. “We understand that most of the successful models around America have less days than the Fair Grounds has. I just think that you guys can't drag your feet on it. You've got to move it. And sometimes I know it's like swimming against the current, but you've still got to put it out there.”

Boulet said, “I appreciate the way you put it, because I know that in the long run [that] once we are given that door to open, then all the tracks, including Churchill Downs [Inc.], would take advantage and try to move toward these boutique meets and whatever…” Boulet said. “Basically, it comes down to we hope that the commission can consider it case by case, track by track, and the HBPA has to have the final approval…”

LHBPA president Benard Chatters wasn't about to let this back-and-forth between Calvert and Boulet go without getting on the record how his organization's membership felt.

“The horsemen absolutely oppose a reduction in racing dates,” Chatter said. “The Fair Grounds runs 80 days per year. The other three tracks run 84 days, so [Fair Grounds] has a reduction in days that other tracks don't.”

Chatters noted that for some portions of the current meet, the Fair Grounds chose to run five-date race weeks instead of four, compounding race-filling difficulties.

“Everything in the horse world from the [horse] owner's perspective is on the rise,” Chatters said. “Expenses are on the rise. The one thing that's not on the rise is opportunities to race these horses. It is imperative that these owners have as many opportunities to race these horses as they can so that they stay in this business. If you look at the numbers, if you look at all of the positive things that we have coming into racing in the near future [like a cut from online sports betting], you'll be able to see that everything is in place to be able to draw more horses to the state, to bring more horses into the grounds…

“It is very, very critical that you never forget that the owners [of horses] put on this [show] and we're the ones that take all of these [negative financial consequences] by the seat of our own pants,” Chatters said, pointing out that revenues for track operators are “through the roof.”

Chatters continued: “I want to make sure that you're listening. Profits are up, betting is up, and all of this stuff. And so this 'difficulty' in getting horses is kind of far-fetched, I think…When you go to talk about cutting race days and that kind of thing [it] means that it makes it very, very difficult to not necessarily make a profit in the horse racing business as an owner, but just to keep your nose above water so that you're not drowning. When we run these [smaller outfits] out, we're in trouble.”

Calvert then asked, “How do you respond to the criticism of your position which says you want to have terrible horse racing? [That] you want to have races with four or five horses in [them] so that this low level of horsemanship, this low level of trainership, can pick up money and keep being in the business? I mean, I'm of the proposition that this should be sort Darwinistic and that [outfits that can't survive] should be eliminated from the world of horse racing. What do you think?”

Chatters responded by rattling off a sizable list of people and entities that all benefit from purse money trickling down into the economy, including all the way to farmers who grow hay and vehicle dealers who sell pickup trucks.

“So, the importance of as many people participating in horse racing as possible on the state economy is critical, or crucial,” Chatters said.

Chatters answered that those $5,000 claimers sometimes outhandle higher-quality races. Calvert didn't buy that idea. He said not with short fields, they don't.

“I have no problems, Mr. Chatters, with a $5,000 claiming race that has 12 horses,” Calvert said. “I do have a problem with four-horse races. And [CDI] has advised that the reason why [Fair Grounds has them] is because they have an 80-day meet. If they had a 75-day meet, they'd have greater purses, which would be a benefit to the horsemen…”

Chatters, in closing, said, “We're simply asking that opportunities to race is not touched [in the legislature]. We are asking this commission to stay the course with where we are with these types of issues.”