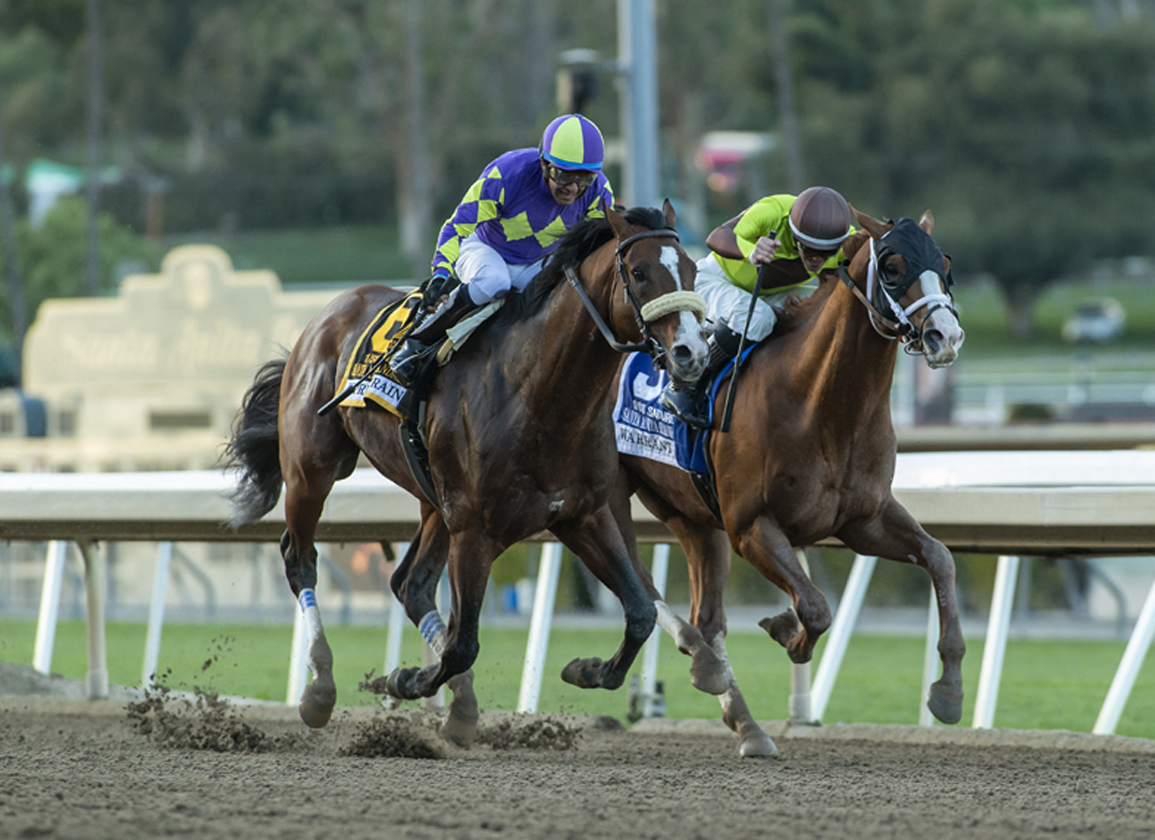 After four Grade I placings in addition to four graded wins, C R K Stable's Express Train (Union Rags) finally got a Grade I to call his own when he captured the Santa Anita H. presented by Yaamava' Resort & Casino in dramatic fashion Saturday. He was also rectifying another overdue omission in giving trainer John Shirreffs, who was nominated to the Hall of Fame this week, his first Big 'Cap win. The victory didn't come easily though, as Express Train had to battle the length of the stretch with Warrant (Constitution) and connections had to sweat out a photo that proved him the winner by a head.

Sent as the even-money favorite, Express Train got clear running right out of the gate, settling about three wide on the outside just a few lengths from the front. The seven-horse field stayed knitted closely together as Spielberg (Union Rags) and American Theorem (American Pharoah) jointly led up front with a first quarter in :23 and a half in :45.97. Express Train began advancing at the half and soon joined Warrant as a mutual third. More prominent going into the turn, Express Train quickened and stayed glued to Warrant, who also accelerated and took the lead. The two came off the turn together with Express Train taking command, but Warrant wasn't done. The two battled stride for stride down the lane, never more than a head apart for the final quarter mile, but it was Express Train who wouldn't be passed in the stretch and crossed the wire a head the best. Hard-trying SW & MGISP Stilleto Boy (Shackleford), who has hit the board behind Life Is Good (Into Mischief), Flightline (Tapit), and Medina Spirit (Protonico) in three of his last four Grade I starts, was nine lengths back in third.

“It feels great,” said Shirreffs. “It's just thrilling, exciting, wonderful. You dream about winning the Santa Anita Handicap and to actually have it happen and with a horse like Express Train, who has done everything [right] along the way. He's made the little steps, the big steps. He participated in all the big races we had on the West Coast and he's been there and shown up. To have him win the Santa Anita Handicap, it's just thrilling.”

On the board in 14 of his 17 lifetime starts, Express Train is unbeaten in two starts this year and has won his last three. He followed up a nose win over Hot Rod Charlie (Oxbow) on Santa Anita's opening day in the GII San Antonio S. with a 3 1/4-length victory in the Feb. 5 GII San Pasqual S. Last year, his wins included another San Pasqual and the GII San Diego H. Although he had not won in three previous 10-furlong tries, including a runner-up finish in last year's Big 'Cap, he came into Saturday's race sharp with that win streak and a five-furlong bullet in :59 1/5 (1/61) Feb. 21. He's only raced in graded stakes since the fall of 2020 and hasn't had a Beyer Speed Figure under 90 since December of 2020, with four triple-digit Beyers.

“Express Train is amazing,” said winning rider Victor Espinoza. “John Shirreffs has done an amazing job with this horse. To be able to keep him on track and train him race by race requires teamwork. John Shirreffs has an amazing team and everyone is important. It makes my job easier when it comes to the race.”

Dixiana Farm bought I'm a Flake, Express Train's dam, for $290,000 at the 2011 Keeneland November sale while in foal to Tiznow. She had two barren years after Express Train, but had a 2020 colt named Union Express (Accelerate) and a 2021 colt by Union Rags. Union Express was a $300,000 Keeneland September purchase by Mayberry Farm, who had purchased Express Train at the same sale in 2018 for $500,000. I'm a Flake was bred to Munnings for this spring. She is out of MGISW November Snow (Storm Cat), who sold at the height of her prowess for $1.75 million while in foal to A.P. Indy and for $100,000 at the 2008 Keeneland January sale while carrying I'm a Flake. November Snow is the granddam of not just Express Train, but also of GI Carter H. winner Morning Line (Tiznow).