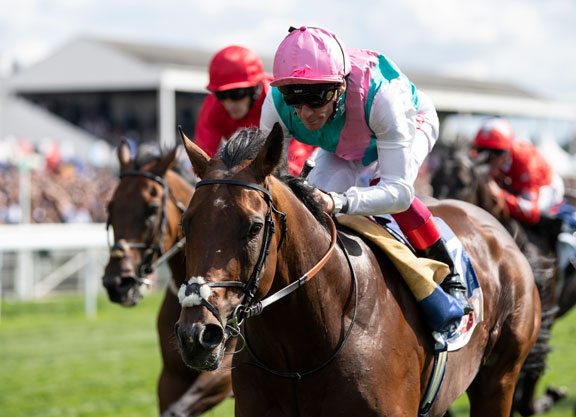 Earning a ticket into the Banstead Manor stallion barn is an advertisement in itself of the quality of a young sire, and Juddmonte's newest recruit Expert Eye (GB) (Acclamation {GB}) is thus far living up to expectations with his first cluster of foals to hit the ground.

The GI Breeders' Cup Mile winner covered a full book of 140 mares in his debut season last year (from 277 applications) at a fee of £20,000, and at this point he has just over 30 foals on the ground.

“Breeders are expressing their delight with the resulting foals,” said Juddmonte's Stallion Nominations Manager Shane Horan. “They are predominantly strong-bodied individuals with attractive heads and an athletic walk, and they are all bay like their sire. This is as good a start as the team at Juddmonte could have hoped for.”

Raced as a homebred by Khalid Abdullah with trainer Sir Michael Stoute, Expert Eye won the G2 Vintage S. by 4 1/2 lengths in his second start at two. He narrowly missed victory in the G3 Greenham S. on debut at three when second by three-quarters of a length to James Garfield (Ire) (Exceed and Excel {Aus}).

Expert Eye tracked Saxon Warrior (Jpn) (Deep Impact {Jpn}) through the opening stages of the G1 2000 Guineas but failed to fire in the closing furlong after being carried out and hampered by the runner-up Tip Two Win (GB) (Dark Angel {Ire}), ultimately checking in 10th. It was a different story at Royal Ascot the following month, however, when Expert Eye posted an eye-catching 4 1/2 length win in the G3 Jersey S. A win over Gordon Lord Byron (Ire) (Byron {GB}) in the G3 City of York S. was bookended by placed efforts in the G1 Sussex S. and G1 Prix du Moulin de Longchamp, and Expert Eye at last got his Grade I at the Breeders' Cup at Churchill Downs.

“I was fortunate enough to attend the 2018 Breeders' Cup at Churchill Downs when Prince Khalid had just the two runners, and both won,” Horan recalled. “Expert Eye reaffirming his place on Juddmonte's stallion roster with victory in the Mile, and Enable creating history by winning the Turf–it was a thrilling day.

“Expert Eye's win in the Vintage S. at Goodwood as a 2-year-old was also something special. We knew everyone at Sir Michael Stoute's yard were excited by him and it was in this race in which Expert Eye exploded onto the scene and made everybody take note. It was still early days, however you could not help but think, 'we might have a stallion prospect here.' Winning at Royal Ascot too was a huge deal and the way he sprinted clear from his rivals in the Jersey S. was devastating.”

Horan added, “A high-class sprinter/miler with top 2-year-old form is arguably the most appealing profile you can have in a stallion prospect in today's marketplace. If you also have a notable pedigree along with the physique to match then you have something very exciting. It is what every stallion farm wants to stand because it is what every breeder wants to breed to. Expert Eye showed himself to be a 2-year-old of exceptional ability and proved it again at three with dominant victories over seven furlongs at Royal Ascot and at York. His trademark acceleration won the day in the Breeders' Cup Mile when coming late to take the prestigious race in the dying strides. Remaining in training as a 4-year-old had been considered as it was felt the horse was only getting better but in terms of timing, his race record and the price range Expert Eye fitted perfectly amongst the current stallion roster at Juddmonte, so the decision was made for him commence stallion duties at Banstead Manor stud ahead of the 2019 breeding season.”

Practically a given considering the program he was bred from, Expert Eye has a stout pedigree behind him, too. His dam, Exemplify (GB) (Dansili {GB}), won on debut at Deauville and is a half-sister to champion 2-year-old filly dual Classic winner Special Duty (GB) (Hennessy). His second dam Quest To Peak (Distant View) is a full-sister to Sightseek who, Horan points out, was Juddmonte's most accomplished mare with seven Grade I wins before Enable came along. They are also a sister to the two-time Grade I winner Tates Creek (Rahy).

Interestingly, Horan points out that Expert Eye's mating was the first time Juddmonte had used Acclamation.

“Needless to say they have availed of his services on numerous occasions since, including returning Exemplify in 2020,” Horan said. “Acclamation is widely respected for his ability to sire speed and class and along with the Group 1 Winners Dark Angel (Ire), Equiano (GB), Aclaim (Ire) and his star filly Marsha (GB), Expert Eye is in good company. Dark Angel and Equiano are both Group 1-producing sires while Aclaim will have his first runners in 2021. It is also worth noting that Dark Angel and Expert Eye are the only Group 1 winners by Acclamation to have won a group race as a 2-year-old while Expert Eye holds the singular distinction of being his only progeny to have won a Group 1 over a mile.”

“Dansili featuring as broodmare sire is another very positive attribute to Expert Eye's pedigree,” Horan added. “Dansili's influence as a broodmare sire continues to have a global impact with 10 Group 1 winners to his name including the last two winners of the Breeders' Cup Mile.”