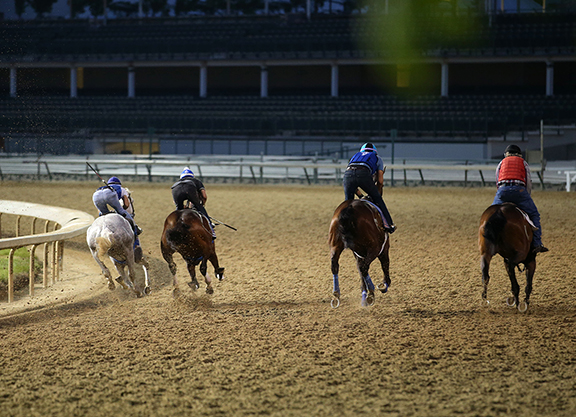 When Lorna Chavez moved from England to the United States in 1995, the land of abundance had a surfeit of skilled participants willing and able to don helmet and boot and join the nation's ranks of exercise riders.

“I started in Delaware,” said Chavez, a former jockey, of her time as an exercise rider for Hall of Fame trainer Jonathan Sheppard. But that was a quarter-century ago. “Now, there aren't enough riders around,” she said. “Especially good ones.”

And that means busy racetracks of a morning are increasingly populated with riders sometimes ill-equipped to helm their equine vehicles–a potential thorn for the other riders on the track, Chavez said. “Some of them are dangerous,” she added. “It's dangerous enough being out there anyway without some of these other riders that are out there. And there aren't any [riders] to replace them.”

The dangers aren't restricted to humans. There's also the cyclical wear-and-tear that bad or inexperienced riders can inflict–the uneven grind on joints from a horse that hangs, or the heavy load on the front legs from an iron-mouthed run-off. The sorts of things that pre-dispose horses to catastrophic injury.

Of course, posterity is a keen advocate for the past, when time can cast history in a rosy glow. But Chavez is far from the only industry figure bemoaning a growing scarcity of talented riders. “It is definitely getting tougher,” said California trainer, Sean McCarthy. “There are lots of reasons for it.”

“Those facilities are disappearing”

One common equation bandied around concerns shifting societal trends and a long-in-effect rural flight: The average American is three generations removed from an agrarian lifestyle.

“That's really the core of it,” said McCarthy. “Kids are not growing up around horses and livestock as they once did, and don't consequently develop an interest in riding–in the States, anyway.”

What's more, many young riders seeking exercise rider positions at the track today “haven't learned to ride properly in the first place,” said McCarthy, pointing to the fundamentals necessary before stirrup-irons can be safely hoisted up and the speed work begins. “In other words, proper equitation and general horse mastership,” he said.

Compounding the problem is a shrinking pool of farms and training centers where young riding talent can be nurtured–a development hitting California especially hard, said McCarthy.

“I think on the East Coast they've got a whole host of training centers that are still active,” he said. And while California used to have a good number of these facilities, too–“especially in the Santa Ynez Valley, across the Central Coast,” McCarthy said–they're disappearing.

“Those were great platforms for kids to get involved in the racing industry, and obviously, learn how to gallop properly from the ground up,” he said. “We don't have that as much any more–that's a big part of it.”

The impacts from this aren't felt uniformly across the board.

“We rarely struggle with exercise riders,” said trainer Mike Stidham. And it's not because he has had to lower his standards.

“We just will not put up with bad exercise riders,” he said. “Whatever it takes, we'll hire the best we can.”

In that regard, what helps, Stidham said, is how larger stables like his have in-built appeal attractive to the more talented riders: Better quality of horse, larger more frequent payment of “stakes,” and assurances of reliable work year-in year-out.

“The smaller trainers with either fewer horses, worse horses, or people who have to rely on freelancers, I think that would be a lot tougher,” Stidham said.

A more intractable problem, he said, concerns the number of riders from Central and South America, and the federal government's hardline immigration policies that are making an already difficult hunt for good riders that much harder.

“Two of my best riders are old,” said Stidham. “They're not going to be doing this forever, and when they go, I'm going to have to find two more to replace them. That's going to be hard,” he added. “The government's making it tough, for sure.”

But the problem as former exercise rider, trainer and jockey Pam Little sees it is one couched upon simple economics, and an evolving job market ever more averse to manual labor–especially when it comes to the American-born workforce.

“Back when I started working in racing, it was always kind of glamorous–they'd put you on a pedestal if you were a good gallop person,” she said, adding how a typical exercise rider's salary was one that could appeal to a broad demographic.

But over the years, Little said, the average exercise rider salary hasn't kept up with inflation and spiking living costs in urban centers, so that the job has become an anachronism with unsociable hours waging a losing battle against an ever-increasing number of other less arduous careers paths.

Indeed, Little admitted that she had steered her own children away from a possible career in racing. “I just didn't want them to have this life,” she said. “It's seven days a week, and there's no getting ahead.”

A bad rider–so the saying goes–can undo in minutes the work of months, if not years.

But as outrider Alan Love Jr. sees it, industry veterans–especially the exercise riders and outriders–are too quick to hoard rather than share their knowledge with the latest generations.

“They want to make them look bad so they lose their jobs so they don't lose their [own] jobs,” said Love, who has been at the job for 16 years.

And it's not just the nuances of navigating the track of a morning–the getting a horse to settle on a long rein, for example, or to properly engage its hind-end–that aren't being passed down, Love said. It's also the subtler diagnostic skills–like accurately pin-pointing lameness–that are becoming a dying art.

“Half these riders couldn't tell you if they were bad or if they were good, front or back,” he said. “Trainer came by, asked his rider one day, 'how did your horse go?' 'Oh, he went good.' Trainer turns around to me: 'that horse is three-legged lame.'”

But education is a two-way street, and patience a virtue.

“A lot of these guys, they don't want to go to the farm and learn how to ride babies before they come to the track,” he said. “They just want to come to the track, get on a horse and gallop around there. It ain't as easy as their friends make it look.”

Nor are trainers immune from criticism.

“Some don't care. As long as they've got a rider, that's all they're happy about,” Love said. “Every track I've been to, I've seen that.”

“The industry itself has never taken the education of racing personnel to be a high priority,” said Reid McClellan, executive director of the national Groom Elite program. As an example, McClellan pointed to a component of the North American Racing Academy that he helped devise focusing on exercise riders.

“If an outrider didn't think an exercise rider was doing good, for example, they could have sent them over there,” said McClellan. But the course was short-lived. “The industry thought it wasn't necessary,” he said.

As farms and training centers continue to disappear, however, training schools, like the British Racing School, profiled in a video series in the TDN last year–could offer an obvious substitute. “It would need to be in one of those areas where there used to be a concentration of horses, and maybe a farm where people are retiring or getting out of the business,” he said.

As for a swifter fix, McClellan believes in comparable pay for comparable experience as an incentive for riders to continue honing their skills.

In other words, the industry broadly needs to figure out a better system of recompense so that the more qualified personnel are more uniformly rewarded the higher dividends–something that currently isn't necessarily the case, McClellan said, pointing to the flat per-horse rates for freelancers.

Towards this end, “owners bear a certain amount of responsibility,” McClellan said. “If a trainer is willing to hire a more qualified exercise rider,” he added, “the owner should be willing to pay the additional cost.”

“That could be a great way to go,” he said, adding that the industry's Off-Track Thoroughbred program is one such pipeline already connecting horseracing to the broader equine community.

In the same vein, the tracks themselves and the community populating them need to be more receptive to fresh faces, said Little. “If a kid came walking through the gate and said, 'I want to learn how to gallop.' What trainer do you know would say, 'sure–I'll take you under my wing and teach you'?” she said.

For sure, a towering mountain range stands between the industry and meaningful redress of the problem. But as 2020 has been the year when established norms have been up-rooted, perhaps the socioeconomic fallout from the coronavirus pandemic can offer a few tentative signs for optimism.

A recent Harris Poll found that that nearly 40% of city dwellers are considering moving out of the city as the coronavirus pandemic rages on, and an op/ed in Progressive Farmer speculated that more young people are considering a return to the family business. Many warn, however, that the racing industry cannot passively sit back and hope.

At the end of the day, the industry needs to engage in a “sharing of ideas,” McClellan said. “And we might have to change the way we do business.”