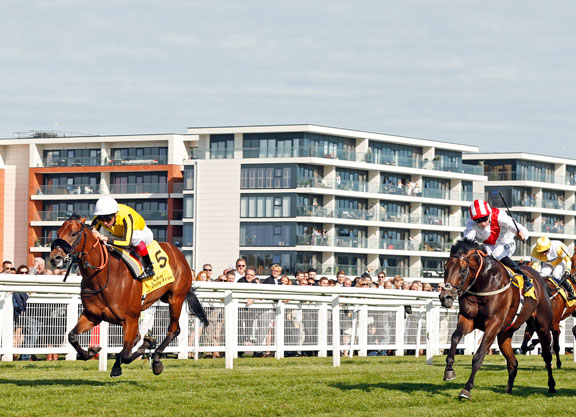 Coming off a debut third over six furlongs at Leicester May 30 to be third in the Listed Windsor Castle S. dropping back to five at Royal Ascot June 20, James Garfield registered a six-length maiden win at this trip at Doncaster July 13 before finishing over five-lengths fourth behind Juddmonte's Expert Eye (GB) (Acclamation {GB}) in the G2 Vintage S. over seven at Goodwood Aug. 1. Staying at that distance and just missing out by a nose to Wells Farhh Go (Ire) (Farhh {GB}) in the G3 Acomb S. at York Aug. 23, the bay gained ample compensation for that eclipse with this first pattern-race success for rookie trainer George Scott. Settled off the pace early by Frankie Dettori, he got first run on the held-up and troubled Invincible Army inside the final furlong and after overwhelming Nebo with 150 yards remaining drew on his extra stamina to set a new juvenile track record. “Congratulations to George and Polly who were married last weekend and he told me after a few glasses of champagne that this horse would win today, so he was spot-on,” the rider said. “He's a bonny horse and we've got to go and take our chance in America now.”

George Scott is tilting at the GI Breeders' Cup Juvenile Turf now and said, “He has danced every dance this year and has been unlucky on several occasions. He has shown it over five, six and seven furlongs now, so he is a pretty versatile horse. He has improved physically the whole time and I am slightly lost for words really. The Breeders' Cup has always been the race we've been wanting to go to. Exceed and Excels have always gone great out there, he has got tactical speed and he will get a tight mile. Since he sat on him at York, Frankie has always been keen to go to the Breeders' Cup. People might think he is just a two-year-old, but he has grown and strengthened and put on plenty of condition. There is no reason why he can't keep progressing. I would imagine he would go for a seven-furlong trial [next year], then we have the two options, we can either go up to a mile or come back to six for the Commonwealth Cup.”

Invincible Army may have been a touch unlucky stuck behind rivals when he needed a run and owner Saeed Manana's racing manager Bruce Raymond was of that opinion. “He was unlucky,” he commented. “It happens and it is not the first time. He ran very well. He is a pretty good horse that tries hard. We are just a bit disappointed.” Charlie Hills said of Nebo, “It was not a good draw and Ryan [Moore] was surprised how well he picked up. He has had a bit of a stop-start preparation, so he has had a nice enough blow. We will probably look to seven furlongs. We will look to go again.”

The winner's dam Whazzat captured the Listed Chesham S. for the Barry Hills stable in these colours in 2004 and produced the dual listed-placed The Shrew (GB) (Dansili {GB}). With a yearling filly by Sea the Stars (Ire) and a colt foal by Golden Horn (GB) to follow, she is a half to the G3 Premio Sergio Cumani scorer Whazzis (GB) (Desert Prince {Ire}) and the dam of the GII Sands Point S. winner and GI Belmont Oaks Invitational S. third Uni (GB) (More Than Ready). The second dam Wosaita is a half to the MGSW Chiang Mai (Ire) (Sadler's Wells), who was later responsible for the G1 Pretty Polly S. winner Chinese White (Ire) (Dalakhani {Ire}), and also the G1 Prix de Diane heroine Rafha (GB) (Kris {GB}) who produced Invincible Spirit (Ire) et al and is the second dam of this year's G2 Superlative S. scorer and leading 2000 Guineas contender Gustav Klimt (Ire) (Galileo {Ire}).