Eternal Peace Proves Worth the Wait 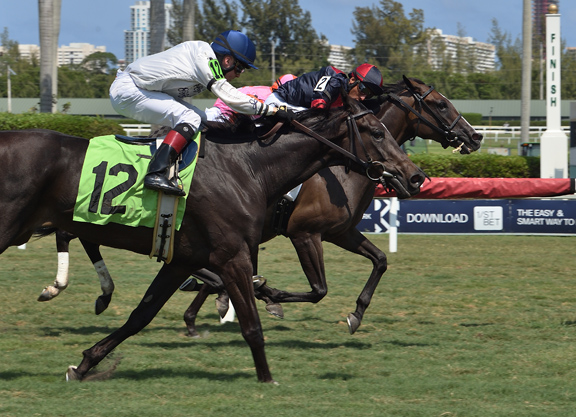 Eternal Peace (War Front), who produced a solid effort to be fifth in her debut at Gulfstream Park last March, didn’t see the racetrack again for another 13 months, but she began to make up for lost time with a determined maiden score in her first start back Sunday at Gulfstream Park for owner/breed Robert ‘Shel’ Evans and trainer Roger Attfield (video). The victory came some seven months after the filly’s full-brother sold to Godolphin for $800,000 at last year’s Keeneland September Yearling Sale.

“She hadn’t run in a year and Roger was a little worried that she might be a bit short,” Evans said Monday. “But he thinks she is a top-class filly. We are excited about her. I just hope there is someplace to run her.”

Evans admitted, with the breeding season in full swing, time was running out to get the filly to the racetrack.

“She had a couple of different issues,” he said. “We weren’t sure she’d get to the races. I think Roger felt some pressure to see if she was as good as he thought she was because the breeding season is here. And I did say, ‘Look, if we aren’t going to race her, I’ve got to breed her. We’ve got to make a decision.’ So it seems like we made the right one.”

He continued, “We knew she had talent. Roger has always been high on her and really liked her. It was just a question of if she’d hold together.”

Asked about her appeal, Evans said succinctly, “I wanted a Galileo mare. Patrick [Lawley-Wakelin] went over and, with Andrew Sime’s help, they picked her out and we bought her.”

Veteran bloodstock agent Patrick Lawley-Wakelin did plenty of research before landing on the then four-year-old mare.

“About seven or eight years ago, Mr. Evans and I discussed the possibility that, to complement his broodmare band, he should have a daughter of Galileo,” Lawley-Wakelin explained. “At that point, I realized, and I am sure a lot of experts realized, that Galileo was just going everywhere and could only go up. We first looked at the possibility of buying a Galileo yearling filly. We went to the sales in Ireland at Goffs and we had gone to the sale in England at Tattersalls, the Book 1 sale. We were trying to look at all the Galileo fillies that were for sale. And we found that they were either going for astronomical money or the pedigree just didn’t seem to suit on the bottom side. We just came away from that not being able to buy anything. So we then concentrated on the Tattersalls December sales.”

Eternal Bounty, third in the 2012 G3 Give Thanks S. for the Coolmore team, immediately looked to fill the bill.

“One of the reasons why I liked Eternal Bounty was that she looked fast,” Lawley-Wakelin said. “She is not a very big mare, a typical Galileo, with a great walk on her. I thought maybe she would be a little early and had a little bit of speed. My very good friend Andrew Sime, who is based in Newmarket, was doing the pedigree side of the deal and we were both looking at all the Galileos-both the yearlings and the mares-and we hit upon Eternal Bounty. She managed to fall into the price range that was acceptable.”

Recalling that purchase six years ago, Evans said with a laugh, “I was actually in an airplane flying to Canada on the phone. It was pretty incredible technology back in 2013 when we were just learning how to do that.”

Eternal Peace is the mare’s third foal, but her first to race.

“She produced a beautiful Invincible Spirit filly [in 2014], but unfortunately she never ran,” Lawley-Wakelin said. “The second foal was a Distorted Humor who was an absolutely beautiful colt. But he got very badly kicked on his tendon, so he didn’t race.”

Evans knew immediately he had a keeper with the mare’s third foal.

“She was a filly that I thought was a very typical War Front,” Lawley-Wakelin said of his initial impressions of Eternal Peace. “There was a lot of her sire in her, beautifully topped with great balance. She was just a lovely filly. As soon as she was foaled, Mr. Evans said, ‘The last thing I’m going to do is sell this filly.'”

Things only got better for the team with the mare’s fourth foal, a son of Claiborne’s super sire War Front, who sold to Godolphin for $800,000 last September.

“He was the most outstanding looking yearling, both in temperament, in the way he held himself and the way he walked,” Lawley-Wakelin said of the now 2-year-old. “I loved him, he was a beautiful foal, turned into a very good-looking weanling, and an even better yearling. He had everything about him that would suggest he would be a good horse.”

Eternal Bounty produced a filly by Quality Road, a stallion bred by Evans’s late brother Ned, in 2019 and was bred back to English Channel. She is due to visit Into Mischief this year.

While Eternal Bounty may be a relatively new addition to his 28-head broodmare band, many in Evans’s band trace back generations, particularly to Classic-winning sire Pleasant Colony who was bred by his father, Thomas Mellon Evans.

In March, the breeder was represented by a pair of maiden-winning fillies from the Christophe Clement barn, with Stop War (War Front) graduating at Tampa Bay Downs Mar. 7 (video), a day after Smack (Super Saver) broke her maiden at Gulfstream Park. Both represent multi-generations of Evans homebreds.

Stop War is a daughter of the unraced Shared Hope (Gone West), who in turn is a daughter of 1993 GI Ruffian H. winner Shared Interest (Pleasant Colony). That mare was produced by the Evans-bred Surgery (Dr. Fager).

Colonial Play is also the dam of Evans’s multiple Grade I winning Marsh Side (Gone West).

Recalling his long and successful association with the 1981 GI Kentucky Derby winner, Evans recalled, “When my father syndicated Pleasant Colony, the syndicate agreement called for him to have to sell 50% of him. He didn’t have takers for all the shares, so he forced my brother and I to buy a share each and then financed us to do it. So I had a share of him for his whole breeding career. And it was a good thing because he was one of the most underrated stallions that’s ever been.”

And generations later, Evans still calls on the stallion for that extra bit of help in races.

“When they come to the top of the stretch, I say, ‘Come on Pleasant Colony, get them home,'” Evans said with a chuckle. “And he usually does.”

Pleasant Colony came through yet again for Evans when he purchased subsequent Classic winner Tonalist (Tapit) privately as a yearling.

“When Mr. Evans bought Tonalist, one of the reasons that was factored into him buying him was that he was out of a Pleasant Colony mare,” Lawley-Wakelin said.

In addition to the 2014 GI Belmont S., Tonalist also won the 2014 and 2015 GI Jockey Club Gold Cups and the 2015 GI Cigar Mile H. He was second in the 2015 GI Met Mile. Now standing at Lane’s End and with his second crop on the track this year, the stallion was represented by a bevy of impressive winners before racing’s lockdown. His daughter Tonalist’s Shape won the GIII Forward Gal S. and GII Davona Dale S., and Alta’s Award was second in the GIII Honeybee S. His son Country Grammar, fifth in the GI Fasig-Tipton Fountain of Youth S., had been expected to start in the GII Wood Memorial before racing was cancelled in New York.

“One thing that we all need to really pay attention to is what [the racing shutdown] is going to do to second-crop sires,” Lawley-Wakelin said. “With only ‘x’ amount of jurisdictions running right now, it’s going to severely hurt a number of these horses. Fortunately, Tonalist’s numbers keep on going up and I think he’s got a healthy book this year even in view of what’s going on. Country Grammar, that was hugely disappointing for us, because I know that that colt was going to go to the Wood. And that obviously hasn’t happened, but there might be a silver lining in that the Kentucky Derby is now in September and that has to play to the favor in a lot of the progeny of Tonalist. He’s proven that he can get them on any surface. I think that he could be an outstanding sire and definitely, value-wise right now, he’s definitely there for that.”

Despite his years’-long passion for racing and breeding, Evans maintains a pragmatic approach to his stable.

“My brother, who was a pretty top-notch breeder, used to say, ‘These are not racehorses, they are trading horses.’ So yes, I’d sell all of them. I would love to make some money and I have too many horses.”

With sales across the country postponed or canceled, trading horses has become even more problematic.

“I had a bunch in the 2-year-old sale in Ocala and I still have them,” Evans said. “I didn’t mean to race them, I would like to sell them. I have a whole bunch of yearlings I would like to sell–in fact, I’ve entered them all in the sale. I would sell them all if somebody would buy them. But they have to have a sale for that to happen.”

With all the uncertainty across the globe, the Evans team can still bask in Eternal Peace’s victory Sunday and look forward hopefully to the possibilities ahead.

“Her winning like that at a mile, I thought showed great determination, the will to win,” Lawley-Wakelin said of Eternal Peace’s maiden score. “I was really impressed with the way she settled, the way she ran and came up through a bunch of horses and just nailed it on the wire. I know that the Honor Code filly [Talking Book] was coming hard, but I know that our filly is very, very game. I think she could have a very good season ahead of her and it would be amazing if she could get some black-type. If she does, I don’t care what economy we are in, she becomes very valuable.”