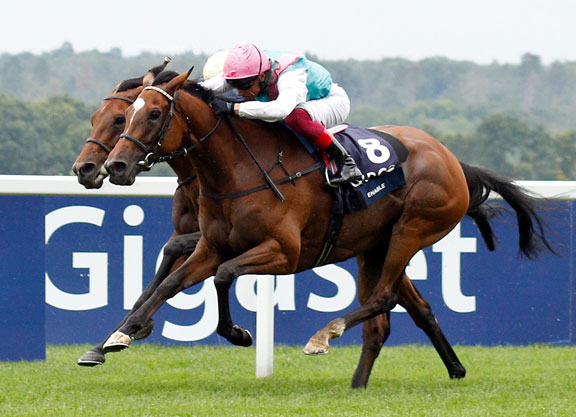 Everybody wanted a great visual outcome to what looked a great race on paper and that is what we all got on Saturday as Enable (GB) (Nathaniel {Ire}) overcame Crystal Ocean (GB) (Sea the Stars {Ire}) in a thrilling tete-a-tete in Ascot's G1 King George VI and Queen Elizabeth Qipco S. Gaining the edge on the Stoute stalwart two out, the heavily-supported 8-15 favourite kept rolling to hold a slim but definite advantage bar a brief period where they came inches closer inside the final furlong. Frankie was just waving his whip at the great mare all the way to the line, where a neck separated them in one of the King Georges to enter into legend. Waldgeist (GB) (Galileo {Ire}) gave ballast to the form, 1 3/4 lengths further back in third, with seven lengths to Salouen (Ire) (Canford Cliffs {Ire}) in fourth and the likes of Anthony Van Dyck (Ire) (Galileo {Ire}) and Defoe (Ire) (Dalakhani {Ire}) soundly beaten. Dettori was just affirming his greatness in a pressure-filled finale that no other jockey would have ridden without applying the whip. “That was the hardest-fought race I've ridden in during my career,” explained the maestro, whose whole life journey seems to have led to this midsummer spell of unparalleled brilliance. This was his ninth group 1 success since Anapurna (GB) (Frankel {GB}) took the Epsom Oaks at the end of May. “I haven't slept for a day and I'm absolutely exhausted, physically and emotionally. She really surprised me today with her will-to-win and courage and she is an amazing horse in every way. I don't know what to say, I love her.”

With significant rain hitting Ascot on Friday night, the ground had shifted to good-to-soft which could only play more to Enable's strengths and the late gamble that had taken place before the July 6 G1 Eclipse S. was played out once again as she prepared for her latest overture. Not as exuberant from her wide stall as she had been in 2017, she was taken back to race in eighth with all inside positions already taken up by her rivals. As expected, Ballydoyle's sheepskin cheekpiece-fitted trio of Norway (Ire) (Galileo {Ire}), Magic Wand (Ire) (Galileo {Ire}) and Hunting Horn (Ire) (Camelot {GB}) forged ahead with Crystal Ocean enjoying the best draft in fourth outside of Anthony Van Dyck.

That G1 Epsom Derby hero was the first under pressure, with Ryan Moore struggling to conjure any of the magic that had seen him claim the latest blue riband and he was beaten before they had reached the half-mile marker. Soon after, James Doyle let out some rein on Crystal Ocean who was travelling with as much purpose as he has ever done and so Frankie was keen to keep the Rothschild silks in plain view. Rounding for home, the horse that he had steered to success in the G1 Prince of Wales's S. looked to be going better but in an instant Dettori employed all of his experience to attack early and from the two-furlong pole the pair propelled each other on with the game Waldgeist in tow. This was no Grundy-Bustino finish with whips flying however, and despite the strenuous efforts of the first and second the winning rider's finesse was always notable.

Dettori was at pains to express how hard it had been for the winner, who led an unprecedented one-two-three-four for the 5-year-olds. “Full credit to Crystal Ocean, he really put it up to me,” he said. “The original plan was to move forward from the start, but Boudot kept me wide [on Waldgeist] and so I took a chance and dropped back. I must admit, on the bad ground in the back straight I wasn't too comfortable. I saw James sitting pretty and going really well, so I had to make a race of it and jump on him. I probably took him by surprise and then the gloves were off.” Doyle said of the runner-up, “He gave it all there. I had a superb trip throughout the race and they went a nice pace. He settled in a lovely position and Frankie said pulling up 'my mare had to dig really deep there'. I headed her for a second, but she just digs into her reserves.”

Now officially the most accomplished racehorse in history in terms of a tally in prestige races, it is ludicrous that Enable gets three pounds from entire horses that she is physically superior to. That is the constant fate of Crystal Ocean, who will go down as one of the best horses not to win this prize but it is debatable whether he would be able to upstage her even if the allowance was ever taken away. Her one blot came when debuting on turf when 2 1/2-lengths third behind stablemate and Frankie's pick Shutter Speed (GB) (Dansili {GB}) in Newbury's Dubai Duty Free Golf World Cup EBF Stallions Conditions S. in April 2017. Were it not for that, there would be a flawlessness to her incredible race record to match the one horse that keeps all others in the shade.

Juddmonte's ability to turn up these machine-like processors of big races without hitch is remarkable and arguably Enable has now placed Khalid Abdullah's operation above all others. She has one more top-level victory to carry out to match the ten of Frankel (GB) and it would be apt were she to do it in York's G1 Juddmonte International that he dominated in such sensational style in 2012. If she makes that Aug. 21 feature of the Ebor meeting, it will be the only race to be graced by both of the great homebreds and then she will be Arc-bound for a third time as she bids to cap it all with a magical exit.

Just a few years after Treve (Fr) (Motivator {GB}), the world has a chance to witness something that may never be matched if she is able to pull off a treble in the French monument. Frankie is making the most of the time he has left on board and said, “I ride her twice a week and she gives me emotions no other horse has given me in my life. We're probably only going to see her twice more, so let's enjoy her.”

What would have been a tactical disaster for most horses was no problem for the gifted mare and her Clarehaven handler was standing back in admiration once again. “The wide draw is never easy here–Frankie was forever trying to get a position where he wasn't three or four-wide and she was ultimately left with a lot to do,” John Gosden said. “The pace was solid and in the end she carried him into the race a little too easily and he was in front a long way out. Crystal Ocean showed all the courage in the world and the first two are wonderful. It was a great King George and while sometimes these races disappoint this was not an anticlimax. Frankie was all hand and heels–I said when he came back in, 'we weren't trying to get handicapped you know!' but he's so fond of her he wanted her to do it within herself.”

York is on the agenda now, in either the G1 Yorkshire Oaks she won in 2017 or the owner-breeder's sponsored race which, Ebor aside, is the real feature race of the meeting next month. “We'll just play with her now, as she is one of those that tells you what to do and let her quietly come along in the next ten days,” Gosden continued. “We'll discuss it all, but she's pencilled in for York in either the Juddmonte International or Yorkshire Oaks, as that gives us a nice six weeks until the Arc. I'm very privileged to have her. It comes with a lot of responsibility and she's very much the people's filly like Pretty Polly was at the turn of the century. It's all about Prince Khalid, who bred her and let her race at five. He had the courage to keep her in training and that's very important for racing.”

Khalid Abdullah's legacy is all over Enable's pedigree, but so is Northern Dancer's as the listed-winning and group-placed dam Concentric (GB) (Sadler's Wells) is crossed with her sire's grandson Nathaniel giving the mare a 3×2 inbreeding to Sadler's Wells. What can be seen in the world outside of the intellectual sphere of breeding racehorses as a weakening influence has actually turned out to be a stroke of pure genius by her owner-breeder. Concentric's daughter Contribution (GB) by Champs Elysees (GB) was runner-up in the G2 Prix de Pomone and her 3-year-old filly Entitle (GB) by Dansili (GB) was second in this year's G3 Musidora S., but it is the Nathaniel factor which has made the vast difference here.