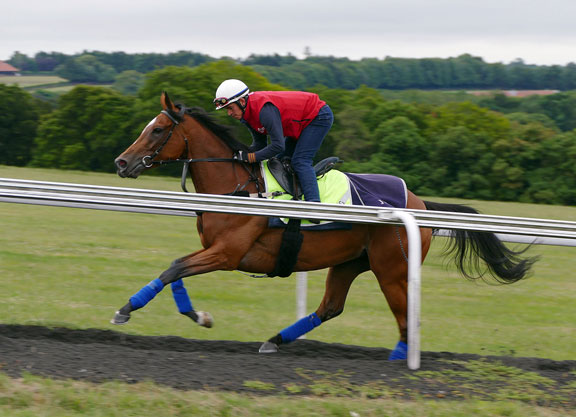 Khalid Abdullah’s Enable (GB) (Nathaniel {Ire}) will bid to break new ground on Saturday in the 70th and certainly one of the strangest editions of the G1 King George VI and Queen Elizabeth QIPCO S. ever witnessed.

Ascot’s midsummer showcase may be lacking in diversity and numbers, even more so after Anthony Van Dyck (Ire) (Galileo {Ire}) was withdrawn Friday, but it will be a fascinating encounter to witness, with the Juddmonte queen looking for an astounding 11th victory at this level. Her Galileo-sired opponents Sovereign (Ire) and Japan (GB) have a mere four successes in this company to boast of between them and regardless of their quality, it will rank as one of the race’s bigger upsets if she surrenders her crown. John Gosden has said it all in the lead-up and it is down to the mare and her greatest admirer Frankie Dettori now.

“She still has that exuberance she had as a 3-year-old, but she is older and has grown a little wiser,” he commented. “I see all of the mental strength and wanting to do it still there with her. She’s more measured about it now, that’s probably the best way of putting it.”

With Sovereign having punished his peers from the front in last year’s G1 Irish Derby on a Curragh track predisposed to bold front-runners, it will be a turn-up if William Buick does not attempt to repeat the antics on Saturday.

In a precursor to the recent Epsom success of Serpentine (Ire) (Galileo {Ire}), the chestnut slammed Anthony Van Dyck by six lengths in that Classic prior to that 2019 G1 Epsom Derby hero running a distant 10th in this contest.

Interestingly, Japan’s sole outing over this track and trip came when winning the G2 King Edward VII S. impressively at last year’s Royal meeting. Only fourth in the June 17 G1 Prince of Wales’s S. on his return to this venue, he improved markedly to finish a head behind Enable when third in the July 5 G1 Eclipse S. at Sandown and it is not implausible that he could have progressed again in the interim. Ryan Moore has picked last year’s G1 Grand Prix de Paris and G1 Juddmonte International winner and he looks Ballydoyle’s closing act in a tactical conundrum.

“Everyone knows that Enable is the one to beat and no one is going to argue that she shouldn’t be a short-priced favourite to win her third King George, which would be some feat and a measure of how good she is,” Moore commented. “Sure, she wasn’t at her best behind Ghaiyyath (Ire) (Dubawi {Ire}) on her return in the Eclipse, but you would have thought they would have been pretty pleased with her there as a 6-year-old having her first start in over nine months. But she has been beaten in her last two starts, time catches up with us all and that gives us all hope, especially when the opposition here is as good as it is. You have a six-length Irish Derby winner in Sovereign, a Derby winner in Anthony Van Dyck, who is very capable, indeed, when getting decent ground and my mount Japan.

He continued, “Japan’s best form to date came in his Juddmonte victory over an extended mile and a quarter, but he clearly gets a mile and a half well and I was very happy with his third in the Eclipse, just a head behind Enable. I’d like to think my horse comes in here with a career-best performance in him after his two runs this season and he has everything in his favour conditions-wise. That may not be good enough if Enable is at the level of her Yorkshire Oaks win last season, but we will give it a go.”

Aidan O’Brien was bullish about Japan’s chances on Friday. “The first day at Ascot, he got upset in the stalls and missed the break, then he got a little tired, but we were happy. We were delighted with him at Sandown and we felt he would progress big time for it,” he said. “Everything about his work since has been very good and we are where we hoped he would be. We always had it in our minds this would be Japan’s first big target. We’ve run lots of horses against Enable but we’re always trying to compete, that’s what everybody loves. It’s great having strong competition, so it’s great Enable is there. It will be Enable and Frankie and Japan and Ryan, so it will be some spectacle. The two horses and the two lads, we’re looking forward to it. The reality is it’s like one of those old matches. It’s on a great track, a stiff mile and a half, so it should be great.”

Elsewhere, Shadwell’s ‘TDN Rising Star‘ Elarqam (GB) (Frankel {GB}) bids for back-to-back wins in the G2 Sky Bet York S. following a failed try at a mile and a half in the Hardwicke. Third and possibly unlucky in the G1 Juddmonte International in August, the 5-year-old appears to appreciate the Knavesmire but has questions to answer after two below-par runs in his last three.

“I would need to go back and have a proper look at what he beat in the race last year, but I know we had Addeybb (Ire) (Pivotal {GB}) a few lengths behind us in second and I’m not sure there’s anything of his quality in the race on Saturday,” Charlie Johnston said. “We obviously didn’t run up to expectations in the Hardwicke. But he lost a shoe and I just think the race went against him–they went hard early and it turned into a war of attrition over a mile and a half, which possibly didn’t suit him.”

Hughie Morrison pitches Castle Down Racing’s Telecaster (GB) (New Approach {Ire}) into battle, with last year’s G2 Dante S. scorer having enjoyed a confidence boost when successful in the G3 La Coupe at ParisLongchamp June 25. Previously, he had been third when Elarqam was runner-up to Lord North (Ire) (Dubawi {Ire}) in the G3 Brigadier Gerard S. at Haydock June 7 and he remains relatively unexposed.

Ascot’s supporting card sees the Listed BetfredTV Pat Eddery S. host a clash between Sheikh Ahmed Al Maktoum’s July 4 Woodcote S. winner Twaasol (GB) (Adaay {Ire}) and Al Shaqab Racing’s June 20 G2 Coventry S. third Saeiqa (GB) (Shalaa {Ire}). Twaasol is trained by Owen Burrows, who said, “We’ve been very happy with him since Epsom and this is the natural progression for him. It looks as if the step up to seven furlongs will suit him. It looks a good race and we should learn a bit more about him, hopefully.”

At Gowran Park, the Listed Irish Stallion Farms EBF Vintage Tipple S. sees the return of a potential star stayer in The Aga Khan’s Kastasa (Ire) (Rock of Gibraltar {Ire}) who signed off 2019 with a seven-length success in The Curragh’s G3 Loughbrown S. in September.

Anthony Van Dyck (Ire), who was to be one of three sons of Galileo (Ire) to tackle two-time defending champion Enable (GB) (Nathaniel {Ire}) in Saturday’s G1 King George VI & Queen Elizabeth Diamond S. at Ascot, has been declared from the race by trainer Aidan O’Brien.

“We weren’t 100 per cent happy with Anthony Van Dyck’s bloods when they came back this evening and as a result we’re not going to run him at Ascot tomorrow. It’s disappointing but we have to do the right thing by the horse.”

The 2016 G1 Investec Derby hero was set to have his third run of the season Saturday, having finished runner-up to Ghaiyyath (Ire) (Dubawi {Ire}) in the G1 Coronation Cup at Newmarket June 5 before finishing a disappointing fifth over unsuitably soft ground in the G2 Hardwicke S. at the Royal meeting two weeks later.