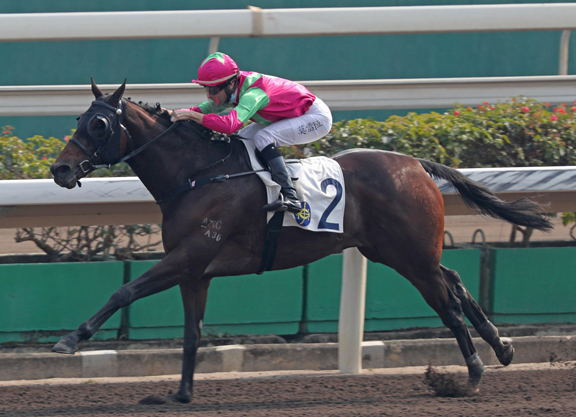 Elusive State (Aus) (All American {Aus}) missed a crack at Dubai World Cup night in 2020 when the meeting was canceled at the 11th hour, owing to the COVID-19 pandemic, but the 7-year-old could take his chance this year following a victory in a rare Class 1 handicap over the Sha Tin all-weather track Sunday afternoon.

Slow to start, Elusive State raced in a share of last into and around the first turn, but was asked to improve by Joao Moreira at the 1100-meter mark and by the end of the next furlong and a half, was alongside favored Kings Shield (Scat Daddy), “giving him the big eyeball,” in the words of commentator Tom Wood. Matching strides on the second turn, Elusive State pressed by the 133-pound top-weight in upper stretch and came home a 1 3/4-length winner (video). The target now becomes Middle East riches, even if Plan A seems to have fallen apart.

“One would have liked to have gone to Saudi Arabia–the Saudi Cup would have been his race over 1800m and that would be the actual race for him,” trainer Tony Millard told the HKJC's Leo Schlink, adding that there are significant obstacles regarding travel from Hong Kong to Riyadh.”

Originally programmed for the G2 Godolphin Mile on World Cup night, Elusive State is now likely for the marquee event following a discussion between Moreira and Millard.

“Quite clearly, he gave them a galloping lesson here today because it (the race pattern) wasn't what we wanted,” Millard said. “On the back of this, we'll be definitely be going for the [G1] World Cup instead of the G2 Godolphin Mile because Joao feels that with him losing his early speed, he reckons that will be the right race for him. I don't think he could have had a better run in than this–I'm quite excited. I think he's going to be a big runner.

Millard added: “It's taken a bit of time to get him back into form. Last year, we had hardly raced him and then with Dubai coming and going (traveling to Dubai before the carnival was abandoned because of COVID-19), it really upset the apple cart. “It's just lovely to have a horse like this and also to have a dream –that's what it's all about.”

Hong Kong's last runner in the World Cup was the Caspar Fownes-trained Gun Pit (Aus) (Dubawi {Ire}), who ran second in the 2016 G1 Al Maktoum Challenge – R3 with Moreira in the irons before finishing tailed off behind California Chrome in the main event.