Elate Doubles Up at Delaware 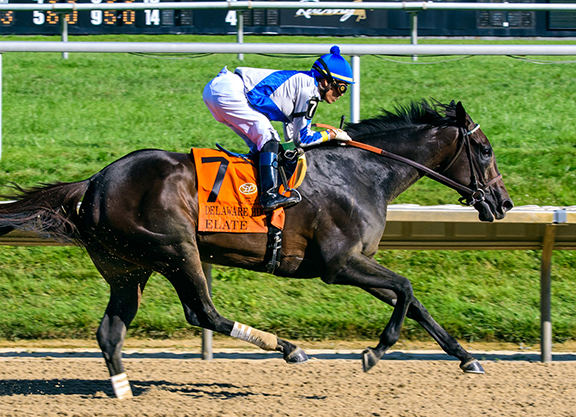 Heavily favored at 1-5 following a strong bounceback performance beneath the lights in the ‘Win and You’re In’ GII Fleur de Lis H. at Churchill Downs June 15, the attractive dark bay broke well from her outside draw and raced in fifth first time past the grandstand. Kept out in the clear throughout, Elate traveled four wide into the backstretch while racing midpack. Jose Ortiz hit the gas as they entered the far turn and Elate made a flashy, sweeping move to stick her head in front leaving the quarter pole. From there, it was just a matter of by how far once they straightened, as she was geared down late as a much-the-best winner.

Hall of Famer Royal Delta, also campaigned by Bill Mott, was the most recent back-to-back winner of this race in 2012-13.

A two-time Grade I winner at three, Elate faced the starter only two times in 2018. She captured this demanding contest in style in her seasonal debut, then was a painful second to champion Abel Tasman (Quality Road) in the GI Personal Ensign S. She was forced to sit out last year’s GI Breeders’ Cup Distaff, a race she finished fourth in the previous year, after popping a splint.

Elate was a bit disappointing in a pair of prior efforts to kick off her 2019 campaign going 1 1/16 miles at Oaklawn, finishing second in the GII Azeri S. Mar. 16 and third in the GI Apple Blossom H. Apr. 14. The winner of both of those races, Midnight Bisou (Midnight Lute), added a jaw-dropping score in the GI Ogden Phipps on the GI Belmont S. undercard.

Two-time Delaware H. victress Elate made it three straight wins in this race for leading sire Medaglia d’Oro, who also sired the popular 2017 heroine Songbird. Stakes winner Cheery produced Elate as the first of her three foals to date, the youngest of which is the unraced juvenile colt Smirk (Blame). Elate shares lineage with GSW Tax (Arch), whose most recent effort was a good fourth in the GI Belmont S., MGSW and MGISP Yell (A.P. Indy) as granddam. Yell hails from one of the most prestigious families in the stud book with Wild Applause (Northern Dancer) as her dam, making Yell a half-sibling to GISW Eastern Echo (Damascus), MGSW Roar (Forty Niner), GSW Blare of Trumpets (Fit to Fight), and the dam of GSW and GISP Congrats (A.P. Indy) and GSP Flatter (A.P. Indy). MGISW New Money Honey was bred on the same Medaglia d’Oro-Distorted Humor cross.