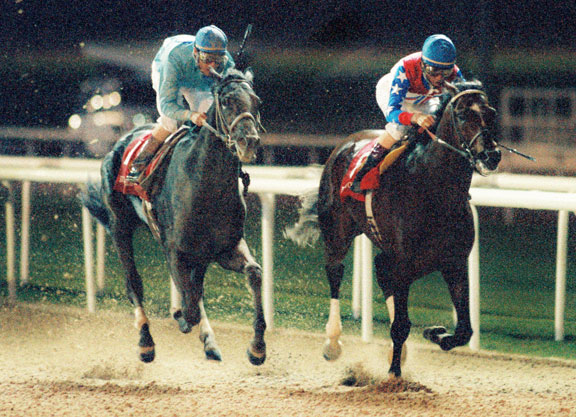 If not for the COVID-19 pandemic, Saturday would have been the 25th renewal of the Dubai World Cup. The iconic 2000-metre dirt race (and for five renewals synthetic) has held sway as the world's richest race for 22 of its 24 renewals, first at Nad Al Sheba and later Meydan, and it has produced some sterling results. The TDN's Tom Frary has paid homage to Dubai Millennium (GB) on the 20th anniversary of his victory, and so with that notable performance aside we look back on some of the other vintage editions.

The 1995 American Horse of the Year Cigar touched down in the Emirates for the inaugural running of the Dubai World Cup with a gargantuan weight of expectation on his shoulders. The Bill Mott trainee had already assured his immortality among the racing annals the previous season, going unbeaten in 10 starts (with a cumulative win streak of 13) and winning eight Grade Is, a feat equaled only by the great mare Lady's Secret in 1986.

As is always the case in horse racing, however, victory was far from assured. Cigar had battled a hoof issue caused by an abscess in the weeks leading up to the World Cup, and persistent rains in the dessert had resulted in a heavy track at Nad Al Sheba, which was already deep and sandy. And-naturally with $4-million on the line-the competition wasn't shabby, either: other top horses from the U.S. (Soul Of The Matter) as well as Europe (Pentire), Japan (Lively Mount) and Australia (Danewin) had all shown up to stake their claim.

Looming ominously without cover just off the pace under regular rider Jerry Bailey in his stars and stripes silks, Cigar cruised up to join the leaders midway around the final turn. He forged to the lead a quarter mile from home but premature celebrations were short lived as Soul Of The Matter closed with gusto, getting to his rival's throat latch. After tussling for a few strides, Cigar shook him off and managed to put three-quarters of a length on him at the line.

Jerry Bailey had made victory in the Dubai World Cup look easy, taking the first two renewals aboard Cigar and Singspiel (Ire), but for the third running it was the turn of his American rival Gary Stevens aboard Silver Charm, the previous season's GI Kentucky Derby and GI Preakness S. winner. And indeed, Silver Charm added yet another dimension to the already storied race; while top older horses from the U.S. and Europe had each had their turn, Silver Charm would become the first Kentucky Derby winner to complete the double-a feat finally matched 15 years later by Animal Kingdom and three years after that by California Chrome.

Breaking a touch slowly from the extreme outside gate, Silver Charm and Gary Stevens sat a length off the pace set by Behrens (Pleasant Colony) and Jerry Bailey, with the previous season's GI King George VI and Queen Elizabeth S. winner Swain (Ire) (Nashwan) and Mick Kinane sitting on their heels. Moving up to test Behrens rounding the final turn, Silver Charm briefly shook off Swain as he swept to the lead in the lane. The race was far from over, however, with the French-trained Loup Sauvage (Riverman) wrestling the lead from Silver Charm on the rail, but the grey was ultra game to claim it back. All the while, Swain's turn of foot had kicked in and he stormed down the middle of the track to ensure a thrilling stretch run right to the end, running Silver Charm to a short head.

In 2002, it was Jerry Bailey once again back in the Nad Al Sheba winner's enclosure, recording his remarkable fourth win in the first seven runnings of the Dubai World Cup, having added the previous year's edition aboard the Bob Baffert-trained Captain Steve (Fly So Free) to his earlier wins with Cigar and Singspiel. It would also be Bailey's last-he retired from race riding four years later.

The mount for that fourth and final win for Bailey in the world's richest race was Godolphin's Street Cry (Ire) (Machiavellian {GB}), and it really was the coming out party for the talented but lightly raced 4-year-old who would win Grade Is on two continents and become a globally influential sire.

Street Cry had established himself one of the top American 2-year-olds of 2000 without winning a stake, although he was beaten narrowly in the GII Del Mar Futurity, GII Norfolk S. and GI Breeders' Cup Juvenile. Turned over to Saeed bin Suroor from California-based trainer Eoin Harty, Street Cry wintered in Dubai and won the UAE 2000 Guineas and was second by a nose on the World Cup card in the G3 UAE Derby. He made just one more start back in New York at the back end of his 3-year-old campaign, but was primed and ready for 2002, winning the G2 Al Maktoum Challenge R3 by 8 1/2 lengths before a similarly dominant 4 1/4 length score in the World Cup from the Argentine champion Sei Mi (Arg) (Potrillazo {Arg}) and the previous season's G1 Prix de l'Arc de Triomphe and G1 Juddmonte International victor Sakhee (Bahri), making it a one-three for Saeed bin Suroor and the third of the trainer's record nine wins in the race. Bin Suroor would also take the world's richest race the following year with Moon Ballad (Ire), who remains the only son of a prior winner (Singspiel) to win the Dubai World Cup.

Street Cry would run twice more, winning the GI Stephen Foster at Churchill Downs and finishing second in the GI Whitney H. at Saratoga before retiring to Jonabell Farm.

The late-developing Pleasantly Perfect (Pleasant Colony) was a surprise 14-1 winner of the 2003 GI Breeders' Cup Classic over the Bobby Frankel-trained star Medaglia d'Oro (El Prado {Ire}), and Pleasantly Perfect-trained by the popular Richard Mandella-would prove that result was no fluke, against besting that rival in a titanic battle in the 2004 Dubai World Cup.

An Argentine-bred, Uruguyan and American champion owned by an Emirati and trained by a Kentuckian turned New Yorker, Invasor really was a horse for all the world. His ascent from his foundations in South America to win five Grade Is in the U.S., including the Breeders' Cup Classic and earning a Horse of the Year statuette is remarkable enough, but he solidified his status with a Group 1 win on a third continent in the 2007 Dubai World Cup for owner Sheikh Hamdan and trainer Kiaran McLaughlin.

Traveling prominently and wide throughout, Invasor was given a real test in the straight by the pacesetting Premium Tap, who refused to fold until well inside the final furlong, but the champ's reserves kicked in in the dying strides and he hit the wire 1 3/4 lengths to the good under wraps. McLaughlin, who had spent 10 years wintering in Dubai training for the Maktoum family and who had been champion trainer at Nad Al Sheba three times, has never hidden his deep respect and admiration of Sheikh Hamdan, so one can imagine this must count near the top of his many significant wins.

Like Cigar and Invasor, Curlin came into the Dubai World Cup with an already towering reputation as the reigning Breeders' Cup Classic winner and Horse of the Year. Trainer Steve Asmussen took the pioneering decision of shipping Curlin over a month early and prepping him in a course and distance handicap (now known as the Listed Curlin S.), which he won by 2 1/4 lengths. So that was one unknown element brushed aside, but the competition was of course much fiercer on the big night, and as it would turn out two future World Cup winners finished behind Curlin that night.

With the next year's winner Well Armed setting the pace, Curlin was a formidable presence a half-length away in third on the outside, galloping along with his head slightly cocked as if eyeballing his rivals. Curlin needed only minimal urging by Robby Albarado to overtake the front runners and sweep to the lead in the straight, winning by 7 3/4 lengths in one of the most dominant performances the race had yet seen.

The rags to riches Kentucky Derby and Preakness winner California Chrome (Lucky Pulpit) had been favoured to sweep the 2015 Dubai World Cup as a 4-year-old, only to be run down by the locally trained Prince Bishop (Ire) (Dubawi {Ire}) after traveling wide throughout. Things didn't exactly go to plan for the chestnut thereafter, with injury derailing the rest of that campaign, and he was back under the lights at Meydan just two starts later off a win in the same race Curlin had prepped in. And this time he wouldn't be denied.

Hustled by Victor Espinoza to once again race wide and close to the pace, California Chrome hit the front in the middle of the track at the top of the lane, but this time there was no one to threaten him. Just as it looked as if his connections' long time dream would be realized, a tack malfunction threatened to dash their dreams yet again, his saddle slipping dangerously inside the final furlong. Espinoza managed to hold it together, however, with Chrome crossing the line with his girth nearly at his flank.

Off a defeat of California Chrome in the 2016 GI Breeders' Cup Classic and the inaugural GI Pegasus World Cup, the lightly raced Arrogate came into the 2017 Dubai World Cup hyped as not only the horse of a generation, but as one of the potential greats of the American sport. And he certainly delivered in producing what is considered by many the most dramatic and impressive Dubai World Cup win yet.

A horse who liked to be on or near the lead, Arrogate appeared to have all chance blown when squeezed badly leaving the gate, stumbling and dropping back to dead last. Even trainer Bob Baffert had said, at that point, he thought it was all over.

Showing the cool character that makes him one of America's all-time great riders, Mike Smith let Arrogate gradually glide up on the outside down the backstretch. As they turned into the final bend Smith opted to save some ground and ride for luck, weaving between rivals and gradually picking them off. Switching back to the three path approaching the quarter pole, Arrogate was rolling, with the leading Gun Runner-who would be named the American Horse of the Year at the end of his campaign-firmly in his sights as they straightened. Arrogate needed just a pair of flicks of the whip to overwhelm Gun Runner, swallowing him up in a matter of strides and drawing clear to win by 2 1/4 lengths in an absolutely sublime effort. After the race, Baffert described Arrogate as the best he had ever trained.