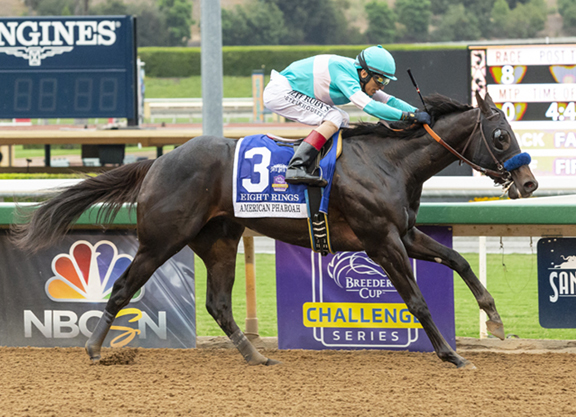 Grade I winner Eight Rings (Empire Maker), originally expected to make his next start in Saturday's GII Los Alamitos Futurity, will skip the 1 1/16-mile race and will instead point towards the Feb. 9 GII San Vicente S., trainer Bob Baffert confirmed to TDN Tuesday. Baffert said the timing of the San Vicente would be better for the talented 2-year-old.

Eight Rings, tabbed a 'TDN Rising Star' following his debut win at Del Mar in August, ducked in and lost the rider at the break of the Sept. 2 GI Del Mar Futurity, but made amends with a dominating victory in the Sept. 27 GI American Pharoah S. He tired to sixth in the Nov. 1 GI Breeders' Cup Juvenile last time out. The juvenile most recently worked five furlongs in 1:00.00 (3/46) at Santa Anita Sunday.