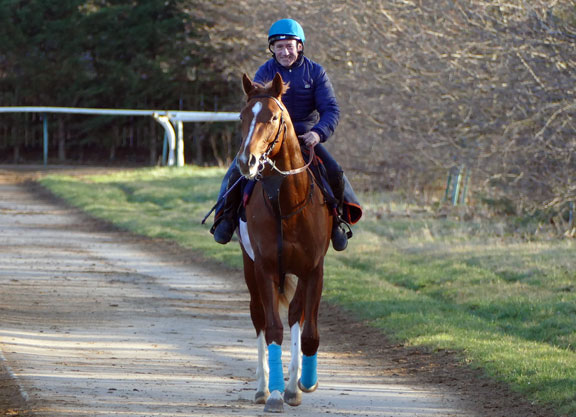 A feature of the European breeze-up sales over the last decade has been the rise in the number of juveniles by American stallions. Success begets success, as the saying goes, and as sires such as War Front and Speightstown have demonstrated their versatility for producing runners who are effective on both turf and dirt, so the clamour for American stock has grown.

Both the above-named proven stallions feature in the draft of six horses to be offered by Newmarket-based Alliance Bloodstock at the Tattersalls Craven Sale this April. But it's likely that the 2-year-old who will garner the most attention among the sextet is the colt catalogued as lot 29, a masculine chestnut son of American Pharoah and the unraced Storm Cat mare Wile Cat. The half-brother to the G3 Sirenia S. winner and G2 Queen Mary S. runner-up Shumoos (Distorted Humor) is the sole colt from the first crop of the Triple Crown winner in the Craven catalogue and, since being bought from Keeneland's September Sale for $375,000, has been preparing for his next sale appearance not much more than a stone's throw from where he will be asked to post his first professional blast down a racecourse.

The man charged with putting him through his daily paces is jockey John Egan, who selected the colt in Kentucky with partner Eimear Donnelly and Timeform expert Dominic Finn on behalf of Christopher Brennan. Now 50, Egan still rides like a man half his age, and in fact he often finds himself competing against his son, the champion apprentice of 2017, David Egan, who recently rode his first winner in America. With Egan junior having just returned from the U.S. to resume his association with trainer Roger Varian, he has also been helping his father prepare eight breezers–another American Pharoah colt will head for the Guineas sale–along with fellow jockey Josephine Gordon.

John Egan thoroughly enjoys his visits to Lexington in September and last year also brought home a son of War Front whose pedigree is instantly recognisable in Europe. The tall, dark brown colt (lot 139) is out of the former champion 2-year-old filly and dual Oaks runner-up Quarter Moon (Ire) (Sadler's Wells). Not only is the colt bred on the same cross as Kentucky Derby hopeful War Of Will–a graduate of Arqana's breeze-up sale last year–but he is from a family which produces classy turf runners with metronomic frequency. His half-sister, the G1 Pretty Polly S. winner Diamondsandrubies (Ire) (Fastnet Rock {Aus}) and Eminent (Ire) (Frankel {GB}), out of another half-sister You'll Be Mine (Kingmambo), are just two recent examples.

“I've been lucky over the years in America,” Egan says from his sunfilled tack room between riding the American Pharoah and War Front colts.

“Luckily there's a big, big pool to fish out of over there. Obviously you need luck at the end of the day, but if you study as hard as you can, put the groundwork in, it increases the chances of having a bit of luck, doesn't it?”

A man rarely without an impish grin on his face, the jockey has plenty to smile about this bright but bitterly cold March morning. The American Pharoah colt is pleasing him in both performance and attitude, and the youngster's ability to stroll around a bustling part of Newmarket's training grounds, taking in his surroundings with the measured calm of a much more seasoned horse, will doubtless stand him in good stead come sales time. Appearing at Tattersalls may be easier for him and his draft mates than others, however, as it is but a short walk from where they are stabled to the breeze strip alongside the Rowley Mile straight.

“American Pharoah was an unbelievable racehorse to do what he did. I've spoken to a few American trainers since I bought him and it seems the one thing that the American Pharoahs have is very good minds. He clearly has it, he's a dude. He went on his own from the first day riding, and he's never ever left an oat, not one day that he's been here.”

He continues, “I haven't started galloping yet. These horses are very comfortable because I get them ready as if I'm going to be training them to race. I'm not thinking about doing a time up there, which I think is ridiculous to be honest. The ones that are revved up to do the times, it takes six months to unwind them. I like them to just come up there and do a nice breeze in a reasonably nice time. It's not really about those two furlongs, it's about how they gallop out, how they move.”

As well as his many years race-riding, Egan knows a thing or two about getting it right for a crucial breeze.

“I first rode in the breeze-ups at Ascot in 1983,” recalls the Irishman. “I went over with my father and Bobby O'Ryan and we brought a lorry-load from Mick O'Toole's. So I've been doing the breeze-ups from a young age and I like to see a horse do a nice progressive breeze, like you hope he'll be in a race, steadily working his way into it.”

Also plucked from Keeneland September was an Uncle Mo filly (lot 57) whose dam Cherokee (Storm Cat) won the G3 Go And Go S. for Aidan O'Brien at two, while the Speightstown filly in the draft was foaled in Ireland and bought at Tattersalls last October for 100,000gns. The first foal of the stakes-placed Kodiva (Ire) (Kodiac {GB}) (lot 105) is a grand-daughter of Sheikh Mohammed's top-class 2-year-old Negligent (Ire) (Ahonoora {GB}), from the family of 1000 Guineas winner Sky Lantern (Ire) (Red Clubs {Ire}).

The Craven draft is completed by two homebreds from Khalid Rahim's Friarstown Stud in Kildare, where Egan was previously based. Both fillies, the first is by Oasis Dream (GB) out of the GI EP Taylor S. winner Lahaleeb (Ire) (Redback {Ire}) (lot 112), while three lots later (lot 115) will come a first-crop daughter of Darley's Golden Horn (GB). She is another with a pedigree to recommend her to buyers from both sides of the Atlantic as she is out of the treble winner and Grade II-placed Los Ojitos (Mr Greeley).

As the days pass until the wraps come off the first consignment in the name of Alliance Bloodstock, Egan credits Donnelly, who spent time working for trainer Martin Brassil in Ireland and still rides out in Newmarket, with running the show behind the scenes.

He says, “Eimear does everything really. There's a lot of paperwork nowadays, especially with importing horses. She's the one who deals with shipping agents, feed merchants, vaccinations, vets, catalogue updates, you name it.”

He adds, “Dominic Finn helps us a lot as well. He works for Timeform and helps us especially when buying our form horses. He'll spot good sectionals and whether a horse is progressing rather than going downhill. The catalogues are that big now in America, there's thousands of horses. You need a few people over there to do the barns.”

In many ways the Alliance Bloodstock draft is representative of the increasingly international nature of the bloodstock world, not just the breeze-up sales, with horses of a more traditionally dirt background being welcomed in Europe just as much as the turf horses are having their day in America.

“I think the summers are changing for us,” Says Egan. “We're having a lot more quick ground and the American stallions have got a lot of pace. You get nice horses here as well of course. There's a big cross route at the moment. It's like jumping on the bus now for a horse to go from America to England. The world is so small now. Really, I almost don't think you can say it's an American horse or a European, I think we're all one nearly.”