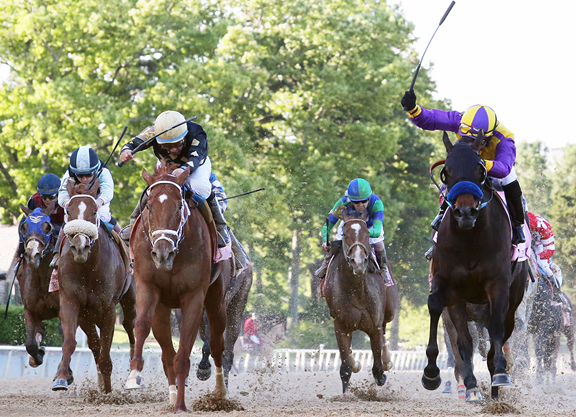 The pickings are reasonably slim during this period of virus-restricted racing, but horses carrying the silks of Aron Wellman's Eclipse Thoroughbred Partners have prospered in recent weeks at Oaklawn Park, with placings in some of the tracks major stakes events.

The suddenly fragmented Racing Festival of the South kicked off Apr. 18 with the running of the GIII Count Fleet Sprint H., won for the third time by Whitmore (Pleasantly Perfect), and the GI Apple Blossom H. Apr. 18. Eclipse's Point of Honor (Curlin), wide-trip winner of the GII Black-Eyed Susan S. and placed in the GI CCA Oaks and GI Alabama S. in 2019, covered herself in glory in the latter event with a fast-finishing third to California-based Ce Ce (Elusive Quality) and Ollie's Candy (Candy Ride {Arg}).

“We were very pleased with her effort. Arguably it was the best race of her career,” Wellman commented. “She didn't come out of there as cleanly and sharply as we might have liked, she kind of got pinched by her rivals to the inside and outside of her. Obviously the pace was conducive to being able to close into, but at the same time, I think the racetrack surface itself was playing advantageous to inside speed on the rest of the card.”

He continued, “So while the speed was fast, I thought the track bias was working against her big time. But no real excuses, the top two fillies are bonafide Grade I fillies. Ollie's Candy ran unbelievably well to take all the heat and only get beat at the wire. Ce Ce is a stellar filly that I have watched develop for Michael McCarthy since the day she came into the barn. I've always known how good she could be.”

“She arrived in good condition, sound and bright,” Wellman reported. “With no firm target on the calendar to point for, we're just going to let her catch her breath and rejuvenate from a very hard race. She had to run really hard and we've always been very generous with the spacing of her races. Now we've got nothing to aim for, so I think the key is to get her energy level back up to a peak. She's a filly that doesn't require excessive training, she's not an explosive work filly.”

While the operation's marquee distaffer has no immediate objective, Eclipse, Chrysalis Stables and Robert LaPenta's the Todd Pletcher-conditioned Farmington Road (Quality Road) has the May 2 GI Arkansas Derby on his dance card courtesy of a strong runner-up effort in the Oaklawn S., a track-and-distance prep for the main event Apr. 11.

“He's a horse that from the day he came into Todd's barn, he was going to be one that would appreciate stretching out to two turns–nine furlongs and beyond,” Wellman said. “We really used an old-school approach to his development. We gave him a race first time out going three-quarters at Belmont, he took a lot of dirt and got a good education out of it and ran acceptable fifth at a distance we knew was going to be too short for him.”

“We stepped him up through a gradual progression in terms of distance and we hand-picked a spot for him at Tampa around two turns and he ran a very credible race breaking his maiden,” Wellman said, referring to Farmington Road's 1 3/4-length graduation at 1-5 Jan. 12. “We weren't shy about getting aggressive about his campaign after that. We sent him to Louisiana for the GII Risen Star S. and he ran a sneaky good fourth in the faster division and was drawn very wide and had a wide trip against an inside speed bias. He didn't draw into the Louisiana Derby and we were really forced to sit on him for a few months. As Todd said, 'Note to self: don't send a good 3-year-old colt to break his maiden at Tampa for such a small purse if there's ever another pandemic,'” Wellman said with a laugh.

Drawn 12 of 13 in the Oaklawn S., he trailed for the opening half-mile before turning in a stinging stretch rally to finish a half-length adrift of Mr. Big News (Giant's Causeway).

“We are fortunate and grateful to Oaklawn for staying open and putting on the Oaklawn S. and he ran dynamite,” Wellman said. “He did everything but win the race and he certainly lost nothing in defeat and continued to validate the notion that nine furlongs and beyond was going to be his strong suit. We decided to keep him at Oaklawn. By all accounts, his energy has been very good.”

Farmington Road, who will be ridden by Javier Castellano from gate 10 in Saturday's second division of the GI Arkansas Derby, went a maintenance half-mile in :51.20 (72/83) over the Oaklawn main track Apr. 24.