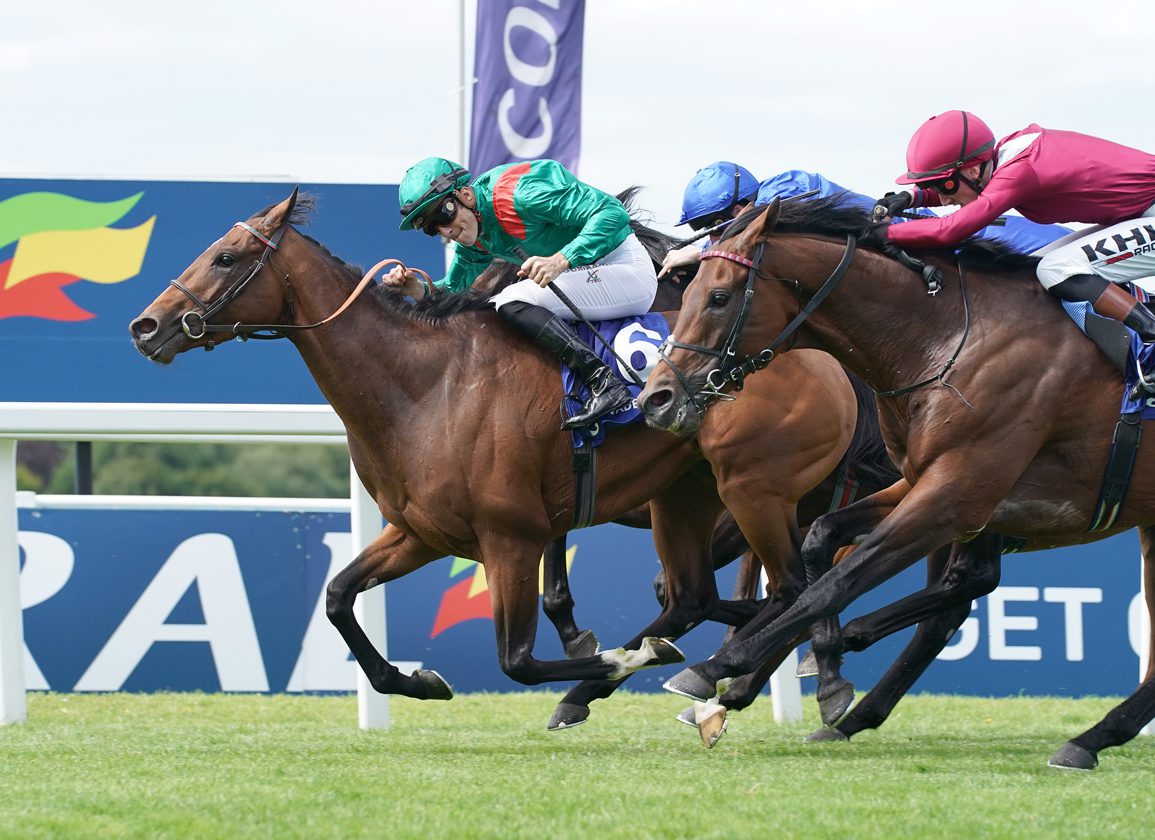 Delivered by fate to coincide with the centennial year of The Aga Khan's Studs, the Jean-Claude Rouget-trained Vadeni (Fr) (Churchill {Ire}) descended on Sandown on Saturday to mark the occasion by providing his owner-breeder with a landmark first G1 Coral-Eclipse S. success. In the kind of tight finale that could comfortably have been predicted given the highly-competitive nature of this year's renewal, the Prix du Jockey Club hero held a fast-diminishing neck margin over the arguably unlucky Mishriff (Ire) (Make Believe {GB}), with the race's other 3-year-old Native Trail (GB) (Oasis Dream {GB}) a further head away in third and Lord North (Ire) (Dubawi {Ire}) only half a length behind in a four-way go. “It is always a real challenge coming to England and not easy for us, so this is a good day,” Rouget commented.

While Christophe Soumillon can be commended for his in-race tactics more than for his immediate celebrations which almost led to Lord North being brought down, this much-vaunted Eclipse was run as a typically “French” affair with steady fractions and a two-furlong sprint. Vadeni, who drifted markedly to 11-4 second favouritism as all the money flooded in for the ultimately disappointing 9-4 market-leader Bay Bridge (GB) (New Bay {GB}), was anchored last of the six early with Alenquer (Fr) (Adlerflug {Ger}) sent on and Bay Bridge in close attendance. Whether by accident or design, Tom Marquand was not making it a true test on the Haggas runner which played against the slow-starting Mishriff and by the time Vadeni was being primed by Soumillon three out the screw was really being turned.

Strangely, a furlong later Bay Bridge who had been so impressive over this course and distance in the Brigadier Gerard was sending out all the wrong signals and his demise meant that Mishriff was caught between him and Native Trail while Vadeni was enjoying a clear passage being slung-shot down the outer to take command approaching the furlong pole. Having been level with the French raider two out, the Gosdens' international star found himself two lengths adrift with a furlong to run and despite his surge cutting back most of the deficit it was not enough.

Vadeni, who made his debut at La Teste de Buch last July, is also the winner of the Listed Criterium du Fonds Europeen de l'Elevage and G3 Prix de Guiche with tactics probably at play in his defeats in the G3 Prix de Conde and G3 Prix de Fontainebleau. Clearly now a colt come of age, Rouget explained that he had forced their hand to launch this audacious raid. “The horse was very well after the Jockey Club and it was too long to wait until the Irish Champion, he has the action of a good-ground horse and we had confidence in him,” he said. “It was maybe less of a fast pace than usual and everyone had their chance at the top of the straight. We decided to have him behind and not put the horse into the fight too early to preserve his acceleration. It will be the Irish Champion next and then either Ascot [for the Champion S.] or the Arc. We don't know, but for me he is a typical mile and a quarter horse.”

Soumillon, who was later handed a 12-day ban July 16-27 with his celebrations causing Vadeni to lurch towards the rail past the line and create a concertina which almost led to Lord North being brought down, was content that the run of the race put the winner firmly in his comfort zone. “The pace was just fine–for my horse everything was perfect,” he said. “He was really relaxed. He changed legs perfectly everywhere I wanted and when I came out of the turn, the pace picked up and for like 50 or 100 yards he was a bit off the bridle, so I had to give him a chance.”

“When he just went up that small uphill at the two-furlong maker, he just took me on the bridle and changed legs,” he added. “That was at the point where I was thinking 'should I wait a bit more?' but I saw Mishriff on my inside had been completely stopped and I just let him go. That is why I came maybe 50 or 100 yards too early to hit the front and unfortunately maybe 100 yards from the line, he stumbled and lost balance for a few strides so I was asking 'please don't give up, keep going' but he gives you a gear like champions can. When I passed the line I didn't see William and James on my inside and my horse just shifted to take the corner. Unfortunately they had to check both their horses quite badly and like I said to the stewards that is my fault. I shouldn't have first celebrated like that and I should have looked to my inside to make sure I hadn't put them in trouble at that point.”

Thady Gosden said of the G1 Juddmonte International, G1 Saudi Cup and G1 Dubai Sheema Classic winner, whose run through the race is certain to be the subject of much discussion for some time, “Mishriff has run a great race. He just missed the break and the plan was to follow Bay Bridge, which meant we wound up on the inside. David has done everything right and I am thrilled with the horse. Three-year-olds get a lot of weight at this time of year and so to split two of the star three-year-olds of this season is a great performance. I think we will now be looking at going back to York with him for the Juddmonte International and we could also look at the King George for him. Lord North also ran a good race. He just got squeezed up a bit, but has still run well.”

Charlie Appleby was delighted with Native Trail and said, “William said he had no excuses. He felt he was in the right position and the horse was comfortable throughout the race and over the trip. He said he saw it out, but take nothing away from the winner and the eventual second. That was a strong event and it was always going to be a tight finish. I don't think you were ever going to see a horse win by a couple of lengths. I posed the question 'do we come back to a mile?' but he said he is comfortable at that and I see no reason why we don't stay at a mile and a quarter. That might give him a few more options. Maybe on a slicker track where they go a better gallop it might just suit him.”