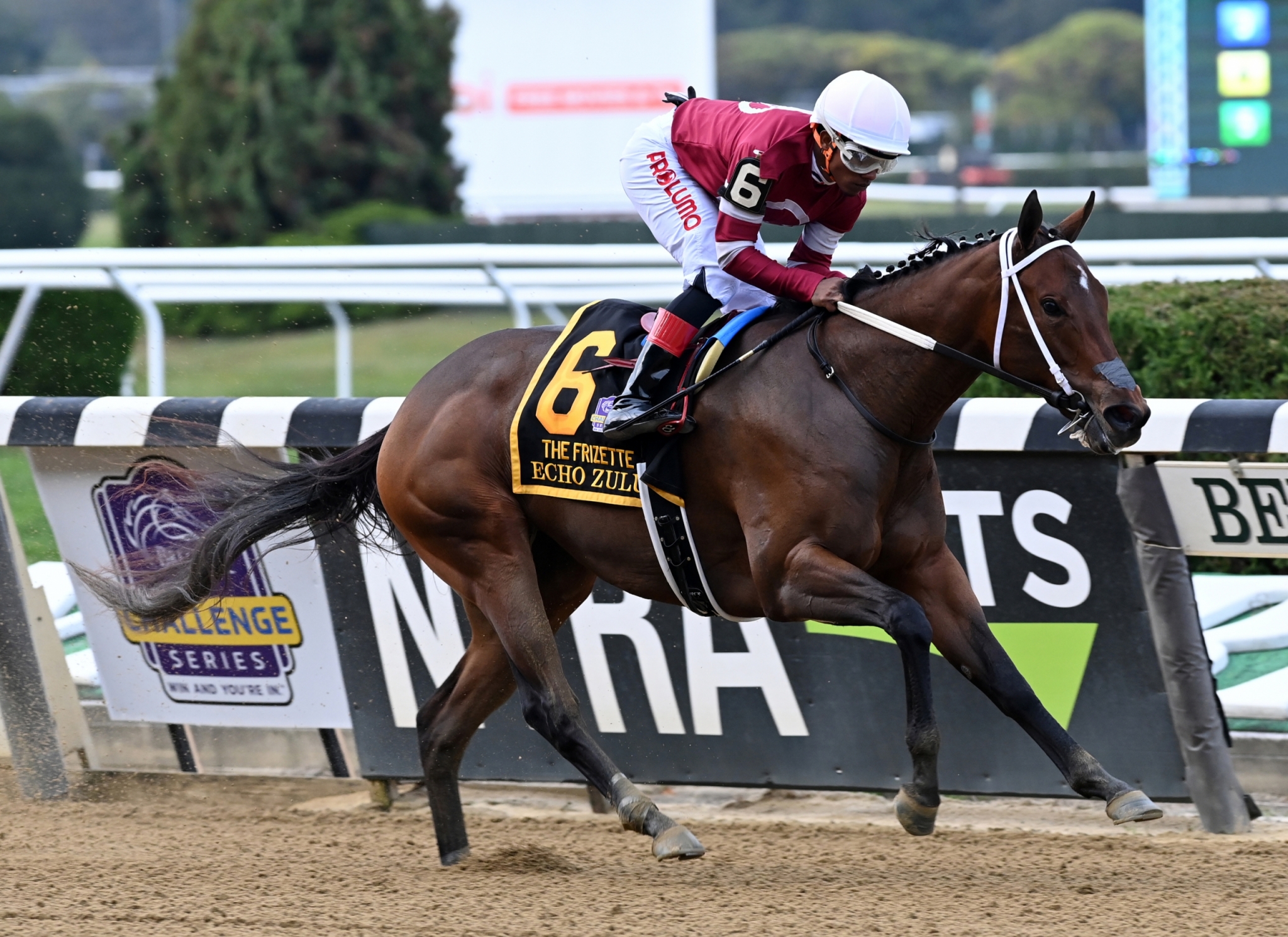 There have been other impressive performances turned in by 2-year-old fillies in recent weeks (namely Hidden Connection {Connect}  in the GIII Pocahontas S. and Ain't Easy {Into Mischief} in the GII FrontRunner S.), but 'TDN Rising Star' Echo Zulu (Gun Runner) reaffirmed her spot at the top of the division Sunday as she blew away her competition in Belmont's GI Frizette S., a “Win and You're In” qualifier for the GI Breeders' Cup Juvenile Fillies Nov. 5 at Del Mar.

The L and N Racing and Winchell Thoroughbreds colorbearer was a 5 1/2-length debut winner over a field that included subsequent two-time Florida-bred stakes dominator Outfoxed (Valiant Minister) on opening day at Saratoga July 15–good for a very strong 92 Beyer Speed Figure. She made similarly short work of the GI Spinaway S. at Saratoga Sept. 5, contributing to a highly memorable meet for her connections that got even better when Gunite closed things out with a win in the GI Champagne S. to complete an unprecedented double for freshman sire Gun Runner (Candy Ride {Arg}).

Backed at 35 cents on the dollar to carry her brilliance over an additional furlong Sunday, Echo Zulu wasted no time taking command as Brown/Klaravich representative Gerrymander (Into Mischief) applied some pressure through splits of :22.94 and :46.37 (according to Trakus). There was a brief moment midway around the turn when Echo Zulu looked like she might let her competition into the race, but as soon as her nose pointed for home, she slammed the door. Ricardo Santana, Jr. hit the gas, and she poured it on at will, running the score up to 7 1/4 lengths from the staying-on Gerrymander. Maiden A Mo Reay (Uncle Mo) came out on top of a blanket finish for third.

“It's amazing. She's a special filly and she's by Gun Runner. How much better can it get? She's better than good,” said all-time winningest trainer Steve Asmussen. “She's a Spinaway and a Frizette winner. That's elite company. I'm proud of her. Good energy though the wire. She didn't stagger in there and she set honest fractions.”

The Hall of Fame trainer had won the Frizette three times previously, perhaps most notably in 2011 with the similarly brilliant My Miss Aurelia (Smart Strike), who subsequently ran to favoritism at the Breeders' Cup to lock up an Eclipse Award.

“The filly obviously has a tremendous amount of ability and I think the big jump is to get to this level,” said Asmussen when asked about the upcoming two-turn test at Del Mar. “The Spinaway and the Frizette –that sort of foundation and doing it multiple times gives you a tremendous amount of confidence. My worry was the Spinaway off one 5 1/2-furlong race with the [lack of] seasoning. The Spinaway and Frizette have eased all those tensions, now it's just up to how fast everybody is.”

Santana added, “She's special. She broke her maiden and we never expected she was ready first time out in Saratoga. How she did it [shows] she has some ability and she proved it today… She broke good and was waiting for the company. When the company got to her, she took off again. She's really special.”

Echo Zulu's dam was talented herself, winning by 5 1/2 lengths in her Calder debut as a newly turned 3-year-old and streaking to three-for-three in the 2005 GII Forward Gal S. L and N Racing and Asmussen campaigned Letgomyecho's son Echo Town, who took last term's GI H. Allen Jerkens S. and completed his first season at Coolmore's Ashford Stud this year. Echo Zulu's yearling half-sister was also extremely popular at Keeneland September–she topped the first session of the sale on a $1.4-million bid made on behalf of Joe Allen. Ron Winchell bought the second topper that day. Click here for more.