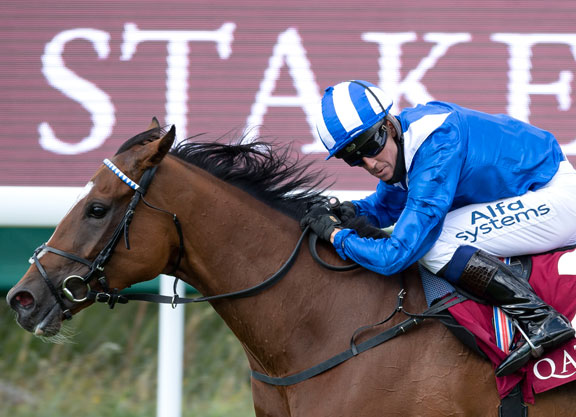 With Manuela de Vega (Ire) (Lope de Vega {Ire}) ruled out of Saturday’s G2 Qatar Lillie Langtry S. at Goodwood, the way was paved for last year’s winner Enbihaar (Ire) (Redoute’s Choice {Aus}) to enjoy a saunter around the Downs and she duly delivered with the minimum of fuss against two rivals. Last seen finishing fourth in the 12-furlong G2 Princess of Wales’s S. on her seasonal bow at Newmarket July 9, Shadwell’s 1-2 favourite stayed close to the 3-year-old Snow (Ire) (Galileo {Ire}) throughout the early stages and once sent past that rival passing the two-furlong pole drew away strongly to score by 3 1/2 lengths from Cabaletta (GB) (Mastercraftsman {Ire}).

One of last term’s most improved performers, Enbihaar proved a formidable runner when granted suitably lively conditions and a distance of ground and went from success in the G2 Lancashire Oaks to this win and another in Doncaster’s G2 Park Hill S. in September. Third when undone by testing ground in the G1 Prix de Royallieu at ParisLongchamp in October, the same underfoot conditions meant that she was below-par on her return at the July meeting but everything fell perfectly into place for this repeat of 12 months ago. Despite giving way weight-for-age to a younger duo with smart form, the imposing bay never looked likely to become the subject of an upset and is primed for a potentially profitable remainder of the campaign.

That could come over excess of this trip according to the operation’s Racing Manager Angus Gold. “It’s unlike Sheikh Hamdan to keep an older mare in training and I’m glad to see that rewarded with another group win,” he commented. “It’s good to see her show her old enthusiasm and that amazing stride of hers. I’ll talk to John and see what the options are, but Jim said she’ll stay two miles any day. She doesn’t want the ground too soft, but I would have thought the [G2 Qipco British Champions] Long Distance Cup [at Ascot Oct. 17] would be an option.”