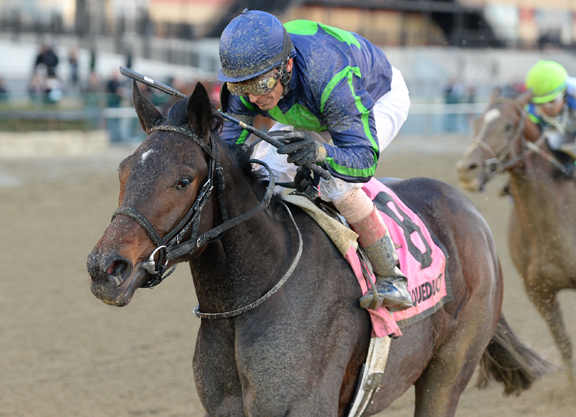 “Team D, obviously, is very important to me,” said Dutrow, the eldest son of the well-respected, late conditioner Dick Dutrow Sr. “Team D allows me and my wife [Kim] to have the horses to train that we want to train. It's all about risk management with Team D. Partners are only allowed to take 10% or 20%–I don't want anyone taking on too much risk. I want to keep it fun. The kind of horse that Team D wants to buy is somewhere between $200,000-$400,000. [Owning horses is] very expensive and I don't want people taking on too much risk, emotionally or financially.”

“Once we find an individual by a stallion that we like, then we'll look at their pedigree,” said the native of Maryland, adding that Bo Hunt of Ocala is an integral member of the team. “Physically, when we saw Mo Town, we were hoping that we could afford him. That was the first thing to come to mind. We were very happy with him physically–he's just the type of athlete that Team D tries to buy.”

When asked how many partners were in on Mo Town, Dutrow responded, “I wouldn't want to miss out on anybody, but there's about seven or eight people in on him.”

Mo Town, bred in Kentucky by John D. Gunther and Eurowest Bloodstock, is the first foal out of the winning Bernardini mare Grazie Mille. His second dam Molto Vita (Carson City), a $24,000 KEENOV purchase by Gunther in 2000, is a GSW/MGISP. Hailing from the second crop of leading young sire Uncle Mo, Mo Town brought $200,000 from Team D at the 2015 Keeneland September Sale.

“When we went and looked at his pedigree, there was no question, it was there,” Dutrow added. “It was only a question if we had enough money to purchase the horse, and fortunately he was well within our budget.”

A useful debut second sprinting at Saratoga in a deep maiden special weight at odds of 7-2 on the GI Travers S. undercard, Mo Town followed with a seven-length tour-de-force when stretched to a one-turn mile in the Belmont mud Sept. 24, good for 'TDN Rising Star' honors. The Coolmore partners bought into the bay prior to his 2 1/2-length tally while making his route debut in the 1 1/8-mile Remsen.

Mo Town has posted four moves at Dutrow's Florida winter base at Payson Park since, headed by a five-furlong bullet in 1:02.40 (1/6) Jan. 31. Dutrow said that Mo Town “will probably end up in the [GIII] Gotham [at Aqueduct Mar. 4],” but his other options could include either the GII Risen Star S. at Fair Grounds Feb. 25 or the GII Fountain of Youth S. at Gulfstream Mar. 4.

Dutrow began working in his father's barn at the age of 10 and also served under the legendary Bobby Frankel before striking out on his own in New York in 1987. He has trained recent Grade I winners such as Embellish the Lace (Super Saver), Grace Hall (Empire Maker), The Big Beast (Yes It's True) and So Many Ways (Sightseeing), and also conditioned Havre de Grace (Saint Liam) at two and three prior to her Horse of the Year campaign in 2011.

“I'm not Bob Baffert or Todd Pletcher by any means, but I've had some nice horses,” Dutrow concluded. “Mo Town has just been fantastic–both physically and mentally. He's growing, filling out, eating great and he's very happy and training terrific. I'm just knocking on wood and so blessed.”