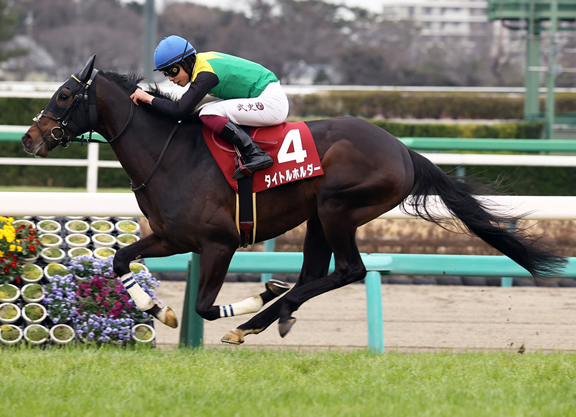 Hiroshi Yamada's Titleholder (Jpn) (Duramente {Jpn}) scored an upset at 16-1 in the G2 Hochi Hai Yayoi Sho Deep Impact Kinen at Nakayama on Sunday. The 2000-metre race is a pointer for the G1 Japanese 2000 Guineas in mid-April.

Away to an alert beginning, the dark bay strolled to the lead and kept a measured gallop throughout while under minimal pressure from his rivals. He slowed the pace after the first few furlongs and the first half of the race went in 1:02.6. Held together expertly at the fence by pilot Hiroshi Yokoyama turning into the stretch, the duo braced for the challenges that were sure to come.

However, second choice Schnell Meister (Ger) (Kingman (GB)}), who had dogged the pacesetter in second the whole way around, was not quite up to the task as the winner had too much gas left in the tank and finished  1 1/4 lengths back in second. He is the second progeny of Juddmonte's high-class miler and young sire to feature in the top two in a major Japanese Guineas prep, as the filly Elizabeth Tower (GB) (Kingman {GB}) had deadheated for the win in the G2 Tulip Sho on Saturday.

Rounding out the trifecta was heavy chalk Danon the Kid (Jpn) (Just A Way {Jpn}), who had stalked from fifth for much of the Nakayama contest and closed to be a neck back of Schnell Meister.

Off the mark locally over 1800 metres in October, the Okada Stud-bred was second in the G3 Tokyo Sports Hai Nisai S. in November and fourth in the Dec. 26 G1 Hopeful S. In the latter two races, he finished behind Sunday's heavy favourite Danon the Kid.

Titleholder is the second black-type winner and first group winner for young sire Duramente, who has his first 3-year-olds this year.

A five-time winner at 1200m, 1800m (twice), 2000m and 2600m, Mowen's best finish in stakes company was a fourth in the Listed Shion S. as a sophomore. Her first foal, the winning Melody Lane (Jpn) (Orfevre {Jpn}) was followed by a dead foal and Titleholder is her third offspring. She has no further produce, but was bred to Gold Ship for 2019, Victoire Pisa (Jpn) for last year and she was covered by Duramente last spring. Under the fourth dam is G1 1000 Guineas heroine On The House (Fr) (Be My Guest).