Dubawi's One Ruler Dominates the Autumn 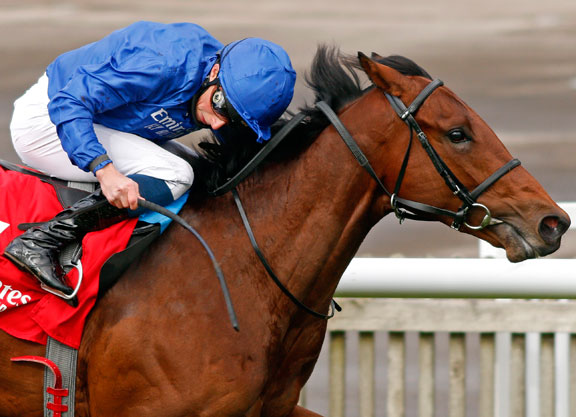 Third in a strong renewal of the seven-furlong Listed Flying Scotsman S. at Doncaster Sept. 11, Godolphin's One Ruler (Ire) (Dubawi {Ire}) showed improvement for the step up to a mile to stamp his class on Saturday's G3 Emirates Autumn S. at Newmarket. Settled in mid-division early racing wide, the 5-1 shot loomed on the outer under William Buick and after taking the lead at the two-furlong pole readily asserted to score by 1 3/4 lengths from Van Gogh (American Pharoah), with another Appleby representative Dhahabi (Ire) (Frankel {GB}) 1 1/2 lengths behind in third. “I think it was a very nice performance on very soft ground and stepping him up in trip has helped,” Buick said. “He probably handled the ground, but will be better on a better surface for sure. The Flying Scotsman at Doncaster was a funny race–I ended up too far back and set him a bit of a task, but today was far more straightforward for him. He showed today that he has improved.”

Brushed aside on debut by the subsequent G3 Solario S. winner Etonian (Ire) (Olympic Glory {Ire}) over seven at Sandown July 23, One Ruler returned to the same course and distance a month later to beat Maximal (GB) (Galileo {Ire}) and Latest Generation (GB) (Frankel {GB}) in a maiden that has proven a rich source of subsequent winners. Taking part in another competitive event in the Flying Scotsman, the bay was hampered late on there when third behind the eventual G2 Royal Lodge S. winner New Mandate (Ire) (New Bay {GB}) but gave the impression he needed another furlong and easier surface. Appleby said, “William feels that the horse has enough pace to be a Guineas contender. His dam Fintry was a group 2 winner over a mile and he is a son of Dubawi who will get stronger over the winter, which could build on his speed. I think he is a horse who we would have to consider strongly for the 2000 Guineas.”

Of the third, who is a half-brother to Golden Horn (GB), he added, “Dhahabi is going to be a mile-and-a-half horse and shaped well over today's trip. It was his third run and he is still learning on the job–he was slow from the gates before travelling into the race well and galloping out strongly. Stepping up in trip is only going to suit and hopefully we will see more improvement as we go further with him.”