Dubawi's Creative Force In Control In The Sprint 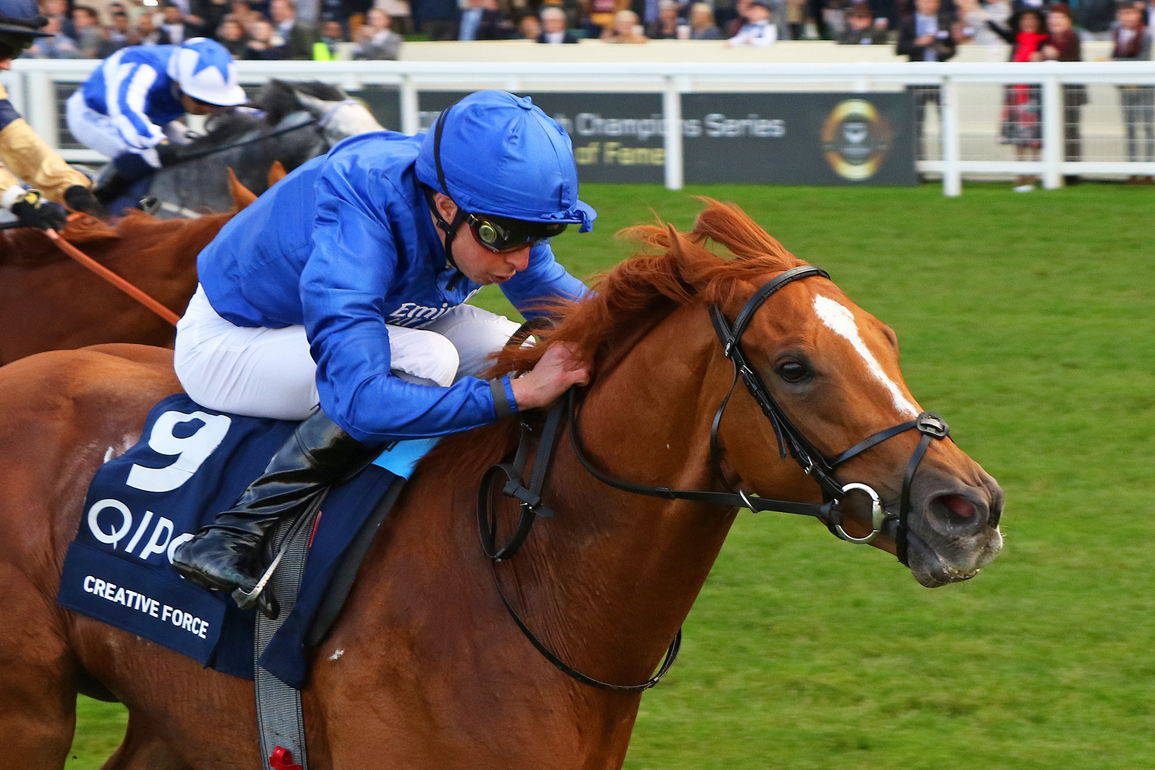 Godolphin's G3 Jersey S. hero Creative Force (Ire) (Dubawi {Ire}) had failed to strike in three outings since registering that June 19 Royal Ascot triumph and went postward for Saturday's G1 British Champions Sprint back at the Berskhire venue coming off a three-length sixth in last month's G1 Sprint Cup at Haydock. Notable as Charlie Appleby's first Champions Day contender, he kept jockey William Buick's jockeys' championship hopes alive with a decisive victory in the six-furlong dash. The €400,000 Goffs Orby yearling had sealed a run of four straight wins in the Jersey and has since run fifth in Newmarket's July 10 G1 July Cup and second contesting Goodwood's July 27 G2 Lennox S. in his penultimate start. The eventual winner was positioned sixth within range of the leaders through the early fractions until making a manoeuvre to slipstream the pacesetting Glen Shiel (GB) (Pivotal {GB}) at the quarter-mile marker. Easing out of that rival's wake to seize control approaching the final furlong, the 11-2 chance was not for catching thereafter and was ridden out in the closing stages to hit the line with a one-length advantage as low-drawn runners dominated. Shadwell's Minzaal (Ire) (Mehmas {Ire}) closed late to finish a length behind Glen Shiel in third while King Power Racing's 3-1 favourite Art Power (Ire) (Dark Angel {Ire}) was compromised by his stands' side drawn and ran on strongly to fail by head for third.

“I'm delighted, it's a great team result, it's been a great season and this lad deserves it,” beamed trainer Charlie Appleby after marching to the cusp of a first trainers' championship. “James Doyle felt he was a sprinter earlier this season and I was confident with this horse after Haydock, where the ground was too fast for him. I'm delighted for the horse because he has been on the go all year. He was out at the Craven Meeting and rose through the ranks and came here to win the Jersey at the Royal meeting. We've been lucky with the likes of Blue Point at this level and this guy can travel for fun. William [Buick] was confident riding him and he has won over seven furlongs here, so he wasn't going to stop. This was my first runner at Champions Day, it's a fantastic crowd and the sun is shining down. It's soft ground and that is what we expect at this time of year, but it is not dead ground as they are going through it. Creative Force is a typical Dubawi who should get better with age and the sprint division is there for someone to take the mantle next year. We've been looking for a new star sprinter since Blue Point was retired and this horse can be a fun horse for the next year or two. There's a hole there to be filled and I think he is a young enough horse to do that.”

“Creative Force won the Jersey here and goes through that ground, which is a big help, and he really did deserve it,” said rider William Buick, who would ultimately finish two winners shy of sharing the jockeys' championship with Oisin Murphy. “The ground was very fast and he stumbled out of the stalls at Haydock. It's game over if you stumble out of the stalls in a six-furlong Group 1, but he did get himself back into it and he ran well. Today's race worked out perfectly as we had a nice draw and I liked the look of it. It worked out how I wanted it to and he was in good form going into it. He certainly deserved it, but we thought it was a good chance for him to show his best today. There were a lot of runners and they all turned up, but he travelled into it very smoothly and it was a case of just waiting with him a little bit.”

Reflecting on Buick's failed title challenge, Appleby said, “I think it's something that William himself will say he has enjoyed and it's all very well riding these good horses at the big meetings, but he's been mucking it out round the smaller tracks. Success breeds success and you can't beat having winners so William riding more has given him more opportunity to ride more winners and I think we've seen a better rider. He has always been a rider at the top of his game, but now he's riding so many of these horses and so many different types of horses. I noticed at the back end of last year his style of riding was changing and we've seen that hunger this year. Win, lose or draw, William isn't going to walk away deflated from what he's achieved this year. He has that character that he will go forward again and do the same next year. For me, he's a huge part of the team and the more winners he rides, the happier I am. It's a sporting industry and the last thing you want is someone who is sat on the bench for the week and then coming out on the weekend. It's alright when you do it at a certain level of your career, but William is too young to be doing that just yet.”

Archie Watson was far from downhearted with the display of runner-up Glen Shiel, who also ran second in this year's G1 Diamond Jubilee S. at the Royal meeting. “He does come alive here, that's his second Group 1 second place here this year and I am delighted,” the trainer said. “The first-time blinkers worked, they really lit him up and he jumped and travelled very well. He quickened away and just found one very good horse of Charlie's to beat him. He's just a dream for the owners to have and a dream for us to have.”

Hollie Doyle, who took the meeting opener aboard Trueshan (Fr) (Planteur {Ire}) in the G1 British Champions Long Distance Cup, made a bold attempt to lead out from the front on 22-1 chance Glen Shiel (GB) (Pivotal {GB}), but was denied by a superior force on the day. “It was another brilliant run from Glen Shiel and he is such a credit to connections,” she commented.