Dubawi on Top Again as Arqana Lights Up 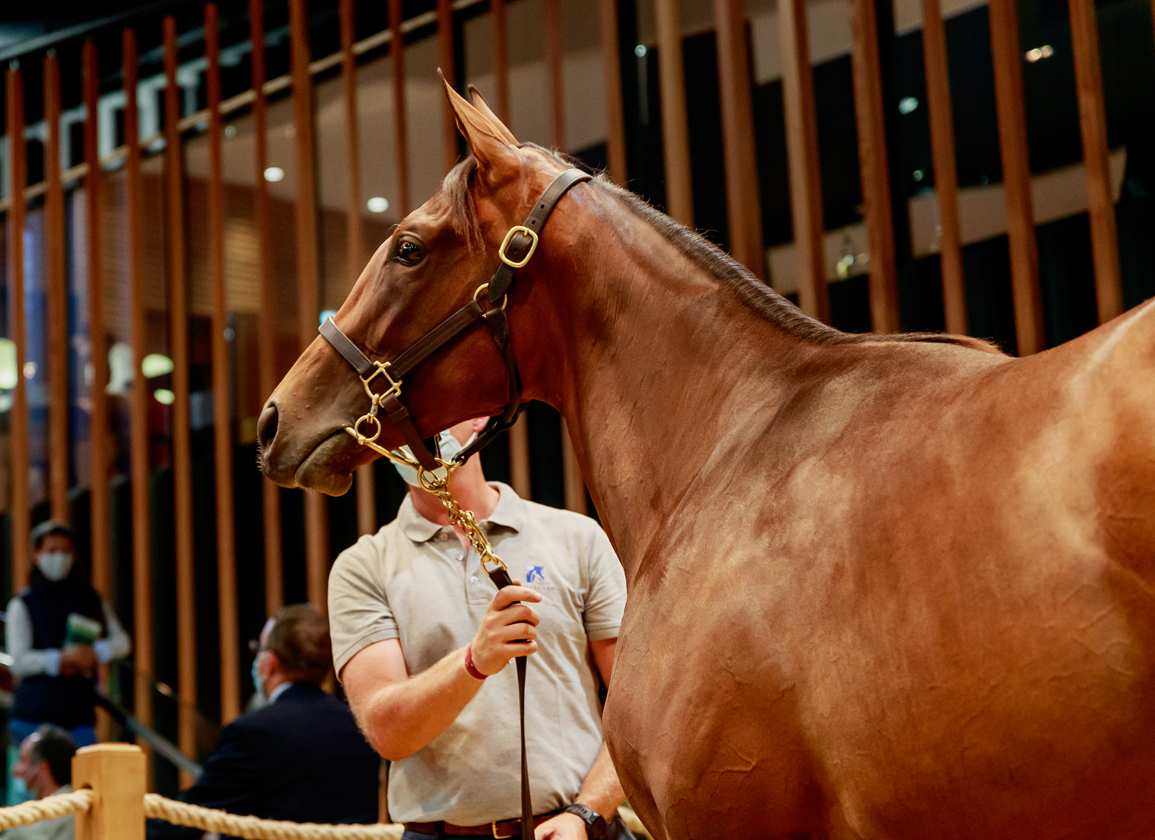 DEAUVILLE, France–The second and final session of the select part of the Arqana August Sale lit up in ebullient fashion with two seven-figure yearlings, including the €2.4-million sale topper by Dubawi, a half-sister to Group 2 winner Babylone (Fr) (Invincible Spirit {Ire}).

Charlie Gordon-Watson made a significant impact on the day's action when acting for an unnamed client and signed for the filly (lot 108) out of Typique (Ire) (Galileo {Ire}) shortly after bidding €525,000 for lot 99, a filly by Frankel (GB).

The sale leader was consigned by Haras d'Etreham for relatively new breeder Thierry Gillier of Haras Voltaire, who bought Typique, a daughter of G1 Prix Marcel Boussac winner Denebola (Storm Cat), at the Goffs November Sale of 2016 for €450,000 through Laurent Benoit's Broadhurst Agency.

“It's just such a fantastic Niarchos family with Group 1-winning 2-year-olds as the second and third dams, and she's beautiful. She's the best-looking Dubawi filly I've ever seen and the mare's first two foals both look pretty good,” said Gordon-Watson.  “André Fabre loved her and he will train her.”

The filly's page boasts plenty of depth, with Group 1 winners Senga (Blame), Coup De Genie (Mr. Prospector), Machiavellian (Mr. Prospector), Bago (Fr) (Nashwan) and Maxios (GB) (Monsun {Ger}) all prominent. Furthermore, Typique, who achieved little on the racecourse in her two starts, has made a promising start to her broodmare career. Her first foal Babylone (Fr) (Invincible Spirit {Ire}), who is also trained by Fabre, has won three of her five starts in her breeder's colours, most recently landing the G2 Prix de Malleret at Longchamp in July. Her year-younger full-sister Assyrian Queen (Fr) made a promising debut when second at Deauville on Aug. 5.

Nicolas de Chambure, who consigned the filly on Gillier's behalf through his Haras d'Etreham, said, “All the credit is for Haras Voltaire. They did the mating: it's a new owner with a new team on a new farm and it is great to see a result like this. They bought an expensive mare and they have been rewarded for their investment in French breeding. We just feel very grateful that they trusted us with this lovely filly. She is going to a great owner and it is nice to see fillies like this going to people with a long-term plan.”

He said, “We love Frankel and this is a wonderful family. She's a late foal and she will only improve. She will be trained by John Gosden.”

Born on Apr. 29, the bay is a daughter of Sotka (GB) (Dutch Art {GB}), a listed-placed sister to the crack sprinter Sole Power (GB) (Kyllachy {GB}), and she was bred at Monceaux by Zalim Bifov.

It didn't take long for the seven-figure barrier to be breached again and that came a few moments after lot 152 entered the ring. Ecurie des Monceaux already has one Siyouni (Fr) colt from a Galileo (Ire) mare as a poster boy in last season's Arc winner Sottsass (Fr), and hopes will be high that the colt by the same sire out of Highland Reel's full-sister Cercle De La Vie (Ire) can rise to a similar level after being purchased for €1.5 million by Oliver St Lawrence.

“He was a standout colt with a great update,” said St Lawrence of the yearling. “The 2-year-old looks a proper horse and if he could be as good as him then we've done our jobs. I suspect he will be trained in England. He's been bought for Fawzi Nass.”

St Lawrence made his presence felt at last year's Select Sale and he has done the same again with the sale now reverted to its August slot. At the end of the first two days he was the leading buyer, with five yearlings bought for €3,335,000.

He also signed for the most expensive yearling by Coolmore freshman Saxon Warrior (Jpn) at €370,000. Lot 135 was consigned by Haras de Bourgeauville and is a son of the dual listed winner Artistic Jewel (Ire) (Excellent Art {GB}).

Juddmonte makes only selective forays into the yearling market and one of the world's best breeding operations dipped in at Arqana for another daughter of Dubawi (lot 117) offered by Haras de l'Hotellerie on behalf of breeders Manfred Wurtenberger and Reinhard Stockli.

It took a bid of €900,000 from Simon Mockridge to secure the half-sister to G1 Criterium de Saint-Cloud winner Wonderment (Ire) (Camelot {GB}). Her dam Wiwilia (GB) (Konigstiger {Ger}) was a dual winner in Switzerland and is a half-sister to the GI Man O'War S. winner Wake Forest (Ger) (Sir Percy {GB}).

“She's a beautiful filly, very easy moving,” said Mockridge, “There are Group 1 winners under the first three dams and she has a lovely outcross pedigree for our broodmare band in time.”

The filly's sale represented the highest price achieved by the Garcon family of Haras de l'Hotellerie in nine years of consigning at Arqana.

“We are very happy that she has been bought by such a good breeder,” said Guillaume Garcon. “It is the first time Juddmonte has bought from us and it is very exciting to know that she is going to such a good place. The last time we sold a yearling by Dubawi he was a Group 1 winner [Mubtaahij (Ire)] and we hope for the same for this filly.”

The Hotellerie team has also sold the two most expensive yearlings in Europe by Coolmore's first-crop sires U S Navy Flag and Mendelssohn over the last two days. The latter, lot 90, was bought for €235,000 by Daithi Harvey and Lindsay Laroche's Highland Yard and will be trained for Laroche by Nicolas Clement.

Anthony Stroud had been one of the unsuccessful bidders on the day's top lot but it wasn't long before the agent had his way when in pursuit of Haras de Saint Pair's Kingman (GB) colt (lot 113) out of the listed winner Via Pisa (Fr) (Pivotal {GB}).

Having bought Saturday's session-topper, a Kingman half-sister to Native Trail (GB), for €950,000, the agent went to €850,000 for the colt, bred by Andreas Putsch in Normandy from a half-sister to the treble Japanese Grade 1 winner Admire Mars (Jpn) (Daiwa Major {Jpn}).

“He's an athletic colt from a very organic farm in Haras de Saint Pair,” said Stroud, who has bought six yearlings for Godolphin over the last two days for €3,220,000.

The consignor is in its usual slot at the head of the vendors' leaderboard with 28 yearlings sold for €8,507,000.

A yearling by France's champion sire Siyouni was also on the shopping list of the Coolmore team, which stands the stallion's Arc-winning son Sottsass (Fr) and went to €650,000 for another colt by him from the Ecurie Des Monceaux draft.

Lot 160 is the first foal of Correze (GB) (Shamardal), whose lone win may have come in the provinces but she has plenty to recommend her on paper as a daughter of the G3 Nell Gwyn S. winner Cloud Castle (GB) (In The Wings {GB}). She is also a half-sister to three stakes winners from a family which includes the high-class siblings Luso (GB) and Warrsan (Ire).

It was perhaps not a surprise to see MV Magnier come out on top of a bidding duel for Haras de Montaigu's Galileo half-sister to the Derby winner Wings Of Eagles (Fr) (Pour Moi {Ire}).

Having gone to €500,000 to buy the grey filly (lot 120) from the Forien family, he said, “She comes from a great breeder with a great history and she was a lovely filly. Let's hope she can run.”

The family has received further updates this season through the exploits of G2 Prix Greffulhe winner Baby Rider (Fr) (Gleneagles {Ire}), who is out of the filly's half-sister Gyrella (Fr) (Oasis Dream {GB}).

Father And Son Backed By Skiffington

Among three purchases at Arqana August, agent Amanda Skiffington signed for two of the more expensive yearlings of the day by Wootton Bassett (GB) and his son Almanzor (Fr) at €500,000 and €450,000, respectively.

Both were bought for Fiona Carmichael, with the colt by Wootton Bassett (lot 146) being the first foal of listed runner-up Bhageerathi (Ire) (Motivator {GB}). He was offered by Anna Sundstrom of Coulonces on behalf of Haras de Saint Laurent.

“He's just a really lovely colt by a horse I think is a seriously good stallion,” said Skiffington. “That's the sort of price you have to go to to buy a horse like that.”

Another half-sister, Poetic Dream (GB) (Poet's Voice {GB}), won the G2 Mehl Mulhens-Rennen and their dam Zain Al Boldan (GB) (Poliglote {GB}) was useful in her day as the winner of the Lingfield Oaks Trial.